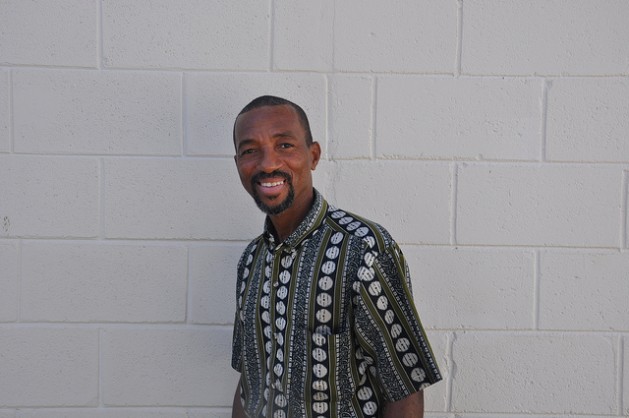 ST. JOHN'S, Antigua, Feb 10 2015 (IPS) - At 49 years old, Edison Liburd has established himself as one of Antigua and Barbuda’s most recognisable artists. But Liburd was not always in the spotlight. In fact, you could say he was a man in hiding.

“I have been infected with the HIV virus for about 24 years. I got my first HIV test done in February of 1993 at the Allen Pavilion Hospital in Manhattan New York,” Liburd told IPS.

"Equity and social justice are very important as we respond to the HIV/AIDS epidemic. HIV is as much a social and developmental disease as a medical one." -- Eleanor Frederick

“I can remember that day vividly. I felt like the earth had been removed from beneath me when I was handed the results of the test.”

HIV/AIDS first emerged in the 1980s, and now, more than three decades later, stigma associated with the disease has persisted. Liburd pointed to that sigma as the main reason why he concealed his HIV status for as long as he did.

“I hid my status for years from family. I told a few friends, but most people who I knew did not know anything about my health condition. It was fear of being ostracised that kept me from disclosing my status,” he said.

“In Antigua, HIV infected individuals still have to face job insecurity – first to be fired and last to be hired. Stigma and discrimination is still high because many still think themselves superior to individuals who are infected.

“Somehow they think themselves better than, but I believe that it is when infected individuals become empowered by taking hold of their health and indispensable to nation building that this will take a huge bite out of discrimination. People will begin to see you differently,” Liburd said.

The Caribbean is one of the most heavily affected regions in the world, with adult HIV prevalence about one percent higher than in any other region outside sub-Saharan Africa.

The HIV pandemic in the Caribbean is fuelled by a range of social and economic inequalities and is sustained by high levels of stigma, discrimination against the most at-risk and marginalised populations and persistent gender inequality, violence and homophobia.

The main mode of transmission in the Caribbean is unprotected heterosexual intercourse – paid or otherwise. Sex between men is also thought to be a significant factor in several countries, although due to social stigma, this is mainly denied.

The level of stigma and discrimination suffered by those infected and affected by the virus in the Caribbean helps drive the epidemic underground. This makes it difficult to reach many groups.

After facing the worst of his fears, being hospitalised and getting close to death’s door, Liburd has “resolved to fight back against the discrimination by increasing my capacity to help others in every way through my gift of art and my voice on and in the media, in church and otherwise.

“This has really been a powerhouse for me. I have become more confident and bold when faced with opposition. It has and is still more than ever being a source of inspiration and encouragement for many who hear my story, both infected and non-infected alike.”

Executive director of the Antigua and Barbuda HIV/AIDS Network (ABHAN), Eleanor Frederick, said individuals living with HIV face many challenges such as unemployment, homelessness, and in some cases, they are abandoned by their families.

She said there are also other issues that are faced by some individuals “such as stigma, discrimination, resource shortage and social marginalisation” depending on the community with which they identify such as sexuality, gender, commercial sex workers, men who have sex with men, drug users and prisoners.

“Many individuals are reluctant to start treatment because of the myths and stories about HIV and AIDS,” Frederick told IPS. “Healthcare providers, peers and treatment navigators can help individuals to understand, the barriers and how to overcome them.”

ABHAN has a Peer/Buddy HIV Treatment Adherence Programmme which recruits, monitors and retains patients into treatment and care and ensures that they adhere to their treatment regimen. It also delivers a comprehensive package of services, including case management, leading to decreased risky sexual behaviour, improved immune system functioning, and general health improvement.

“The programme provides direct support services by specially trained ABHAN and American University of Antigua Medical School (AUA) student volunteers, in the form of social interaction, emotional support, monitoring of medication adherence, and facilitation of health care concerns to persons living with HIV and AIDS, and to members of their families,” Frederick told IPS.

At the country level, she said while there is legislation which specifically addresses the treatment of employees living with HIV/AIDS, it is not always followed.

“A pilot programme was undertaken in 2012. The intention was to encourage the implementation and observance of the standards set out in the International Labour Organisation (ILO) code of practice on HIV/AIDS and the world of work, the ILO Recommendation No. 200 as well as the National Tripartite Workplace Policy on HIV and AIDS in Antigua and Barbuda; based on the universal human rights standards applicable to HIV and the world of work,” Frederick explained.

“Individuals have lost their jobs because of their HIV status and others have been asked to take an HIV test when it was suspected that they were possibly infected.”

The ABHAN executive director said HIV should be everyone’s concern, because “HIV does not discriminate, and knows no borders.”

She added that “equity and social justice are very important as we respond to the HIV/AIDS epidemic. HIV is as much a social and developmental disease as a medical one.

“Therefore, I would like to encourage everyone to help improve the quality of life for people with HIV and AIDS and increase compassion for them and their loved ones by providing vital human services for those in need of it based on a philosophy of non-judgmental support as practiced by ABHAN.”