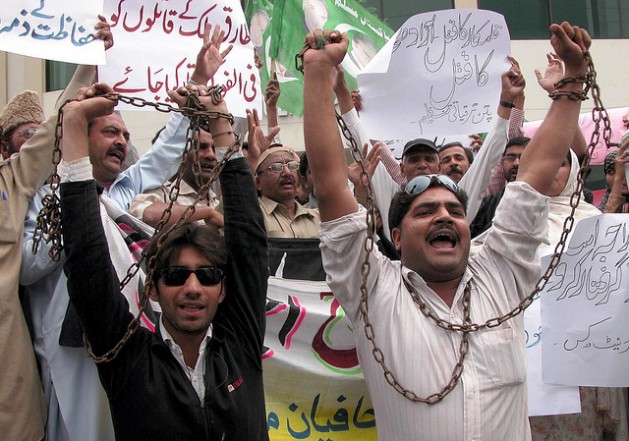 Journalists in Pakistan protest against the killing of their colleagues. Credit: Rahat Dar/IPS

PESHAWAR, Pakistan, Feb 20 2015 (IPS) - It is no surprise that most Pakistani journalists work under tremendous stress; caught between crime lords in its biggest cities, militant groups across its tribal belt and rival political parties throughout the country, censorship, intimidation and death seem almost to come with the territory.

But while many have become accustomed to working with a degree of fear and uncertainty, none could have been prepared for the number of tragedies that unfolded in 2014, the worst year ever for the media in Pakistan.

All told, last year saw the deaths of 14 journalists, media assistants and bloggers, while dozens more were injured, kidnapped or intimidated.

Reports by rights groups here point to a culture of impunity that is rendering impossible the notion of a free press, which activists and experts say is crucial to development and peace in a country mired in poverty and conflict.

“Pakistan’s media community is effectively under siege. Journalists, in particular those covering national security issues or human rights, are targeted from all sides in a disturbing pattern of abuses carried out to silence their reporting." -- David Griffiths, Amnesty International’s deputy Asia-Pacific director
A report released last month by the Pakistan-based Freedom Network (FN) documents numerous assassinations and attacks including the Jan. 1 shooting of Shan Dahar, a reporter with Abb Takk Television in Larkana, a city in the southern Sindh Province.

At the time of his death, the reporter had been working on a story about Pakistan’s sprawling black market for unregulated drugs; some believe that those with vested interests in the industry had a hand in his death.

Other documented deaths include the Jan. 17 killing of Waqas Aziz Khan, Ashraf Arain and Muhammad Khalid in a suburb of Karachi when gunmen opened fire on a media van used for live transmissions by Express TV.

While none of those killed were journalists – one was a security guard, one a driver and the other a technician for Express TV – activists here say their deaths represent the deadly climate for anyone involved, however remotely, with the press.

The FN report tracks patterns and challenges ahead for the industry in Pakistan, including trends such as the invocation of laws on blasphemy and treason to intimidate media houses, and the use of crippling fines and blanket bans on coverage that have forced many outlets to practice self-censorship in an effort to stay afloat.

In what the Pakistan Press Foundation (PPF) called a “chilling” example of these laws, last November one of the country’s Anti-Terrorism Courts sentenced four citizens to 26 years each in prison, plus a 12,800-dollar fine apiece, for airing a “contentious” television programme, supposedly in violation of Pakistan’s blasphemy laws.

Other incidents that have media workers here on edge include the April 2014 assault on Hamid Mir, a senior reporter for Geo TV, who was fired at by gunmen on motorcycles while on his way from the airport to his office in Karachi.

Though he survived the attack, and his since undergone a successful operation, his assailants are still at large, and the threat to his life is still very much alive.

Mazhar Abbas, a former president of the Pakistan Federal Union of Journalists, tells IPS that the government’s inability to ensure freedom of expression has put reporters in an extremely difficult situation.

“The problem is that nobody knows who is killing the journalists,” he says. A complete dearth of official information on the perpetrators, combined with a lack of proper investigations, means that far too many journalists continue to operate within a climate of uncertainty and impunity, experts say.

In the northern Federally Administered Tribal Areas (FATA), journalists suffer constant threats and attacks from the Taliban and other militant groups that have operated on the border of Afghanistan since fleeing the U.S. invasion of their country in 2001.

Since the War on Terror began, 12 journalists in FATA have lost their lives, while scores of others have fled to Peshawar, capital of the neighbouring Khyber Pakhtunkhwa province.

For others, being out of reach of terrorist groups does not necessarily guarantee security. According to Amnesty International, hundreds of journalists in Pakistan experience threats, harassment and violence, sometimes even at the hands of the intelligence services.

The rights group’s recent report, ‘A Bullet has Been Chosen for You’, presents 34 cases in which journalists have been killed in retaliation for their work since 2008; only one of the perpetrators has been booked for the crime. The report blasts the authorities for failing to stem the bloody wave of violence against media workers, which activists say constitutes a grave violation of human rights.

The Committee to Protect Journalists (CPJ) estimates that 56 journalists have been killed in Pakistan since 1992. This figure, however, includes only those cases in which there was a clear motive for the death; activists here believe the true number of murders could be much higher.

Even those who aren’t killed exist in a kind of grey space, where they constantly fear reprisals for investigations or exposures that implicate any number of political actors.

“Pakistan’s media community is effectively under siege,” said David Griffiths, Amnesty International’s deputy Asia-Pacific director, when the report was released last year. “Journalists, in particular those covering national security issues or human rights, are targeted from all sides in a disturbing pattern of abuses carried out to silence their reporting.

“The constant threat puts journalists in an impossible position, where virtually any sensitive story leaves them at risk of violence from one side or another,” he added.

In a country that is ranked 126th on Transparency International’s Corruption Perceptions Index (CPI), just a few places ahead of nations like Myanmar, Afghanistan and North Korea, experts say that a free press is essential to educating the public and exposing fraud, theft and rights violations on a massive scale.