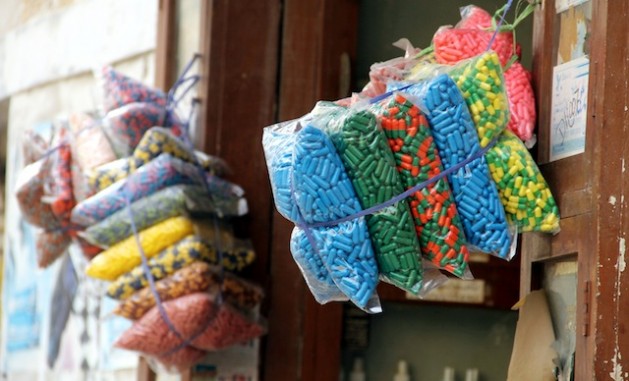 KARACHI, Dec 14 2012 (IPS) - When 26-year-old Muhammad Qasim, a rickshaw driver from Lahore’s low-income Shahadra settlement, died last month, his family was shocked to learn that the cause of death was an overdose – of cough syrup.

On Nov. 23, shortly before going to bed, Qasim drank a whole bottle of Tyno cough syrup, which he was in the habit of doing on a somewhat regular basis.

A little while later, his mother heard strangled noises coming from his bedroom and ran in to see him foaming at the mouth. He was rushed to the hospital, where he died soon after.

Qasim’s death brought the total number of overdose fatalities up to 19 in the month of November alone. According to the police, most of the victims consumed Tyno regularly.

However, results from Qasim’s postmortem found that the actual cause of death was not simply an overdose, but asphyxia – a deficiency of oxygen in the body caused by, among other things, the presence of a toxic substance in the bloodstream.

The tragedy has rekindled public discourse on drug regulation in the country, and highlighted the need to fine-tune the Drug Act of 1976, which has consistently failed to stem the proliferation of counterfeit drugs in the market.

Against the backdrop of the Isotab drug scandal last January, in which 125 patients in Lahore died after consuming adulterated heart medication, it is becoming increasingly clear that the market is awash with substandard drugs that don’t meet the required standards.

These imitation drugs are sold openly in bazaars and shops around the country.

Though statistics on fake drugs are hard to come by, the World Health Organisation estimated back in 2004 that 40 to 50 percent of drugs consumed in Pakistan were counterfeit. In 2006 the country was ranked 13th on a list of the world’s leading producers and sellers of fake medicines.

Nadeem Iqbal, head of the Islamabad-based Network for Consumer Protection, told IPS, “It’s a huge problem and one which cannot be ignored.” Yet, very little punitive action has been taken against those involved in this fraudulent business, he added.

Furthermore, the market is highly resistant to monitoring and quality control.

Despite a public outcry – led by the media and consumer protection groups – Iqbal is convinced that the situation will not change until “proper laboratory testing facilities” become available.

A slew of drug-related deaths triggered a move towards the establishment of the Drug Regulatory Authority of Pakistan (DRAP), which the president signed into being last month, to control the country’s pharmaceutical industry and ensure proper licencing, pricing and quality control of drugs.

According to National Regulations and Services Minister Firdous Ashiq Awan, “No pharmaceutical company owner will be considered for membership of the Authority’s (public) board.”

While acknowledging that this is a move in the right direction, many  experts are sceptical that the newly formed agency will be able to bring the drug industry to heel.

“This agency requires transparency in governance. People should be taken on board (based) purely on merit and should be technically competent, otherwise there is danger of (the agency) falling prey to vested interest groups,” Dr Sania Nishtar, founder of the Islamabad-based non-profit health policy think tank Heartfile, told IPS.

In addition, existing laws need to be properly imposed by increasing the inspection force, speeding up court processes and handing out tougher punishments, according to experts in the medical field. Under the 1976 Drug Act, the maximum punishment for counterfeiting is ten years’ imprisonment and a fine, depending on the nature of the crime; but this sentence has yet to be handed down to a single perpetrator.

Nishtar hopes the DRAP will bring about amendments in the drug law, which has “many exploitable gaps” and requires massive amounts of resources and technical expertise in order to become a truly independent body, capable of superseding corporate agendas.

Additionally, the number of drug inspectors, pharmacists and testing laboratories needs to be increased exponentially.

At the moment the country has a field force of 250 drug inspectors to monitor over 400 pharmaceutical companies and 50,000 pharmacies, according to Nishtar. “Not only are these numbers paltry, but even (inspectors’) expertise is weak,” she pointed out.

Only 200 trained pharmacists are spread out between the country’s 50,000 chemists’ shops. “It would take the country more than 20 years to train pharmacists for these outlets,” Nishtar said. “I am not sure if the country has the capacity to do that.”

A 2001 survey of 311 of the 506 pharmacies in the garrison city of Rawalpindi, published in the International Journal for Health Care, showed that only 19 percent of pharmacies met licencing requirements, only 22 percent had qualified pharmacists, only 10 percent had temperature monitoring and only four percent possessed an alternative supply of electricity for refrigerators.

The research concluded that most drug sellers had “fragmentary knowledge regarding drug dispensing and storage, and improper dispensing practices”.

DRAP should undertake the task of setting up a network of state-of-the art drug testing laboratories at the provincial level in an attempt to quickly identify the efficacy and quality of all ingredients used, strengthen pharmacists’ capacity, and promote the production of low-cost generic medicines that can be made available to the poor, said Hashmi.

According to the WHO’s ‘World Medicines Situation Report’, Pakistan spends 77 percent of its healthcare budget on buying medicines. But many consumers end up purchasing fake drugs, which have not been properly tested or have passed their sell-by date.