With Mar. 3 designated as World Wildlife Day, Bradnee Chambers, Executive Secretary of the United Nations Environment Programme’s Convention on the Conservation of Migratory Species of Wild Animals, examines the problem of wildlife crime from the angle of asking what the individual citizen can do to help fight to save our living natural heritage. 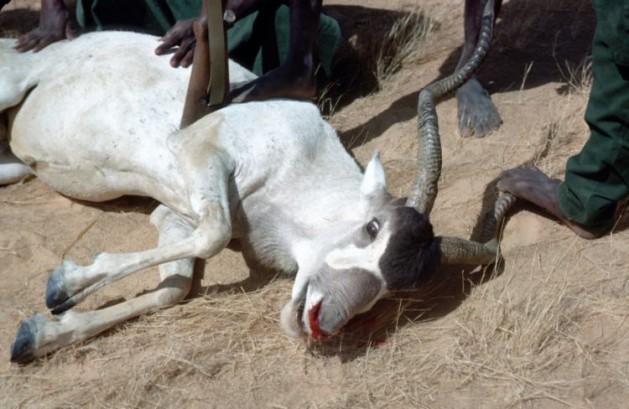 Dead addax (white antelope) hunted by soldiers in Chad – “We should not underestimate the seriousness of wildlife crime”. Credit: John Newby/SCF

BONN, Mar 1 2015 (IPS) - It is no exaggeration to say that we are facing a “wildlife crisis”, and it is a crisis exacerbated by human activities, not least criminal ones.

Whatever our definition of wildlife crime, it is big business. In terms of annual turn-over it is up there narcotics, arms and human trafficking – and the proceeds run into billions of dollars each year, helping to finance criminal gangs and rebel organisations waging civil wars.

“Whatever our definition of wildlife crime, it is big business. In terms of annual turn-over it is up there with narcotics, arms and human trafficking – and the proceeds run into billions of dollars each year”

With seven billion people on the planet, it is tempting to shrug one’s shoulders and ask “What difference can any one individual make?”  Such an attitude means that we are in danger of repeating the “tragedy of the commons” – everyone making seemingly rational decisions in their own immediate interests – but this is a short-sighted approach that undermines the common good and ultimately sows the seeds of its own downfall.

With seven billion people on the planet, it is also tempting to say that people’s need for food, shelter and well-being should take precedence over nature conservation, but the two are not necessarily irreconcilable.  In fact far from it – the two often go hand in hand and are totally compatible – non-consumptive use of wildlife, such as whale-watching and safaris, provide sustainable livelihoods for thousands of people.

Extinction has been an ever-present phenomenon, with a few species losing their specialised niche or being edged out to a more aggressive competitor or, in the case of dinosaurs, being wiped out by a meteorite strike.

The number of species going extinct is increasing fast, at a rate that cannot be attributed to natural causes and it is clear that there is a human foot pressing down heavily on the accelerator pedal.

South Africa reports record numbers of rhinos killed for their horn; demand for ivory is pushing the elephant to the brink; tiger numbers might have risen in India of late but the wild population and the range occupied by the cats are a fraction of what they were at the beginning of the twentieth century.

And we are not just losing vital pieces in the elaborate jigsaw puzzle of ecosystems; we are losing elements of our natural heritage that contribute to human culture and society, and the lifeblood of sustainable activities that create employment in the tourism sector, generating foreign exchange and significant tax revenues.

Wildlife crime is not an abstract. It affects us all and there is more that individuals can do to make a difference than they perhaps imagine.  Understanding the consequences of killing the animals and highlighting the connection between the increased poaching and organised criminal gangs and terrorists have been extremely helpful in strengthening  political messages and in persuading  the public to demand that more be done.

The gangs care little about the fate of the animals – either the individuals they kill or the survival of the species.  They think nothing of shooting the rangers who stand in their way.  They do care about their profits and high demand for ivory in East Asian markets has sent the price through the roof – not that the poacher in the field or the craftsman in the backstreet workshop receive much of a share.

If demand evaporates, the price will fall and killing elephants for their ivory will no longer be a viable business. The gangs will have to find some other source of income, but they would have to do this soon anyway, as current levels of poaching mean that there will not be any elephants left in 30 years.

The maxim “get them while they are young” applies to many things, not least the environment and junior members of the household often influence the family’s behaviour with regard to recycling, saving energy and water, food purchases and a range of other “green issues”. So raising awareness among the younger generation of the need to tackle wildlife crime is crucial.

The fight against wildlife crime has to be conducted on several fronts.  It does register on governments’ radar and pressure from civil society can help keep it high on the agenda.  The public has a vital role to play in keeping pressure on governments, either individually or through local pressure groups and NGOs. People can also modify their own behaviour by minimising their footprint on the planet.

We should not underestimate the seriousness of wildlife crime, but nor should we dismiss the potential impact of the actions of individuals as consumers, customers or voters.