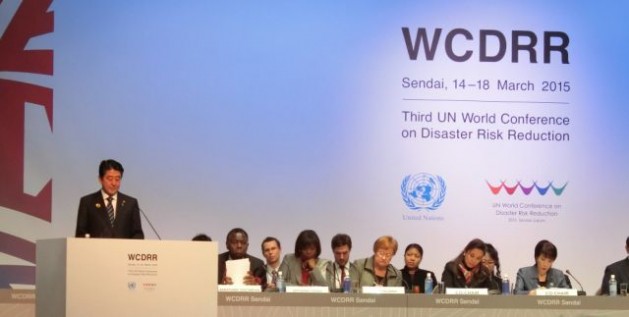 SENDAI, Japan, Mar 16 2015 (IPS) - Women play a critical role in reducing disaster risk and planning and decision-making during and after disasters strike, according to senior United Nations, government and civil society representatives.

In fact, efforts at reducing risks can never be fully effective or sustainable if the needs and voices of women are ignored, they agreed.

Even at risk of their own health and well-being, women are most heavily impacted but often overcome immense obstacles to lead response efforts and provide care and support to those hit hard by disasters, said participants in a high-level multi-stakeholder Partnership Dialogue during the Third World Conference on Disaster Risk Reduction (WCDRR) in Sendai, Japan, from Mar. 14 to 18.

In an interview with IPS, UNFPA Executive Director Babatunde Osotimehin said the Sendai Conference offers “a new opportunity for the world to galvanise around a common disaster risk reduction agenda and commit to collective actions that put women at its centre”.

The fact that serious gaps remain in the area is not for lack of guidance and tools on relevant gender-based approaches and best practices. What is needed is requisite political will to make sure that women’s voices were enhanced and participation ensured. All such efforts must bolster women’s rights, included sexual and reproductive health rights, he said.

Osotimehin pleaded for key actions at all levels, and stressed that dedicated resources are lacking and as such, money must be devoted to disaster risk reduction and women must be empowered to play a real role in that area.

He pointed out that sustained and sustainable disaster risk reduction requires an accountability framework with indicators and targets to measure progress and ensure that national and local actors move towards implementation.

A physician and public health expert, before Osotimehin became UNFPA chief in January 2011 in the rank of Under-Secretary-General of the United Nations, he was Director-General of Nigeria’s National Agency for the Control of AIDS, which coordinates HIV and AIDS work in a country of about 180 million people.

As several other speakers and heads of governments also emphasised in several other fora, Cousin said the WCDRR is the first of a crucial series of U.N.-backed conferences and meetings set for 2015 respectively on development financing, sustainable development and climate change, all aimed at ensuring a safer and more prosperous world for all.

Japanese Prime Minister Shinzo Abe echoed similar sentiments in a keynote address. He said that Japan had long understood the importance of enhancing the voice, visibility and participation of women.

For example, if a disaster struck during the middle of the day, most of the people at home would be women so their perspective is essential “absolutely essential for restoring devastated”.

“’No matter how much the ground shakes, we will remain calm in our hearts,’” said Prime Minister Abe, quoting the powerful words of women in one of the districts he had visited in the wake of the March 2011 earthquake and tsunami, and pledging Japan’s ongoing strong commitment to ensuring all women played a greater role in disaster risk reduction.

Abe announced that boosting women’s leadership in disaster risk reduction would be a key element of the country’s new programme of international support.

Abe said, “We are launching concrete projects in nations around the world” and would build on existing efforts to promote women’s leadership in disaster risk reduction in such partner countries as Fiji, Solomon Islands, and other Pacific island nations.