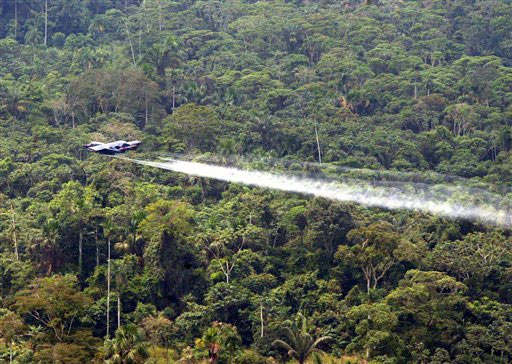 BUENOS AIRES, Apr 28 2015 (IPS) - After the World Health Organisation (WHO) declared glyphosate a probable carcinogen, the campaign has intensified in Latin America to ban the herbicide, which is employed on a massive scale on transgenic crops.

In a Mar. 20 publication, the WHO’s International Agency for Research on Cancer (IARC) reported that the world’s most widely used herbicide is probably carcinogenic to humans, a conclusion that was based on numerous studies.

Social organisations and scientific researchers in Latin America argue that thanks to the report by the WHO’s cancer research arm, governments no longer have an excuse not to intervene, after years of research on the damage caused by glyphosate to health and the environment at a regional and global level.

“We can no longer accept the use of these poisons because they destroy biodiversity, aggravate climate change, destroy the soil’s fertility, and contaminate the water and even the air. And above all, they bring more illness, such as cancer. “ -- Joao Pedro Stédile

“We believe the precautionary principle should be applied, and that we should stop accumulating studies and take decisions that could come too late,” said Javier Souza, coordinator of the Latin American Pesticide Action Network (RAP-AL).

The precautionary principle states that even if a cause-effect relationship has not been fully established scientifically, precautionary measures should be taken if the product or activity may pose a threat to health or the environment.

“We advocate a ban on glyphosate which should take effect in the short term with restrictions on purchasing, spraying and packaging,” Souza, who is also the head of the Centre for Studies on Appropriate Technologies in Argentina (CETAAR), told IPS.

Carlos Vicente, a leader of the international NGO GRAIN, told IPS that the herbicide first reached Latin America in the mid-1970s and that its use by U.S. biotech giant Monsanto spread massively in the Southern Cone countries.

“Its widespread use mainly involves transgenic crops, genetically modified to tolerate glyphosate, such as RR (Roundup Ready) soy, introduced in Argentina, Brazil, Paraguay, Uruguay and other countries,” said Vicente, a representative of GRAIN, which promotes the sustainable management and use of agricultural biodiversity.

There are 50 million hectares of transgenic soy in the region, and 600 million litres a year of the herbicide are used annually, he said.

According to Souza, there are 83 million hectares of transgenic crops in Argentina, Bolivia, Brazil, Paraguay and Uruguay alone.

The WHO report “is very important because it shows that despite the pressure from Monsanto, independent science at the service of the common good rather than corporate interests is possible,” Vicente said.

Monsanto sells glyphosate under the trade name Roundup. But it is also sold as Cosmoflux, Baundap, Glyphogan, Panzer, Potenza and Rango. And among small farmers in some countries, it is popularly referred to as “randal”.

It is used not only on transgenic crops but also on vegetables, tobacco, fruit trees and plantation forests of pine or eucalyptus, as well as in urban gardens and flowerbeds and along railways.

But in traditional agriculture it is used after the seeds germinate and before they are planted, while in transgenic crops it is used during planting, when it acts in a non-selective fashion, thus destroying a variety of plants and grass, according to RAP-AL. 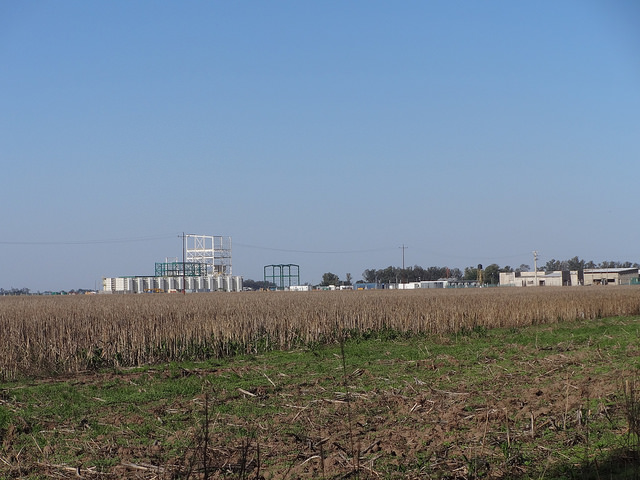 The people of the town of Malvinas Argentinas, in the central province of Córdoba, have blocked the construction of a Monsanto transgenic maize seed treatment plant since 2013, in their fight against the alleged toxic effects to human health and the environment. Credit: Fabiana Frayssinet/IPS

“This rain – literally – of glyphosate has a direct impact on ecosystems, communities, the soil and water – and these impacts cannot be hidden any longer,” Vicente said.

“We can no longer accept the use of these poisons because they destroy biodiversity, aggravate climate change, destroy the soil’s fertility, and contaminate the water and even the air,” said Joao Pedro Stédile, leader of Brazil’s Landless Workers’ Movement (MST). “And above all, they bring more illness, such as cancer,” he told IPS.

“Although the studies do not refer to human health or carcinogenesis, they have demonstrated in animals (amphibian embryos) that glyphosate is ‘teratogenic’ – in other words it causes malformations during the development of these vertebrates,” Lajmanovich, who is a member of the government’s National Scientific and Technical Research Council (CONICET), told IPS.

“In addition, we found that it has effects on the activity of very important enzyme systems (cholinesterases), which means it has a certain degree of neurotoxicity,” he added.

Epidemiological studies have found effects of glyphosate spraying in communities.

“The main effects that scientists and rural doctors have linked to the spraying are specifically respiratory diseases, allergies, miscarriages, an increase in children born with malformations, and a higher incidence of tumors,” said Lajmanovich.

Vicente, meanwhile, noted that applied research carried out in several Latin American countries point in the same direction as the WHO study. In Argentina, for example, studies in the provinces of Rosario and Córdoba “clearly demonstrate the rise in cases of cancer, which in some instances are three or four times the national average.”

In Colombia, agronomist Elsa Nivia, director of the Pesticide Action Network in that country, found that in the first two months of 2001 local authorities reported 4,289 people suffering from skin and gastric disorders, and 178,377 animals – including horses, cattle, pigs, dogs, ducks, hens and fish – killed as a result of exposure to the pesticide.

Cases of intoxication have also been reported in Brazil, Chile, Paraguay and Uruguay, according to RAP-AL.

Souza complained that in Latin America, glyphosate is sold without restrictions by animal feed and agrochemical suppliers, hardware stores and other businesses, often “in smaller quantities, in soft drink bottles.”

Stédile, who is also a member of the international small farmers movement Vía Campesina, hopes this region and Europe will ban its use in agriculture, as Mexico, Russia and the Netherlands have done.

As an alternative, he proposed “agroecological production that combines scientific know-how with the age-old knowledge of peasant farmers, to develop crops without the use of poisons, suited to each ecosystem.” That methodology has increased “the productivity of the soil and labour, better than practices that use poisons,” he said.

It is not, said Vicente, a question of replacing glyphosate with new weed killers, several of which are even more toxic, “but of switching to a model of agroecological smallholder agriculture aimed at achieving food sovereignty for our people.”

Stédile said governments in South America continue to support transgenic agriculture despite the evidence of damage to health and the environment, because they believe “agribusiness can help the economy by increasing exports of commodities, contributing to achieving a positive trade balance.”

“This exports illusion keeps governments from taking a stance against a veritable genocide,” he said.

Vicente called for concrete government measures that reflect the results of research carried out in this region, now that the WHO has issued conclusions backing it up.

In a statement, Monsanto criticised the IARC report as “junk science”, saying “this result was reached by selective ‘cherry picking’ of data and is a clear example of agenda-driven bias.” They demanded a rectification.

In response, the researchers pointed out that they stated that glyphosate was a “probable carcinogen”.

Monsanto said “This conclusion is inconsistent with the decades of ongoing comprehensive safety reviews by the leading regulatory authorities around the world that have concluded that all labeled uses of glyphosate are safe for human health.”

Lajmanovich argued that the position taken by a company “cannot prevail over that of an international institution of renowned prestige, the WHO, which is the guiding body in world health.”

He also noted that Monsanto considered WHO reports reliable “when they indicated that glyphosate was innocuous.”