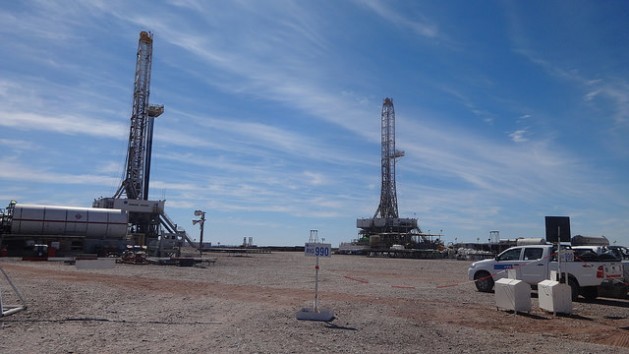 The Loma Campana camp where YPF and Chevron produce shale oil in the southwest Argentine province of Neuquén. So far, the plunging of oil prices has not modified the costely development of this unconventional fuel. Credit: Fabiana Frayssinet/IPS

BUENOS AIRES, Apr 10 2015 (IPS) - Despite the precipitous fall in global oil prices, Argentina has continued to follow its strategy of producing unconventional shale oil, although in the short term there could be problems attracting the foreign investment needed to exploit the Vaca Muerta shale deposit.

The uncertainty has come on the heels of the initial euphoria over the exploitation of shale oil and gas, of which Argentina has some of the world’s largest reserves.

Is the Vaca Muerta shale oil and gas field in intensive care, now that the price of a barrel of oil has plummeted from 110 dollars to under 50 in just seven months? That is the question repeated by financial and oil industry experts.

Argentina’s energy trade deficit climbed to almost seven billion dollars in 2014, partly due to the decline in the country’s conventional oil reserves.

Eliminating that deficit depends on the development of Vaca Muerta, a major shale oil and gas deposit in the Neuquén basin in southwest Argentina. At least 10 billion dollars a year in investment are needed over the next few years to tap into this source of energy.

“Conventional oil production has peaked, so to meet the rise in demand it will be necessary to develop unconventional sources. And Argentina is one of the best-placed countries to do so.” -- Víctor Bronstein

“In the short term, it would be best to import, rather than exploit the shale resources,” Víctor Bronstein, the director of the Centre of Studies on Energy, Policy and Society, told IPS.

“But taking a more strategic view, investment in and development of these resources must be kept up, since oil prices are going to start climbing again in the near future and we have to have the capacity to produce our own resources when that happens,” he added.

That is how President Cristina Fernández saw things, he said, when she set a domestic price of 72 dollars a barrel – “40 percent above its international value” – among other production incentives that were adopted to shore up Vaca Muerta.

The company admits that to exploit the deposit, it will need to partner with transnational corporations capable of providing capital. It has already done so with the U.S.-based Chevron in the Loma Campana deposit, where it had projected a price of 80 dollars a barrel this year.

“Who is going to invest in unconventional oil and gas at the current prices?” the vice president of the Grupo Moreno, Gustavo Calleja, commented to IPS.

“We have to hold on to Vaca Muerta and continue studying its deposits in just a few pilot wells, to see how deep they are and what kind of drilling is necessary to keep down costs and curb the environmental impacts,” said Calleja, who was the government’s undersecretary of fuel in the 1980s. 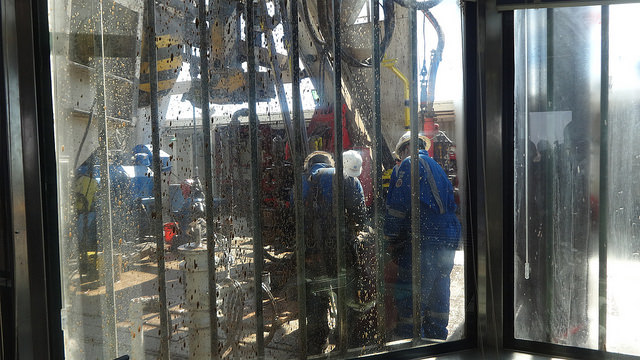 Hydraulic fracturing or “fracking”, the technique used to extract shale oil and gas, involves the high-pressure injection of a mix of water, sand and chemical additives into the parent-rock formations at a depth of over 2,000 metres, in order to release the trapped oil and gas which flows up to the surface through pipes.

Besides being very costly, fracking poses environmental risks, as it requires huge volumes of water, pollutes aquifers, and can cause earthquakes.

The shale boom that began in the United States in 2008 was driven, among other factors, by high oil prices, which provided a profit margin.

“At the current prices only those who have cutting-edge technology can develop their shale reserves,” said Calleja.

The cost of producing a barrel of shale oil is based on variables such as extraction, exploration, investment amortization and the payment of taxes and royalties. In the United States, the cost is calculated at between 40 and 70 dollars.

That fact, explained Bronstein, led to an over 30 percent reduction in drilling activity since prices fell, “which will bring down production over the next few months.”

In Argentina, shale development is just starting, which means costs are high “due to a question of scale and problems of logistics and infrastructure,” said the expert.

In the United States, “developing a shale well, including fracking, costs around three million dollars,” while in Argentina “it costs more than twice that,” he said.

“The cost of extracting conventional oil in Argentina ranges between 20 and 30 dollars a barrel, while it costs around 90 dollars to extract a barrel of shale oil, although that will gradually go down as Vaca Muerta is developed,” he said.

Argentina does not yet produce shale gas on a commercial scale, as it still has large reserves of conventional gas. YPF’s shale oil production represents 10 percent of the company’s total output, and between three and four percent of the oil extracted by all operating companies in the country.

Canada and China produce unconventional oil on a commercial scale. But due to their geologic and operative characteristics, the United States and Argentina are seen as having the greatest potential in terms of future production of shale oil and gas.

YPF argues that with the gradual reduction in production costs, a rise in output, and higher domestic oil prices, Vaca Muerta is still profitable.

The industry is waiting for the collapse in prices to bring down the costs of international inputs and services, thus reducing the high domestic industrial costs.

YPF has also signed agreements for the joint exploitation of shale deposits with Malaysia’s Petronas and Dow Chemical of the United States, while other transnational corporations have announced their intention to invest in Vaca Muerta.

Bronstein believes the investments will continue to flow in because they were planned with an eye to “significant production in five years.”

“This means investors don’t take the current price of crude oil into account as much as the future price. And virtually all analysts agree that oil prices will rally within a few years,” he said.

“Conventional oil production has peaked, so to meet the rise in demand it will be necessary to develop unconventional sources. And Argentina is one of the best-placed countries to do so,” Bronstein added.

Cristian Folgar, who was undersecretary of fuels last decade, said “any snapshot of the market today would be distorted because the costs of different oil industry services have not yet settled.”

“YPF will continue to forge ahead and will not slow down investments that depend on its decision because the company currently channels its entire flow of investment into Argentina,” he told IPS.

In his view, international corporations will reduce their investments at a global level, which means “YPF is not at all likely to reach new joint venture agreements with other oil companies until the situation stabilises.”

But “those who have already started to invest are not going to back out,” he added.

“Argentina continues to pay for crude and gas at the same prices as before the start of this downward price trend,” Folgar said. “Since a change of government lies just ahead, new developments will probably wait for the next government to send signals indicating what its plans are in the energy sector.”

Calleja is worried that Saudi Arabia, the world’s leading oil exporter, and the country that according to experts is pulling the strings of the current price collapse in order to – among other goals – push shale out of the market, “may drive prices even further down.”

In the face of what he describes as a global “war of interests”, he believes it is a good time to start looking to energy sources other than fossil fuels.

Calleja argues in favour of hydroelectricity and nuclear energy, which currently represent just 14 percent of Argentina’s energy mix, but have “lower economic and environmental costs.”