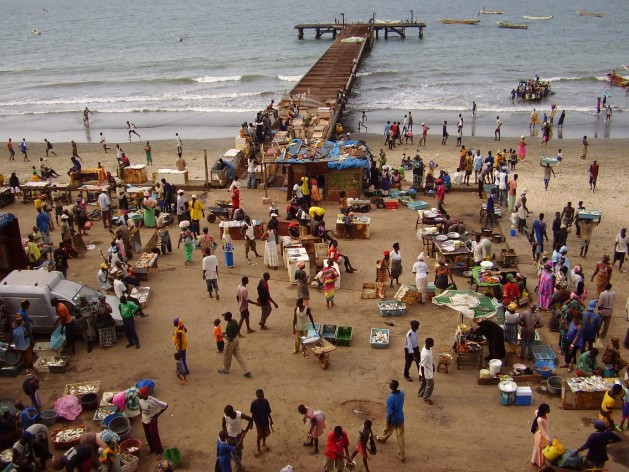 Bakau fish market, The Gambia. The plight of Gambian and other West African artisan fishers could soon see a change for the better following an historic ruling by the International Tribunal for the Law of the Sea. Photo credit: Ralfszn - Own work. Licensed under GFDL via Wikimedia Commons

BANJUL, The Gambia, Apr 18 2015 (IPS) - It was five in the afternoon and Buba Badjie, a boat captain, had just brought his catch to the shore. He had spent twelve hours at sea off Bakau, a major fish landing site in The Gambia.

Inside the trays strewn on the floor bed of his wooden boat were bonga and catfish. Scores of women crowded around, looking to buy his catch.

“This is just enough to cover my expenses,” he tells IPS, indicating the squirming silvery creatures. “I went up to 20-something kilometres and all we could get was bonga.

Badjie, 38, is not a native Gambian. Originally from neighbouring Senegal, he came here as a teenager looking for work. But the sea he has been fishing for almost two decades is no longer the same, he says somberly.

“This trade is about win and loss,” he added. “But nowadays, we have more losses. Recently, I went up to 50-something kilometres to another fishing ground but still no catch.

“The problem is the variations in the weather pattern. Also, we encounter huge commercial trawlers in the waters. Sometimes, they threaten to kill us when we confront them. When we spread our nets, they ruin them.”

But Badjie’s plight and that of thousands of other artisan fishers could soon see a change for the better.

In an historic ruling by the International Tribunal for the Law of the Sea – the first of its kind by the full tribunal – the body affirmed that “flag States” have a duty of due diligence to ensure that fishing vessels flying their flag comply with relevant laws and regulations concerning marine resources to enable the conservation and management of these resources.

Flag States, ruled the tribunal, must take necessary measures to ensure that these vessels are not engaged in illegal, unreported or unregulated (IUU) fishing activities in the waters of member countries of West Africa’s Sub-Regional Fisheries Commission (SFRC). Further, they can be held liable for breach of this duty. The ruling specifies that the European Union has the same duty as a state.

West African waters are believed to have the highest levels of IUU fishing in the world, representing up to 37 percent of the region’s catch.

“This is a very welcome ruling that could be a real game changer,” World Wildlife Fund International Marine Programme Director John Tanzer was reported as saying. “No longer will we have to try to combat illegal fishing and the ransacking of coastal fisheries globally on a boat by boat basis.”

The need for an advisory opinion by the Tribunal emerged in 1993 when the SRFC reported an “over-exploitation of fisheries resources; and illegal, unreported and unregulated fishing of an ever more alarming magnitude.” Such illegal catches were nearly equal to allowable ones, it said.

Further, “the lost income to national economies caused by IUU fishing in Wet Africa is on the order of 500 million dollars per year.”

The apparent theft of West Africa’s fish stocks has been denounced by various environmental groups including Greenpeace, which described “monster boats” trawling in African waters on a webpage titled ‘Fish Fairly’.

“For decades,” Greenpeace wrote, “the European Union and its member states have allowed their industrial fishing fleet to swell to an unsustainable size… In 2008, the European Commission estimated that parts of the E.U. fishing fleet were able to harvest fish much faster than stocks were able to regenerate.’’

“The problem of oversized fleets using destructive fishing methods is a global one and the results are alarming and indisputable.”

Unofficial sources told IPS that there are forty-seven industrial-sized fishing vessels currently in The Gambia’s waters, thirty-five of which are from foreign fleets.

Meanwhile, artisanal fishers, on whom the population depends for supply, say they are finding it hard to feed the market. Prices have risen phenomenally and shortages in the market are no longer a rarity.

Bojang learnt the fishing trade from his father when he was young, but later switched gears to become a police officer.

After 20 years, he retired and returned to fishing. Building his first fishing boat in 1978, he became the president of the first-ever association of fishers in the country.

“Fishing improved my livelihood,” he told IPS. “While I was in the service, I could not build a hut for myself. Now, I have built a compound. I’ve sent my children to school and all of them have graduated.

“I transferred my skills to them and they’ve joined me at sea. I have 25 children; 10 boys and 15 girls. All the boys are into fishing. Even the girls, some know how to do hook and line and to repair net.”

Other hopeful trends for the artisanal fishers include the recognition by the Africa Progress Panel, headed by former U.N. Secretary General Kofi Annan, that illegal fishing is a priority that the continent must address.

Another is the endorsement by the Food and Agricultural Organisation (FAO) of the United Nations of guidelines which seek to improve conditions for small-scale fishers.

Nicole Franz, fishery planning analyst at FAO’s Fisheries and Aquaculture department in Rome, told IPS that the small-scale fisheries guidelines provide a framework change in small-scale fisheries. “It is an instrument that looks not only into traditional fisheries rights, such as fisheries management and user rights, but it also takes more integrated approach,” she said.

“It also looks into social conditions, decent employment conditions, climate change, disaster risks issues and a whole range of issues which go beyond what traditional fisheries institutions work with. Only if we have a human rights approach to small-scale fisheries, can we allow the sector to develop sustainably.”