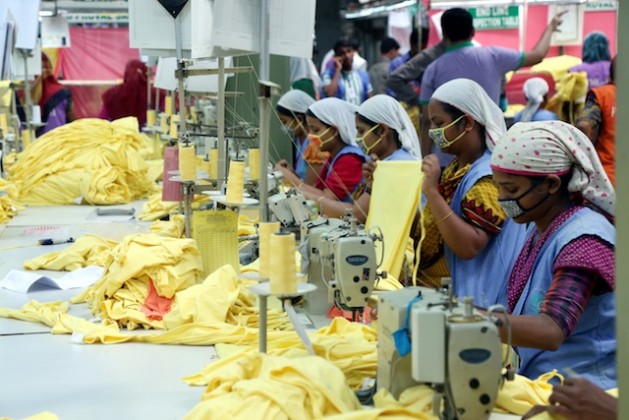 An international fund to assist the survivors of the Rana Plaza factory collapse reached its 30-million-dollar target on Jun. 9, 2015. Credit: Obaidul Arif/IPS

UNITED NATIONS, Jun 9 2015 (IPS) - Two years after a massive garments factory collapsed in a suburb of Bangladesh’s capital, Dhaka, killing over 1,100 people and leaving more than 2,500 injured, a major international fund has met its target of raising 30 million dollars to be paid out in compensation to the victims and their families.

Set up in 2013 under the aegis of the International Labour Organisation (ILO), the Rana Plaza Coordination Committee represents all stakeholders in the massive global apparel trade.

Its mission was to ensure fair and equitable compensation to those who survived, including making up lost income, providing funds for medical needs and assisting families who lost breadwinners on that fateful day.

In January 2014, the ILO created the Rana Plaza Donors Trust Fund to streamline the process of financing the Committee’s efforts.

On the second anniversary of the tragedy, in April this year, the Fund was still three million dollars short of its goal, and had paid out just 70 percent of the promised aid to some 2,800 claimants.

But a large injection of funds by an anonymous donor in the first week of June has enabled the fund to meet its target.

According to the Clean Clothes Campaign (CCC), an alliance of organisations in 16 European countries pushing for improved workers’ rights in the apparel and sportswear sectors, this represents a major milestone in an international movement to hold stakeholders accountable for the industrial disaster, considered one of the worst in modern history.

A spokesperson for the campaign, Ineke Zeldenrust, said in a statement on Jun. 8, “This day has been long in coming. Now that all the families impacted by this disaster will finally receive all the money that they are owed, they can finally focus on rebuilding their lives.”

The general consensus, however, is that this is only a first step.

In a statement released Tuesday, ILO Director-General Guy Ryder stressed, “This is a milestone but we still have important business to deal with. We must now work together to ensure that accidents can be prevented in the future.”

Rights groups also say that major international brands must do more to ensure workers’ safety, while local trade unions have been up in arms at the government’s inability – or unwillingness – to implement reforms in a sector that employs four million people and exports 24 billion dollars worth of merchandise every year. Despite its importance to the Bangladeshi economy, the government has done little to ensure labour standards and safety protocols within the sector. A Human Rights Watch report released in April found that workplace abuse is common, and documented countless cases of attacks, violence and intimidation of labour organisers.

Based on interviews with over 160 workers in 44 factories, predominantly manufacturing items for large retailers based in Australia, Europe and North America, the report detailed the extent of ‘union busting’ that goes on in the approximately 4,536 factories across Bangladesh.

Though the government recently raised the minimum wage to 68 dollars a month, up from 39 dollars at the time of the Rana Plaza accident, workers say they will hold out for a 100-dollar monthly salary, which is the bare minimum required to feed and clothe their families.

Safety standards, too, leave a lot to be desired, according to activists and workers, although the increase from 56 to 800 ILO-trained inspectors signals progress.

Meanwhile the Accord on Fire and Building Safety, tasked with overseeing safety protocols in 1,600 factors at the behest of retailers based primarily in Europe, has also given industry experts reason to celebrate, albeit cautiously.