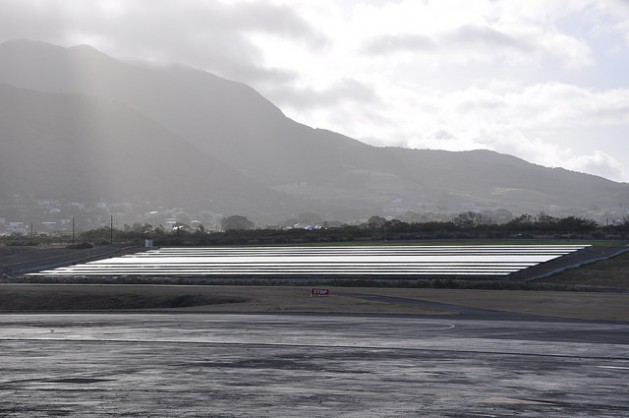 FORT-DE-FRANCE, Martinique, Jul 21 2015 (IPS) - A leading geothermal expert warns that the small island states in the Caribbean face “a ticking time bomb” due to the effects of global warming and suggests a shift away from fossil fuels to renewable energy is the only way to defuse it.

President of the Ocean Geothermal Energy Foundation Jim Shnell says to solve the problems of global warming and climate change, the world needs a new energy source to replace coal, oil and other carbon-based fuels.  OGEF’s mission is to fund the R&D needed to tap into the earth’s vast geothermal energy resources.

"You need to have a balance of your resources but it is quite possible to have that balance and still make it 100 percent renewable and do without fossil fuels altogether." -- Jim Shnell

“With global warming comes the melting of the icecaps in Greenland and Antarctica and the projection is that at the rate we are going, they will both melt by the end of this century,” Shnell told IPS, adding “if that happens the water levels in the ocean will rise by approximately 200 feet and there are some islands that will disappear altogether.

“So you’ve got a ticking bomb there and we’ve got to defuse that bomb and if I were to rate the issues for the Caribbean countries, I would put a heavyweight on that one.”

It has taken just eight inches of water for Jamaica to be affected by rising sea levels, with one of a set of cays called Pedro Cays disappearing in recent years.

In the Caribbean, scientists have also pointed to the likelihood of Barbuda disappearing in 40 years.

Shnell said countries could “essentially eliminate” the threat by turning to renewable energy, thereby decreasing the amount of fossil fuels or carbon-based fuels they burn.

“The primary driver of climate change is greenhouse gasses and one of the principal ones in terms of volume is carbon dioxide,” he said.

“For a long time a lot of electricity, 40 per cent of the electricity produced in many countries, would come from coal because it was a very inexpensive, plentiful form of carbon to burn.

“But now countries have seen that they need to move away from that and in fact the G7 just earlier this month got together and in their meeting, the leaders declared that they were going to be 100 percent renewable, that is completely stop burning carbon, coals and other forms of fossil fuels by the end of this century. The only problem is that for global warming purposes that’s probably too late,” Shnell added.

The Martinique Conference on Island Energy Transitions was organised by the International Renewable Energy Agency (IRENA) and the French Government, which will host the United Nations International Climate Change Conference, COP 21, at the Le Bourget site in Paris from Nov. 30 Dec. 11 2015.

Senior Energy Specialist at the World Bank Migara Jaywardena said the conference was useful and timely in bringing all the practitioners from different technical people, financial people and government together.

“There’s a lot of climate funds that are being deployed to support and promote clean energy…and we talked about the challenges that small islands, highly indebted countries have with mobilising some of this capital and making that connection to clean energy,” Jaywardena told IPS.

“They want to do it but there isn’t enough funds and remember there’s a lot of other competing development interests, not just energy but non-energy interests as well. Since this conference leads to the COP in Paris, I think being a part of that climate dialogue is important because it creates an opportunity to begin to access some of those funds.”

“As an example, for Dominica we have an allocation of 10 million dollars from the clean technology fund to support the geothermal and that’s a perfect example of where climate funds could be mobilised to support clean energy in the islands,” Jaywardena added.

Shnell said Caribbean economies are severely affected by the cost of fuel but that should be an incentive to redouble their efforts to get away from importing oil.

“The oil that you import and burn turns right around and contributes to global warming and the potential flooding of the islands, whereas you have some great potential resources there in terms of solar and wind and certainly geothermal,” he said.

“What we’re advocating is the mixture of those resources. We feel it would be a mistake to try to select one and make that your 100 percent source of power or energy but it’s the mix, because of different characteristics of each of them and different timing of availability and so forth, they work much better together.”

He noted that wind and solar are intermittent while utility companies have to provide power all the time.

“So you need something like geothermal or hydropower that works all the time and provides enough energy to keep the grid running even when there is no solar energy. So you need to have a balance of your resources but it is quite possible to have that balance and still make it 100 percent renewable and do without fossil fuels altogether,” Shnell said.

A legislator in St. Kitts and Nevis said the twin island federation has gone past fossil fuel generation and is now adopting solar energy with one plant on St. Kitts generating just below 1 megawatt of electricity and another being developed which would produce 5 megawatts.

“In terms of solar we’ll be near production of 1.5 megawatts of renewable energy. As a government we are going full speed ahead in relation to ensuring that there’s renewable energy, of course, where the objective is to reduce electricity costs in St. Kitts and Nevis,” Energy Minister Ian Liburd told IPS.

In late 2013 legislators in Nevis selected Nevis Renewable Energy International (NREI) to develop a geothermal energy project, which they said would eventually eliminate the need for existing diesel-fired electrical generation by replacing it with renewable energy.