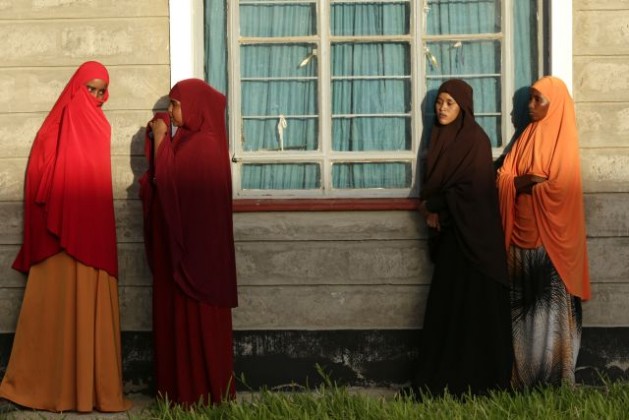 A group of young Somali girls at the Ifo 2 Refugee Camp in Dadaab, Kenya, which is supported by the United Nations High Commissioner for Refugees (UNHCR). Credit: UN Photo/Evan Schneider

UNITED NATIONS, Jul 8 2015 (IPS) - On the eve of World Population Day, the United Nations is fighting a virtually losing battle against growing humanitarian emergencies triggered mostly by military conflicts that are displacing people by the millions – and rendering them either homeless or reducing them to the status of refugees.

The number of forcibly displaced people has risen to a record number – almost 60 million at the end of 2014, according to the latest U.N. figures.

“Governments and electorates are increasingly loath to accept large numbers of people who are in great need, ethnically different and may pose threats to social stability.” -- Joseph Chamie

But that number will continue to rise through 2015 – judging by the unprecedented number of refugees fleeing their home countries, and mostly crossing the Mediterranean Sea, seeking safe havens in European countries.

“Among these, most women and adolescent girls face particular threats as a result of the absence of health and other essential services that they need,” says U.N. Under-Secretary-General Dr. Babatunde Osotimehin, executive director of the U.N. Population Fund (UNFPA).

“The complex emergencies we are responding to include protracted conflicts, made worse by poor or failed governance, the consequences of climate change, and the engagement of extremist groups claiming territory, resources and power,” he points out.

The theme of this year’s World Population Day – “Vulnerable Populations in Emergencies” – is aimed at highlighting the special needs of women and adolescent girls during conflicts and humanitarian disasters.

According to the United Nations, the number of people requiring critical relief has more than doubled since 2004, to over 100 million today, over and above the 60 million displaced people.

Joseph Chamie, former director of the United Nations Population Division, told IPS the focus of the 2015 World Population Day, which will be commemorated on July 11, is both timely and appropriate given that a record number of more than 60 million men, women and children have been displaced from their homes.

Although the current number of people displaced is at a record high, it will likely increase to substantially higher levels in the coming years as the political unrest and civil conflicts remain unresolved and become more widespread, he noted.

“The forced displacement of millions of men, women and children has created a humanitarian crisis that is challenging countries in every region of the world.”

Chamie said the many services needed by the vulnerable people, including food, shelter, clothing, health care, schooling and safety, are overwhelming the capacities of governments and non-governmental organisations (NGOs).

Unfortunately, the international community has not been able to agree on a comprehensive solution to the crisis, he pointed out.

“Governments and electorates are increasingly loath to accept large numbers of people who are in great need, ethnically different and may pose threats to social stability.”

According to a report by the U.N. Refugee Agency (UNHCR) released last week, the large majority of the 137,000 people who crossed the Mediterranean Sea into Europe during the first half of this year were fleeing from war, conflict or persecution, making the Mediterranean crisis primarily a refugee one.

The report said one third of people arriving in Italy or Greece were from Syria, whose nationals are almost universally deemed to qualify for refugee status or other forms of protection.

The second and third most common countries of origin are Afghanistan and Eritrea, whose nationals are also mostly considered to qualify for refugee status.

There was an 83 per cent increase in refugees and migrants crossing the Mediterranean from January to June — 137,000 compared to 75,000 in the same period last year, according to UNHCR.

The number of deaths at sea rose to record levels in April of this year, when more than 1,300 people drowned or went missing in a single month, compared to 42 last April.

In a statement released here, UNFPA said women and adolescent girls who are caught up in humanitarian emergencies also face much greater risk of abuse, sexual exploitation, violence and forced marriage during conflicts and natural disasters.

In addition, many women who survive a crisis become heads of household, with the sole responsibility of caring for their children.

They often have to overcome immense obstacles to provide health and care for children, the sick, the injured and the elderly, and bear the heaviest burden of relief and reconstruction. As a result, they may neglect their own needs as they care for others, UNFPA said.

One of the priorities of UNFPA is to empower and safeguard the well-being of women, adolescent girls, and young people and address their specific needs and concerns.

“We work closely with governments, the United Nations system, local partners and others on disaster preparedness to ensure that reproductive health is integrated into emergency responses.”

“On this World Population Day, we call on the international community to redouble efforts to protect the health and rights of women and girls”, the agency said.