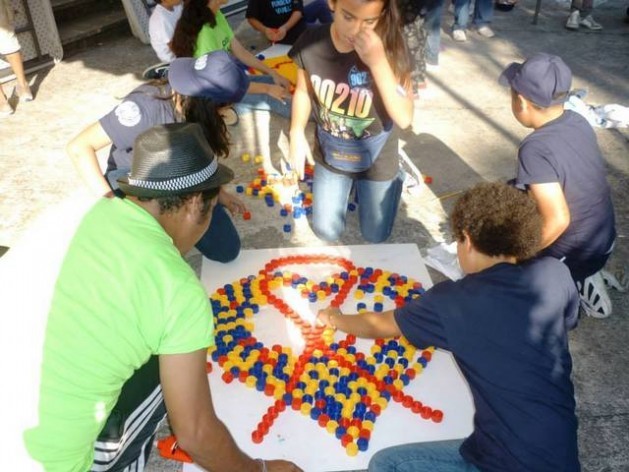 A group of children use bottle caps to create the red ribbon that symbolises the fight against AIDS, in one of the awareness-raising activities carried out in Latin America. Credit: UNAIDS Latin America

MONTEVIDEO , Jul 14 2015 (IPS) - The countries of Latin America have partially met the Millennium Development Goal referring to the fight against HIV/AIDS, according to the UNAIDS report on the global epidemic released Tuesday.

“The world has achieved the AIDS targets of Millennium Development Goal 6. The epidemic has been halted and reversed,” U.N. Secretary General Ban Ki-moon wrote in the preface to the report “How AIDS changed everything —“MDG6: 15 years, 15 lessons of hope from the AIDS response”.

Among the advances mentioned by the UNAIDS (Joint United Nations Programme on HIV/AIDS) report was the fact that 47 percent of people over 15 and 54 percent of children under 14 living with HIV/AIDS in Latin America were receiving antiretroviral treatment in 2014 – one of the highest levels of coverage in the world.

In some Latin American countries coverage is higher, such as Argentina, Brazil, Colombia, Mexico and Venezuela, the five countries that account for over 75 percent of cases of HIV/AIDS in the region. But in others it is much lower, like Bolivia, where antiretroviral coverage stands at less than 25 percent.

As an example to be followed, the report cites a major regional accomplishment: on Jun. 30 Cuba became the first country in the world to receive validation from the World Health Organisation (WHO) that it had eliminated mother-to-child transmission of HIV/AIDS.

Chile, Costa Rica and Uruguay are set to become the next countries in the region to receive validation, possibly before June 2016, the regional director of UNAIDS for Latin America, César Núñez, said in an interview with IPS from Panama City.

The three pillars of the struggle

The experts, activists and HIV-positive persons consulted by IPS agreed that any effective struggle against the epidemic must be based on three pillars: prevention through early detection and treatment of HIV/AIDS, universal access to antiretroviral therapy, and the reduction of HIV-related stigma and discrimination, which limits access to detection and treatment.

According to UNAIDS, an estimated 70 percent of cases of HIV/AIDS in Latin America have been diagnosed and 47 percent of the patients have begun antiretroviral therapy. Of those in treatment, the virus has been suppressed among 66 percent – in other words, 28 percent of all HIV-positive people in the region.

HIV prevalence in the region stands at 0.4 percent of the population – compared to 0.8 percent globally. But it rises to 25 or 30 percent among trans women involved in sex work, over 10 percent among gays and other men who have sex with men, and six percent among female sex workers. 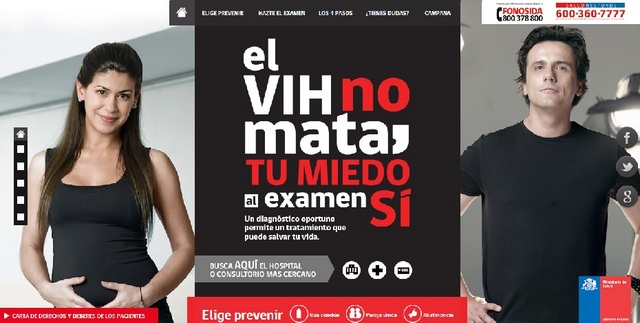 HIV/AIDS prevention campaigns are continually carried out in Latin America, such as this one launched by Chile’s Health Ministry, which shows a man and a woman who do not fit the stereotypes of HIV-positive persons, and warns that “HIV doesn’t kill; your fear of the test does.” Credit: Chilean government

Between January 2013 and March 2014 the Inter-American Court of Human Rights received 770 reports of violence (594 murders and 176 serious assaults) motivated by the victim’s sexual orientation or identity or gender expression.

In Latin America the epidemic is concentrated in certain population groups, as well as in cities and ports, and along trade routes.

In 2014 there were 1.7 million people living with HIV/AIDS in Latin America, including 33,000 children. Of that total, 65 percent, or 1.1 million people, were men. The main route of transmission is sexual contact.

Over 75 percent of the 87,000 new HIV infections in the region in 2014 occurred, in descending order, in Brazil (which accounted for approximately 50 percent of the total), Mexico, Colombia, Venezuela and Argentina.

Fewer than 2000 children acquired HIV in 2014 in Latin America. High coverage of prevention of mother-to-child transmission has helped drive reductions in new infections among children, with 79 percent of the region’s 20,000 pregnant women living with HIV receiving antiretroviral therapy in 2014.

The Court recommended that states document such cases in order to develop policies for protecting the human rights of the lesbian, gay, bisexual, trans and intersexual (LGBTI) population.

“Laws on gender identity, gay marriage, anti-discrimination…are clear examples of legislation that…contribute to reducing discrimination and make it possible for the most affected populations to have access to health systems,” Carlos Falistocco, president of the Horizontal Technical Cooperation Group in Latin America and the Caribbean, which brings together the heads of AIDS programmes in the region, told IPS.

Núñez acknowledged that the region “managed to curb the spread of HIV, but we fell short of reversing the epidemic,” one of the targets of the sixth MDG, which like the other seven are to be met this year, when they will be replaced by the Sustainable Development Goals (SDGs).

There is still a long way to go, as reflected by the number of new HIV infections. Although they were reduced 13 percent from 2000 to 2014, in the last five years there has been little change in the annual number of new cases in the region.

Núñez said “there has been a kind of relaxation in the response. In some cases I think there’s a perception that this isn’t a problem anymore in Latin America, which has not enabled us to channel additional resources or put a higher priority on diagnosing and treating HIV.”

María José Fraga, a representative of the Network of Persons Living with HIV/AIDS in Uruguay, concurs.

“Because HIV has become a chronic disease, like diabetes or hypertension, social concern has died down,” she told IPS. “Today the epidemic is practically not discussed, because it’s not present. And for that reason we keep running into late diagnoses. There is no individual awareness of taking the test, or going to the doctor and asking for it.”

Fraga, 44, has been living with HIV for 24 years. When she was diagnosed in 1990, “there was practically no treatment,” she recalled.

“But that changed astoundingly fast, because by 1995 or 1996 there was already a wide variety of drugs…Back then they waited longer to start treatment. And the guidelines for treatment have gradually changed as more is understood about the disease and how it evolves in people,” she said.

Juan José Meré, a U.N. population fund (UNFPA) HIV/AIDS adviser, told IPS that in the case of Uruguay, “in nearly 40 percent of cases, full-blown AIDS is present by the time they are diagnosed. This can obviously be reverted, and in general it is, but at a high cost to their health.”

According to UNAIDS, in at least half of the countries in the region, 38 percent of people living with HIV had, when they were first tested, full-blown AIDS, which is defined by a CD4 cell count of less than 200 per cubic mm of blood. (CD4 cells are a type of lymphocyte or white blood cell; they are an important part of the immune system.)

WHO and UNAIDS recommend that antiretroviral treatment start when a person’s CD4 cell count falls to 500, when they are still asymptomatic.

“Some countries, like Brazil and Argentina, offer treatment to any diagnosed patient, regardless of the CD4 level,” said Falistocco.

What direction should Latin America take in the future?

“We must base whatever we do on that great message from Secretary General Ban…we can’t leave anyone behind. In the region we can make great progress, especially if we guarantee access to services for the sexual diversity community across the entire continent,” said Núñez.