VIENNA, Aug 27 2015 (IPS) - The OPEC Fund for International Development (OFID) has agreed to give the United Nations Industrial Development Organization (UNIDO) a grant in support of a project aimed at improving the productivity and competitiveness of the shrimp value chain in the Latin America and Caribbean (LAC) region.

OFID is the development finance institution established by the member states of the Organisation of Petroleum Exporting Countries (OPEC) in 1976 as a collective channel of aid to the developing countries.

The grant, which amounts to 300,000 dollars, aims at co-financing a project worth close to 900,000 dollars. OFID Director-General, Suleiman J. Al-Herbish and UNIDO Director General Li Yong, signed the agreement in Austria’s capital, where the two organisations are based. 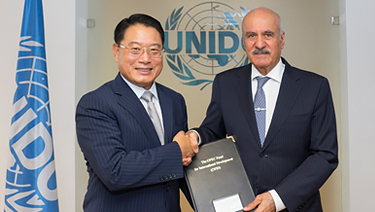 Al-Herbish said that the project “will support the sustainable development of the fisheries sector in the LAC region through the promotion of more resource efficient, environment friendly and socially equitable fish farming and processing practices.”

It will also contribute to poverty reduction efforts through the creation of direct and indirect employment and income generation opportunities, as well as improved food and nutrition security, he added.

UNIDO Director General Li pointed out that the shrimp farming sector represented an important source of income in countries such as Colombia, Cuba, Dominican Republic, Ecuador, Mexico and Nicaragua.

“However, in most of these countries there is a need to enhance the productivity and competitiveness of the sector and its compliance with international quality and environmental standards.”

Aquaculture, especially shrimp farming, has been a vital source of economic growth in developing countries. Shrimp farming represents 15 percent of the total value of the fishery products internationally traded in 2011. Ecuador and Mexico are currently among the largest producers in the sector at regional level.

The agreement was signed on Aug. 25, within four weeks of OFID and the Inter-American Development Bank (IDB) signing a co-financing agreement to jointly promote development and economic growth in the LAC region through the expansion of trade financing to banks in the region.

According to the agreement, OFID and IDB will build on the existing Trade Finance Facilitation Programme (TFFP) to provide lines of credit to commercial banks in the LAC region to broaden the sources of trade finance available for LAC importing and exporting companies and support their internationalisation.

In support of global and intraregional integration through trade, this agreement will further strengthen OFID’s long-standing partnership with the IDB and widen OFID’s presence in the trade finance market in the LAC region, OFID said in a press release.

OFID works in cooperation with developing country partners and the international donor community to stimulate economic growth and alleviate poverty in all disadvantaged regions of the world.

It does this by providing financing to build essential infrastructure, strengthen social services delivery and promote productivity, competitiveness and trade.

According to OFID, its work is “people-centred, focusing on projects that meet basic needs – such as food, energy, clean water and sanitation, healthcare and education – with the aim of encouraging self-reliance and inspiring hope for the future.”