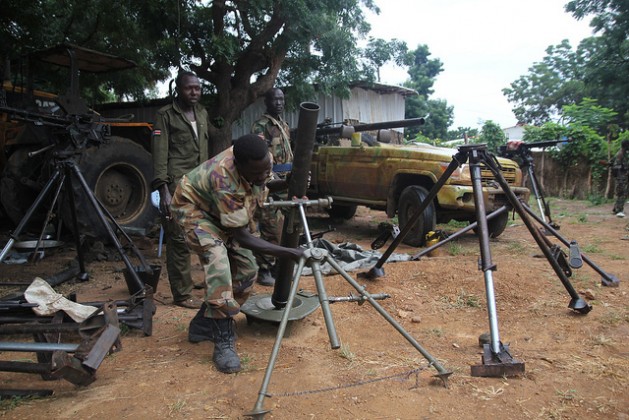 Described as the first international, legally binding agreement to regulate the trade in conventional arms, the ATT was also aimed at preventing the illicit trade in weapons.

“Arms transfers are still continuing – transfers that states know will contribute to death, injury, rape, displacement, and other forms of violence against human beings and our shared environment." -- Ray Acheson, Director, Reaching Critical Will, Women's International League for Peace and Freedom (WILPF)
But the first Conference of States Parties (CSP1) to the ATT, held in Cancun, Mexico last week, was the first meeting to assess the political credibility of the treaty, which came into force in December 2014.

Ray Acheson, Director, Reaching Critical Will, Women’s International League for Peace and Freedom (WILPF), told IPS the failure of CSP1 to adopt robust, comprehensive reporting templates that meet the needs of effective Treaty implementation is disappointing and must be corrected at CSP2, which is to be held in Geneva in 2016.

She said the working group process leading up to CSP2 must be more transparent and inclusive with regards to civil society participation than the process that lead to the provisional reporting templates.

“CSP1 is over, but implementation of the Treaty is just beginning,” she said.

“Arms transfers are still continuing – transfers that states know will contribute to death, injury, rape, displacement, and other forms of violence against human beings and our shared environment,” said Acheson who participated in the Cancun meeting.

Dr. Natalie J. Goldring, a senior fellow with the Security Studies Program in the Edmund A. Walsh School of Foreign Service at Georgetown University, who also attended the Cancun conference, told IPS that CSP1 was intended to provide the administrative backbone for the implementation of the ATT.

States Parties (the countries that have completed the ratification or accession process) largely succeeded in this effort, she said.

The Conference agreed on the basic structures for the new Secretariat to implement the Arms Trade Treaty, but that’s simply a first step.

She said full implementation of the Arms Trade Treaty requires action at the national, regional, and global levels.

One indication of countries’ commitment to the ATT will be the extent to which the countries with substantive and budgetary resources help the countries that lack those capacities, said Goldring, who also represents the Acronym Institute at the United Nations on conventional weapons and arms trade issues.

Some of the world’s key arms suppliers are either non-signatories, or have signed but not ratified the treaty. The ATT has been signed by 130 states and ratified by 72.

The United States, Ukraine and Israel have signed but not ratified while China and Russia abstained on the General Assembly vote on the treaty – and neither has signed it.

The major arms suppliers to sign and ratify the treaty include France, Germany, Britain, Italy and Spain.

The conflict in South Sudan has been triggered by a power struggle between President Salva Kiir and his former deputy Riek Machar: a conflict “which has been fueled with arms from many exporters,” according to the Monitor.

China told the Cancun meeting it would never export weapons that do not relate to its three self-declared principles: that arms transfers must relate to self-defence; must not undermine security; and must not interfere with internal affairs of recipients.

Acheson said the ATT can and must be used as a tool to illuminate, stigmatise, and hopefully prevent arms transfers that are responsible for death and destruction.

By the end of the Conference, she said, States Parties had taken decisions on all of the issues before it, including the location and head of the secretariat; management committee and budget issues; reporting templates; a programme of work for the inter-sessional period; and the bureau for CSP2.

The CSP1 voted for Geneva as home of the treaty’s permanent Secretariat – against two competing cities, namely Vienna, Austria; and Port of Spain, Trinidad and Tobago – while Dumisani Dladla was selected to head the Secretariat.

Acheson said while most of these items are infrastructural and procedural, they do have implications for how effectively the Treaty might be implemented moving forward.

On the question of transparency, unfortunately, states parties failed to meet real life needs, she added.

States parties also did not adopt the reporting templates that have been under development for the past year. But this is a relief, she added.

States that want to improve transparency around the international arms trade, and most civil society groups, are very concerned that the provisional templates are woefully inadequate and too closely tied to the voluntary and incomprehensive reporting practices of the U.N. Register on Conventional Arms.

“As we conduct inter-sessional work and turn our focus to implementation, we must all act upon the ATT not as a stand-alone instrument but as a piece of a much bigger whole,” she noted.

ATT implementation must be firmly situated in wider considerations of conflict prevention, resolution, and peacebuilding.

Acheson also said the ATT could be useful for confronting and minimising the challenges associated with transparency and accountability.

“It could help prevent atrocities, protect human rights and dignity, reduce suffering, and save lives. But to do so effectively, states parties need to implement it with these goals in mind.”

Commenting on the prepared statements at the high level segment of the conference, Goldring told IPS the United Nations and its subsidiary bodies could save a great deal of time if countries submitted their opening statements electronically in advance of the relevant meetings instead of presenting them orally in plenary sessions.

States Parties were not successful in developing agreed procedures for countries to comply with the mandatory reporting requirements of the ATT.

The group was only able to agree on provisional reporting templates, deferring formal adoption to the second Conference of States parties. This is an extremely important omission.

Goldring said countries reporting on the weapons that were imported or exported or transited their territory is a critical transparency task.

She said reporting needs to be comprehensive and public, and the data need to be comparable from country to country and over time.

“The current templates do not meet these tests,” she said pointing out that another important task will be trying to convince leading suppliers and recipients to join the treaty.

In a pleasant contrast to many U.N. meetings, NGOs were included in both the formal plenary and informal working group sessions.

The Rules of Procedure focus on consensus, but provide sensible options if it’s impossible to achieve consensus. This is a welcome development, as it will make it much more difficult for a small number of countries to block progress, she said.

“But in the end, the most important measure of success will be whether the ATT helps reduce the human cost of armed violence. It’s simply too early to tell whether this will be the case,” Goldring declared.