KAMPALA, Uganda, Oct 23 2015 (IPS) - Sixty-five years after a major international summit here on malaria, the mosquito-borne disease remains a scourge and its incidence may even be rising in parts of sub-Saharan Africa due to the combined effects of climate change, agricultural practices and population displacement.

Almost half the world’s population is deemed at risk of malaria, and an estimated 214 million people will contract it in 2015, with nearly half a million dying. 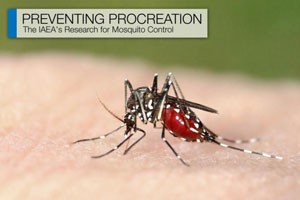 “Malaria is the number one public health problem in our country,” says Babria Babiler El-Sayed, director of Sudan’s Tropical Medicine Research Institute. Sudan has begun, with the assistance of FAO and the IAEA, to release sterilized male mosquitoes into the air in hopes that they crowd out their virile brethren and lead to reduced mosquito populations.

The Unite d Nations Food and Agriculture Organization (FAO) and the International Atomic Energy Association (IAEA) have used this “nuclear” technique with success against the lethal tsetse fly and the produce-destroying fruit fly. Malaria is a new area, and the two agencies are experimenting across East Africa with this so-called Sterile Insect Technique (SIT) of pest control.

And yet malaria is demonstrably preventable – and that is why it is explicitly named in Sustainable Development Goal No. 3 as something to be ended by 2030.

The key is not to rely on one method or tool but to develop integrated efforts to subdue the disease, notes El-Sayed.

That fits FAO’s broader approach. While working with the IAEA on the logistics and technology of SIT, field officers emphasize the need to integrate agricultural practices ranging from crop selection, tilling technique, water use and even rural home locations.

It’s a shift from 1950, when a World Health Organization conference held in Kampala resolved to support the intensive use of Dichlorodiphenyltrichloroethane (DDT) to eradicate the disease. As was learned the hard way, even such a potent chemical cannot on its own sustainably solve the problem. Indeed, in the emblematic case of the Tennessee Valley in the United States, it was a mass anti-poverty campaign coupled with a huge hydroelectric public-works program that led to the rapid demise of malaria without the use of chemicals in the 1930s.

Particularly alarming is malaria’s literal ascent into the densely-populated highlands of east Africa. Inhabitants of southwest Uganda and parts of Zambia and Rwanda typically lack the genetic resistance to malaria developed by farmers in mosquito-prone areas.

Climate change wreaks all sorts of changes in the risk profile of the human environment. For example, more and more Zambians are killed by crocodiles, lions and buffalos as they travel further for water in times of drought. Less headline-grabbing, but more pervasive, is the way one poor harvest can wipe out livelihoods, driving people to sell their livestock, tools and even land in a bid to survive and ending up mired in poverty. Similarly, pressure on the land – sometimes linked to civil conflict – is driving record flows of migrants, the majority of whom don’t leave their countries, but move into new ecosystems, as scores of Ugandans are doing by moving to the hilly southwest regions of this country and ultimately taking up a form of farming that enhances the risk of malaria.

Add to this the steady climb in average temperatures, which increase the potential habitat for the main malarial vectors and are “related to altitude rather than latitude,” according to recent research done by the International Food Policy Research Institute into why the incidence of malaria has risen so dramatically in Uganda’s upcountry. That spells special risks for elevations above 2,000 meters in Kenya, Ethiopia and Burundi, too.

Strategies must be integrated and local

Despite popular images today, malaria is not particularly a tropical disease. Indeed, it was the successful use of DDT in postwar Italy that galvanized the Kampala conference, even though it now appears the rising incomes linked to Marshall Plan-funded economic growth was the determining factor.

Integrated methods – farming techniques, crops themselves, and human practices such as the use of nets – are all part of any success story in malaria. Zambia’s Malaria Institute at Macha has, with international support, practically eliminated malaria in its southern district, and the credit should go primarily to an engaged community effort, according to Dr. Phil Thuma, one of the institute’s mainstays and an advocate of what he calls “full court press” tactics in battling the epidemic.

FAO has long been involved in distributing mosquito nets, one of the simple but critical tools in any effort. Indeed, one current FAO project promotes the use of insecticide-treated nets around livestock barns in Kenya and has led to a sharp uptick in dairy production as both humans and animals are healthier.

The media has long indulged in donor-depressing tales about Zambian fishermen using anti-mosquito nets to boost their catch or – in one quirky story from Uganda but published in Botswana – p eople using the nets to make bridal dresses. But in fact most people in eastern Africa have and use their government-provided nets today, and many buy another one in a sign of conviction about their utility, according to a detailed survey of actual behaviour in Tanzania.

The real problem is that many farmers have to get up before dawn, or stay out in their fields late, and as a result their work forces them to forgo protection during the biting hours.

Almost everybody knows the basics about malaria, but few had heard about climate change. Intriguingly, those with secondary or higher education tended to worry about unpredictable rain patterns while those with only primary education are focused on rising temperatures.

Empirical surveys clearly show that where cultivation practices reduce vegetation cover, temperatures rise in mosquito breeding sites. That means land use and reforestation efforts need to be part of the community-driven policy mix. Farmer field schools, a longtime FAO priority focus, are key to spreading knowledge that is locally useful, such as casting shade on breeding places or fostering fish in ponds.

Developing “malaria-smart” programs need to be drawn up with that in mind, especially given efforts to increase irrigation infrastructures to boost agricultural yields in sub-Saharan Africa. One survey in Ethiopia found that the rate of childhood malaria was seven times higher in villages within three kilometres of a microdam for irrigation than children living more than eight kilometres away.

Maize cultivation, a huge force in the region, may also be lifting the incidence of malaria because the higher-yield hybrid varieties used pollinate later in the year, helping fatten up mosquito larvae – meaning more, bigger and longer-living adult ones.