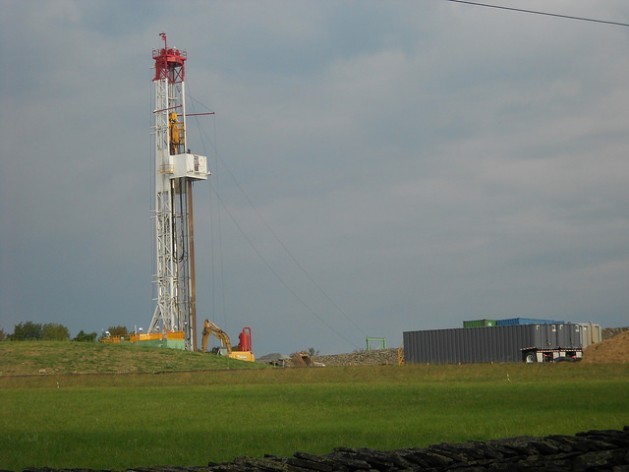 Experts predict that in the long term, shale gas production will not be sustainable in the United States. The photo shows a shale gas well in Montrose, in the U.S. state of Pennsylvania. Credit: Emilio Godoy/IPS

WASHINGTON, Oct 7 2015 (IPS) - The emergence of fracking has modified the global market for fossil fuels. But the plunge in oil prices has diluted the effect, in a struggle that experts in the United States believe conventional producers could win in the next decade.

The U.S. oil industry had peaked – when the discovery of new deposits and output from existing wells begins to fall – which made the country more dependent on imports. But the equation was turned around thanks to the new technique.

“The bubble won’t explode, but it will progressively deflate. At current prices, we would see a relatively quick shrinking of capital availability for the shale sector, because those companies are producing at a loss.” -- David Livingston

The innovative technology of hydraulic fracturing or fracking and the discovery of large deposits of shale gas and oil, along with massive investment flows, led to predictions that the United States would become autonomous in fossil fuels this decade. But these forecasts have been undermined by the drop in prices.

“The world is entering a new era of uncertainty in the geoeconomics of oil,” said David Livingston, an associate in the Energy and Climate Programme of the U.S. Carnegie Endowment for International Peace. “It is far from certain that the notoriously volatile oil market will become less cyclical.”

The analyst told IPS that as a result of domestic U.S. demand, “Companies will lose spare capacity, between what they can produce and what they produce, which is important, because the market is determined by that capacity.”

After 2003 international oil prices climbed, to 140 dollars a barrel in 2008, when the global financial crisis brought them down.

That means U.S. producers, in particular shale gas producers, are facing extremely low prices, overproduction, a lack of infrastructure for storing the surplus and a credit crunch for the industry’s projects, even though prices have gone down.

In addition, China’s economic slowdown and Europe’s stagnation are hindering the recovery in demand for energy.

The development of shale oil and gas has also put the U.S. industry on a collision course with the members of the Organisation of the Petroleum Exporting Countries (OPEC), especially since one of its widely touted objectives is to reduce imports from that bloc. 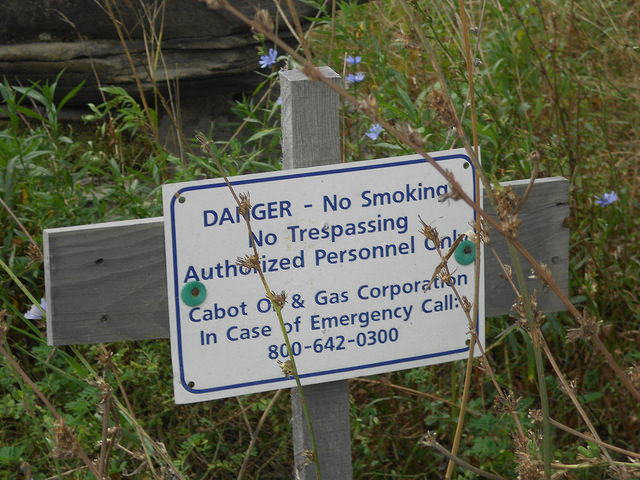 A warning about the danger of methane emissions in one of the shale gas Wells in Dimock, Pennsylvania. Credit: Emilio Godoy/IPS

Since November 2014, OPEC has kept its production quotas stable, as part of a strategy imposed by the bloc’s biggest producer, Saudi Arabia, aimed at keeping prices low and discouraging the development of shale deposits, which are much more costly to tap into than the organisation’s conventional reserves.

In late 2014, the Norwegian consultancy Rystad Energy put the cost of producing a barrel of shale oil in the United States at 65 dollars a barrel, which means the industry is operating at a loss. The average cost of extracting a barrel of conventional oil in that country is 13 dollars, compared to five dollars in the Gulf.

For Miriam Grunstein, a professor at the Centre for Economic Research and Teaching (CIDE) in Mexico, the outlook is very uncertain.

Fracking involves the massive pumping of water, chemicals and sand at high pressure into the well, a technique that opens and extends fractures in the shale rock deep below the surface, to release the natural gas. Environmentalists warn that the chemical additives are harmful to health and the environment.

The process generates large amounts of waste liquids containing dissolved chemicals and other pollutants that require treatment before disposal, as well as emissions of methane, a potent greenhouse gas.

This has led to widespread public opposition to fracking in U.S. communities where exploration for shale gas is going on.

“There are doubts for several reasons. First of all, due to the low prices,” she told IPS from Mexico, which has begun to explore its significant reserves of shale gas.

“Although it has forced many companies to improve their operating capacity, reduce investments and achieve greater efficiency, they are in an environment where they have to look for markets, in Europe or Asia. But that requires liquefaction infrastructure, which implies major investments,” she added, referring to the current situation faced by shale gas producers.

In June, the United States produced 9.3 million barrels per day of crude oil, about half of which was shale oil, according to data from the Energy Information Administration (EIA).

The prospects for the industry are beginning to look less promising. In its Drilling Productivity Report published in late August, the EIA projected a fall in shale gas production in September, for the first time this year, to 44.9 billion cubic feet per day.

The agency stressed that output from new wells is not enough to offset the decline in existing wells.

For Livingston, “OPEC as an institution – and Saudi Arabia, its leader – is likely to emerge from this paradigm shift stronger than before in many ways. With its new strategy – one born out of necessity – the kingdom is emphasising market share, rather than price, while also moving to delegate the burden of balancing the world oil market to the U.S. shale industry.”

The United States would become the new “swing producer”, although without achieving the same power as the Gulf producers in influencing the market.

But the average price will go up. This year, the Henry Hub reference price for U.S. natural gas has stood at 2.93 dollars per million British thermal units (Btu), the heat required to raise the temperature of one pound of water.

“The bubble won’t explode, but it will progressively deflate. At current prices, we would see a relatively quick shrinking of capital availability for the shale sector, because those companies are producing at a loss,” said Livingston.

Grunstein said: “Saudi Arabia’s aim is to keep the United States from becoming a major exporter. The strong markets exert the most pressure. If demand does not recover, the demand-price ratio is awkward. Consumption is needed, and I don’t see where it would come from.”

Livingston said one option is to review the 1970s-era ban on exporting U.S. crude oil, because “If production rises, refineries can’t process it and therefore new markets are needed.”