Mexico to Export Nixtamalisation of Grains to Africa 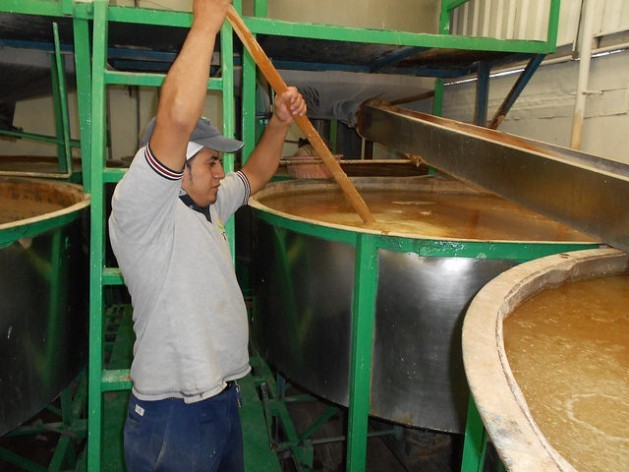 The corn is cooked with limewater to eliminate aflatoxins that cause liver and cervical cancer. Here a worker at the Grulin company is stirring the corn before it is washed, drained and ground, in San Luís Huexotla, Mexico. Credit: Emilio Godoy/IPS

TEXCOCO, Mexico , Dec 18 2015 (IPS) - Every day in the wee hours of the morning Verónica Reyes’ extended family grinds corn to make the dough they use in the tacos they sell from their food truck in Mexico City.

“We cook the corn the night before and we grind it early in the morning, to serve people at 8:00 AM,” said Reyes, who has made a living selling food for years.

The family loads up the metal countertop, gas cylinders, tables, chairs, ingredients and over 60 kg of corn dough in their medium-sized truck before heading from their town of San Jerónimo Acazulco, some 46 km southwest of Mexico City, to whatever spot they have chosen that day to sell their wares.

When the taco truck packs up, it has sold just about all the food prepared that day.

The cooked corn dough takes on a yellow tone, an effect caused by a process called nixtamalisation – the preparation of corn or other grain, which is soaked and cooked in an alkaline solution, usually limewater, and hulled.

According to the United Nations Food and Agriculture Organisation (FAO), 25 percent of world food crops are contaminated with aflatoxins.

This technique dates back to before the arrival of the Spanish conquistadors in Mexico in the 15th century, when local indigenous people cooked corn this way.

Nixtamalisation significantly reduces aflatoxins – any of several carcinogenic mycotoxins produced by molds that commonly infect corn, peanuts and other crops.

“In Mexico aflatoxins are a serious problem,” Ofelia Buendía, a professor at the department of agroindustrial engineering at the Autonomous University of Chapingo, told IPS. “A major effort has been made to eliminate them. The most effective is the traditional nixtamalisation technique.”

She has specialised in “nixtamalising” beans, quinoa, oats, amaranth, barley and other grains, and in producing nutritional foods.

Mexico’s corn dough and tortilla industry encompasses more than 78,000 mills and tortilla factories, over half of which are concentrated in just seven of the country’s 31 states.

Nearly 60 percent of the tortillas sold were made with nixtamalised dough.

Corn is the foundation of the diet in Central America and Mexico, where the process of nixtamalisation is widely used.

But consumption of tortillas has shrunk in Mexico, from 170 kg a year per person in the 1970s to 75 kg today, due to the inroads made by fast food and junk food.

Mexico is now cooperating with Kenya in east Africa to transfer know-how and technology to introduce the technique, to help that country reduce aflatoxins.

Mexico and Kenya signed two cooperation agreements, one of which offers technical support and involves the sending of mills by Mexico’s International Development Cooperation Agency.

Kenya needs 45 million 90-kg bags of corn a year, and only produces 40 million.

According to the United Nations Food and Agriculture Organisation (FAO), 25 percent of world food crops are contaminated with aflatoxins, and the U.S. Centers for Disease Control and Prevention estimate that more than 4.5 billion people in the developing world have chronic exposure to them.

At 3:00 AM, the machines are turned on in the processing plant of the Comercializadora y Distribuidora de Alimentos Grulin food processing and distribution company in the town of San Luís Huexotla, some 50 km east of Mexico City.

The work consists of washing the corn cooked the night before, draining it, and grinding it to produce the dough for making tortillas and toast, which are packaged and distributed to sales points in the area.

“Nixtamalisation respects the nutrients in the corn, although some are lost in the washing process,” José Linares, director general of Grulin, told IPS. “There are faster systems of nixtamalisation, but they’re more costly. The technology is shifting towards a more efficient use of water and faster processing.”

His father started out with one tortilla factory, and the business expanded until the Grulin company was founded in 2013.

The corn is cooked for 90 minutes and then passes through a tank of limewater for 30 seconds before going into tubs with a capacity of 750 kg, where it remains for 24 hours. It is then drained and is ready for grinding between two matching carved stones.

Officials from the Kenya Agricultural and Livestock Research Organisation (KALRO) have visited Mexico to learn about nixtamalisation and test corn products.

The experts who talked to the Kenyan officials said the technique could be adopted by nations in Africa.

“In Africa they want to know about the process, because of its tremendous uses for food. Some variables can be influenced, such as texture and taste,” said Buendía. “The Chinese eat tortillas, so this technique could be adopted. These opportunities cannot be missed.”

Besides cultural questions, the availability of water and generation of waste liquid – known as ‘nejayote’ – can be problems. For every 50 kg of corn processed, some 75 litres of water are needed. The nejayote, which is highly polluting because of its degree of alkalinity, is dumped into the sewer system.

Academic researchers are investigating how to make use of the waste liquid to produce fertiliser, to reuse it in washing the corn, and to make water use more efficient.

“It would be necessary to overcome the cultural barriers, and make sure the taste of lime isn’t noticeable….The technique is replicable,” said Grulin’s Linares.

In 2009, the International Institute of Tropical Agriculture (IITA), the African Agricultural Technology Foundation (AATF), and the U.S. Department of Agriculture – Agricultural Research Service developed a biological control technology called AflaSafe, to fight aflatoxins in corn and peanuts. It is so far available in Nigeria, Burkina Faso, Gambia, Kenya, Senegal and Zambia.

Edited by Estrella Gutiérrez and Verónica Firme/Translated by Stephanie Wildes