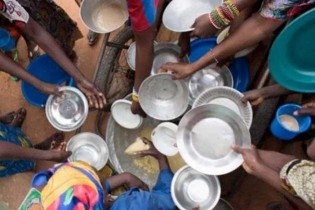 By Pascal Laureyn
In Laos, the lush forests are alive with the whines of drills that pierce the air. On the Mekong, a giant concrete wall rises slowly above the trees. The Don Sahong dam is a strong symbol, not only for a power-hungry Asia but also for what critics fear is a disaster in the making.
Next Page »

Food security is a condition related to the sustainable availability of food. The Food and Agriculture Organisation defines food security as "existing when all people, at all times, have physical, social and economic access to sufficient, safe and nutritious food which meets their dietary needs and food preferences for an active and healthy life." Established as a formal concept in 1974 at the World Food Conference, statistics are produced every year by the FAO, World Food Programme and International Fund for Agricultural Development in The State of Food Insecurity in the World. Food security is notably a concept around which severe global disparities exist. Sub-Saharan Africa is the region with the highest hunger rates, and it has shown only modest improvements in recent years. IPS brings you stories from around the world focussed on the importance of maintaining good agricultural and political practices to reduce hunger sustainably.