WASHINGTON, DC , Jan 21 2016 (IPS) - A major new study has revealed that the global seafood catch is much larger and declining much faster than previously known. 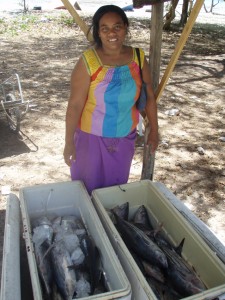 Around the world, subsidized fishing fleets from Europe, China and Japan have depleted the fish populations on which coastal residents depend. Credit: Christopher Pala/IPS

The study, by the University of British Columbia near Vancouver, reconstructed the global catch between 1950 and 2010 and found that it was 30 per cent higher than what countries have been reporting to the Food and Agriculture Organization (FAO) in Rome since 1950.

In the Caribbean islands, the catch was more than twice as large as previously reported and declining at a rate 60 per cent faster than the official rate, the Canadian study found.

“This trend needs to be reversed urgently, or else a lot of people who depend on the sea for affordable protein are going to suffer,” said Daniel Pauly, a fisheries scientist who led the study. “And climate change is just going to make things worse.”

Called the “Sea Around Us” and funded by the Pew Environment Group, the study involved more than 400 collaborators over more than a decade.

Since 1950, countries have been required to file to the FAO their entire catch of fish and seafood. Discards – fish caught unintentionally and of little commercial value – were exempted because the program was originally designed to monitor economic development, not overfishing.

But it was long suspected that some countries only bothered reporting the industrial catch by the larger vessels because these pay easy-to-track fees and because they unload their catch in a small number of places and are thus easiest to monitor.

The subsistence catch of people who fish for their families, the artisanal catch by those with small boats, the recreational catch by amateur fishermen all were thought to be greater than reported but to an unknown extent. For its part, the FAO gave no precise indications of how skewered its numbers might be. Dirk Zeller, the study’s co-author, said that virtually all countries routinely blend hard numbers with estimates and could “estimate the uncertainties around their reported data if they chose, but no one does.”

Getting an accurate handle on how much fish is being taken out is vital in a world where hundreds of millions depend on the sea for affordable protein, he said. “Fish stocks are like a stock portfolio,” explained Zeller. “Before you decide how much to sell, you want to know exactly how much you have and how much it’s growing or shrinking.”

Starting in 2002 Pauly and Zeller decided to reconstruct the global catch from 1950 to 2010 and fix the shortcomings of the FAO data set, the bedrock on which global fisheries policies stand. A task “only madmen would consider,” quipped Rainer Froese, a German fisheries scientist. “And now they have pulled it off.”

More alarmingly, the study found that the decline was triple the amount reported by the FAO, which recently called the catch “basically stable.”

Marc Taconet, head of the agency’s fisheries statistics, reaffirmed the validity of its data and “expressed reservations” with the notion that the new findings challenged “FAO’s reports of stable capture production trends in recent years.” He declined to elaborate.

In the Caribbean, Pauly said, the researchers found that fisheries officials were largely focused on reporting catches of species for which foreign fleets paid license fees, like tuna, billfish and sharks. “They usually forgot about the local fisheries,” he said.

Even the Bahamas, where the local recreational catch is offloaded at the main ports that are easily accessible to tourists, yielded surprising results. There, researcher Nicola Smith found that the authorities had no idea of the size of the catch of deep-sea fish like marlins, tunas and mahi-mahi that Ernest Hemingway made famous. She found that that catch was even bigger than the commercial catch, and that none of it was reported to the FAO.

“When I told the director of marine resources,” she recounted in an interview, “he was quite surprised.”

“It’s astounding,” added Smith, a Bahamian, “that a country that depends on tourism for more than half of its GDP has no clue as to the extent of the catch that plays a central role in attracting tourists.”

“And that doesn’t tell the whole story,” Pauly said. “What happened is that as reef fish like snappers and groupers were depleted, islanders ventured farther offshore in search of tuna, whose catch went from 7,000 tons in 1950 to 25,000 tons in 2004,” he said.

But the tuna stocks, long beyond the reach of the islanders, had been hard-hit by the highly-subsidized European, Asian and American fleets and their own numbers have been steadily dropping. Even as more and more islanders participated in the effort to substitute their vanished reef fish with tuna, that catch declined to 20,000 tons in the six years from 2004 to 2010, the study showed.

Conversely, the catch of groupers and snappers declined by a third from 2004 to 2010.

Climate change is expected to harm the Caribbean in several ways, Pauly says. Spikes of warm water temperatures that kill corals are becoming more frequent, leaving the corals less time to recover. The population of herbivores like parrotfish, on which the corals rely on to keep algae under control, has been decimated.

Finally, adds William Cheung, a marine ecologist at UBC who works with Pauly, the Caribbean’s warming waters are driving fish away from the equator. “We estimate the shift in the center of gravity of some species’ range will be 50 kilometers per decade,” he said. In part because animals reproduce less in a new environment, the warming waters will further diminish the overall fish populations in the Caribbean, with major decreases in the south and slight increases in the north, he explained.

To counteract these trends, Pauly said, Caribbean nations need to urgently collect batter data on how much fish they have and how much are being taken out, and then impose realistic catch limits. They should also create no-fishing marine reserves, as Bonaire and Barbuda have done, to allow thinned-out fish populations to grow back, which will then allow for larger, yet sustainable catches within a decade or so.