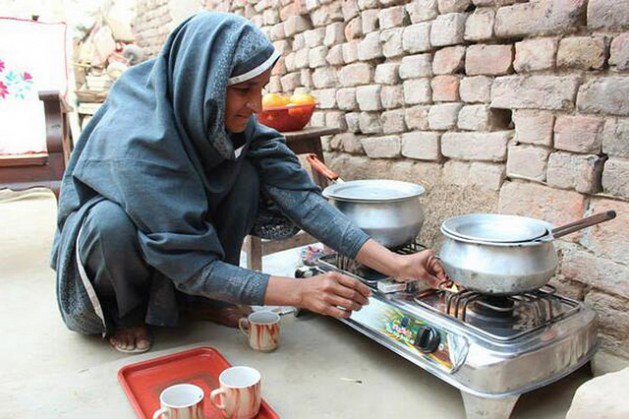 FAISALABAD, Pakistan, Jun 28 2016 (IPS) - Nabela Zainab no longer chokes and coughs when she cooks a meal, thanks to the new biogas-fueled two-burner stove in her kitchen.

Zainab, 38, from Faisalabad, a town 360 kilometers from the Pakistani capital of Islamabad, is among the beneficiaries of a flagship pilot biogas project to free poor households and farmers of their dependence on wood, cattle dung and diesel fuel for cooking needs and running irrigation pumps.

She got the biogas unit, worth 400 dollars, at a 50 percent subsidised rate from the NGO Rural Support Programme Network under the latter’s five-year Pakistan Domestic Biogas Programme (PDBP).

In the past, Zainab had to collect wood from a distant forest three times a week and carry it home balanced on her head.

“Getting rid of that routine is a life-changing experience,” she told IPS.

The four-cubic-meter biogas plant requires the dung of three buffalos every day to meet the energy needs of a four-member family, including cooking, heating, washing and bathing for 24 hours.

It saves nearly 160 kg of fuelwood a day, worth 20 to 25 dollars every month for a four-member family.

The wife of a smallholder vegetable farmer, Zainab says she has suffered from a cough and sore eyes for the last 20 years. “We have no access to piped natural gas in our village. The rising cost of liquefied petroleum gas (LPG) was not feasible either for us poor. However, we had no choice but to continue burning buffalo dung cakes or fuelwood,” she said.

Last January, cattle farmer Amir Nawaz installed a biogas plant of eight-cubic-meter capacity at a cost of 700 dollars under the PDBP. He got subsidy of nearly 300 dollars.

“I am now saving nearly 60 dollars a month that I used to spend on LPG,” he told IPS.

His plant is fueled by the dung of his six buffalos — enough to meet household gas needs for cooking and heating.

Nawaz also uses biogas to power wall-mounted lamps in his house at night, saving another 15 dollars a month.

“Above all, this has helped our children do schoolwork and for me to finish up the household chores in the evening hours,” Nawaz’s wife, Shaista Bano, said with a smile.

As many as 5,360 biogas plants of varying sizes have been installed in 12 districts of Punjab province over five years (2009-2015), ridding nearly 43,000 people of exposure to smoke from wood and kerosene.

Nearby, 500 large biogas plants of the 25-cubic-meter capacity each have also been introduced in all 12 districts of Punjab province under the PBDP, namely: Faisalabad, Sargodha, Khushab, Jhang, Chniot, Toba Tek Singh, Shekhapura, Gujranwala, Sahiwal, Pakpatan, Nankana Sahib and Okara.

Such plants provide gas for a family of 10 for cooking, heating and running irrigation pumps for six hours daily.

Rab Nawaz bought one of these large plants for 1,700 dollars. PBDP provided him a subsidy of 400 dollars as part of its biogas promotion in the area.

“I use the dung of 18 buffalos to produce nearly 40 cubic meters of gas every day to run my diesel-turned-biogas-run irrigation pump for six hours and cooking stove for three times a day,” he told IPS, while shoveling out his cattle pen in Sargodha.

The father of three says that after eliminating diesel — which is damaging to the environment and health, as well as expensive — he saves 10-12 dollars daily.

As a part of sustainability of the biogas programme, 50 local biogas construction companies have been set up. International technical experts trained nearly 450 people in construction, maintenance and repair of the biogas units.

Initiated in 2009 by the non-governmental organization National Rural Support Programme – Pakistan (NRSP-Pakistan), PBDP was financed by the Netherlands Embassy in Pakistan and technical support was extended by Winrock International and SNV (Netherlands-based nongovernmental development organisations).

“The biogas programme aimed to establish a commercially viable biogas sector. To that extent, the main actors at the supply side of the sector are private Biogas Construction Enterprises (BCEs) providing biogas construction and after sales services to households. At the demand side of the sector, Rural Support Programmes organized under the RSPN will be the main implementing partners, but will also include NGOs, farmers’ organizations and dairy organizations,” NRSP CEO Shandana Khan told IPS.

“The 5,600 biogas plants are now saving nearly 13,000 tons of fuelwood burning worth two million dollars and 169,600 liters of kerosene oil for night lamp use,” she said.

“Implemented at a total cost of around 3.3 million dollars, the biogas plants have helped reduce the average three to four hours a woman spent collecting fuel-wood and cooking daily. These women now get enough time for socialization, economic activity and health is returning to households thanks to the biogas plants… which provide instant gas for cooking, healing and dishwashing,” she said.

At present around 18 percent of households in Pakistan, mostly in urban areas, have access to natural gas. Over 80 percent of rural people rely on biomass (wood, cattle dung, dried straw, etc) for cooking, heating and other household chores, according to Pakistan’s Alternative Energy Development Board (AEDB).

Chairman of the AEDB Khawaja Muhammad Asif said, “It is unviable for the large number of rural households to have access to piped natural gas. However, biogas offer a promising and viable solution to meet energy needs of the households in the country’s rural areas, which are home to 60 percent of the people live and 80 percent of over 180 million cattle heads.”

He argued that some 80 million cattle and buffaloes and an estimated 100 million sheep and goats and 400 million poultry birds in the country can also provide sufficient raw material for substantial production of biogas.

“This way, the biogas can be tapped to cope with a range of health, environmental and health and economic benefits,” he stressed.

Pakistan is home to over 160 million head of cattle (buffalo, cow, camel, donkey, goat and lamb). The dung of these livestock can feed five million biogas plants of varying sizes, according to energy experts at the National University of Science and Technology (Islamabad) and Faisalabad Agriculture University (Punjab province).

This can help plug the yawning gas supply gap. According to government figures, 73 percent of 200 million people (a majority of them in rural areas) have no access to piped natural gas. Such people rely on LPG gas cylinders and fuelwood.