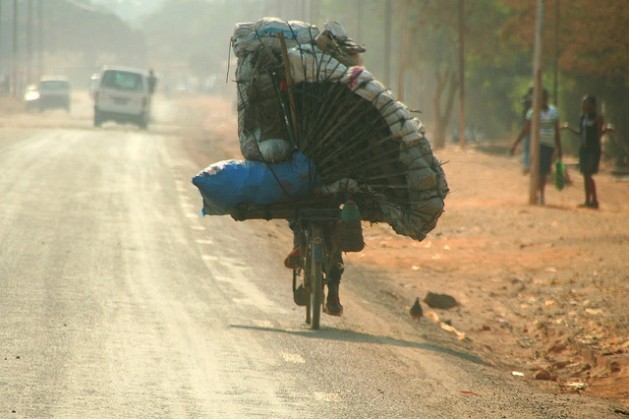 A Congolese man transports charcoal on his bicycle outside Lubumbashi in the DRC. An estimated 138 million poor households spend 10 billion dollars annually on energy-related products such as charcoal, candles, kerosene and firewood. Credit: Miriam Mannak/IPS

PEMBA, Zambia, Jun 16 2016 (IPS) - It’s just after two p.m. on a sunny Saturday and 51-year-old Moses Kasoka is seated outside the grass-thatched hut which serves both as his kitchen and bedroom.

Physically challenged since birth, Kasoka has but one option for survival—begging. But he thinks life would have been different had he been connected to electricity. “I know what electricity can do, especially for people in my condition,” he says.

“With power, I would have been rearing poultry for income generation,” says Kasoka, who is among the estimated 645 million Africans lacking access to electricity, hindering their economic potential.

“As you can see, I sleep beside an open fire every night, which serves for both lighting and additional warmth in the night,” adds Kasoka, inviting this reporter into his humble home.

But while Kasoka remains in wishful mode, a kilometer away is Phinelia Hamangaba, manager at Pemba District Dairy milk collection centre, who is now accustomed to having an alternative plan in case of power interruptions, as the cooperative does not have a stand-by generator.

Phinelia has daily responsibility for ensuring that 1,060 litres of milk supplied by over a hundred farmers does not ferment before it is collected by Parmalat Zambia, with which they have a contract.

“Electricity is our major challenge, but in most cases, we get prior information of an impending power interruption, so we prepare,” says the young entrepreneur. “But when we have the worst case scenario, farmers understand that in business, there is profit and loss,” she explains, adding that they are called to collect back their fermented milk. 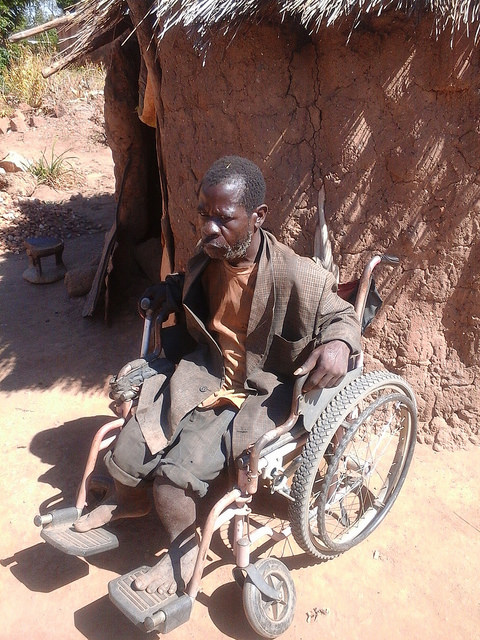 Moses Kasoka sits in his wheelchair outside his grass-thatched hut in Pemba, Zambia. Credit: Friday Phiri/IPS

The cooperative is just one of several small-scale industries struggling with country-wide power rationing. Due to poor rainfall in the past two seasons, there has not been enough water for maximum generation at the country’s main hydropower plants.

According to the latest Economist Intelligence Unit report, Zambia’s power deficit might take years to correct, especially at the 1,080MW Kariba North Bank power plant where power stations on both the Zambian and Zimbabwean side of the Zambezi River are believed to have consumed far more than their allotted water over the course of 2015 and into early 2016.

The report highlights that in February, the reservoir at Kariba Dam fell to only 1.5 meters above the level that would necessitate a full shutdown of the plant. Although seasonal rains have slightly replenished the reservoir, it remained only 17 percent full as of late March, compared to 49 percent last year. And refilling the lake requires a series of healthy rainy seasons coupled with a moderation of output from the power plant—neither of which are a certainty.

This scenario is just but one example of Africa’s energy and climate change nexus, highlighting how poor energy access hinders economic progress, both at individual and societal levels.

And as the most vulnerable to climate change vagaries, but also in need of energy to support the economic ambitions of its poverty-stricken people, Africa’s temptation to take an easy route through carbon-intensive energy systems is high.

“We are tired of poverty and lack of access to energy, so we need to deal with both of them at the same time, and to specifically deal with poverty, we need energy to power industries,” remarked Rwandan President Paul Kagame at the 2016 African Development Bank Annual meetings in Lusaka, adding that renewables can only meet part of the need.

But former United Nations Secretary General Kofi Annan believes Africa can develop using a different route. “African nations do not have to lock into developing high-carbon old technologies; we can expand our power generation and achieve universal access to energy by leapfrogging into new technologies that are transforming energy systems across the world. Africa stands to gain from developing low-carbon energy, and the world stands to gain from Africa avoiding the high-carbon pathway followed by today’s rich world and emerging markets,” says Annan, who now chairs the Africa Progress Panel (APP).

In its 2015 report Power, People, Planet: Seizing Africa’s Energy and Climate Opportunities, the APP outlines Africa’s alternative, without using the carbon-intensive systems now driving economic growth, which have taken the world to the current tipping point. And Africa is therefore being asked to lead the transition to avert an impending disaster.

The report recommends Africa’s leaders use climate change as an incentive to put in place policies that are long overdue and to demonstrate leadership on the international stage. In the words of the former president of Tanzania, Jakaya Kikwete, “For Africa, this is both a challenge and an opportunity. If Africa focuses on smart choices, it can win investments in the next few decades in climate resilient and low emission development pathways.”

But is the financing mechanism good enough for Africa’s green growth? The APP notes that the current financing architecture does not meet the demands, and that the call for Africa’s leadership does not negate the role of international cooperation, which has over the years been a clarion call from African leaders—to be provided with finance and reliable technology.

The Pan African Climate Justice Alliance (PACJA) mourns the vague nature of the Paris agreement in relation to technology transfer for Africa. “The agreement vaguely talks about technologies without being clear on what these are, leaving the door open to all kinds of false solutions,” reads part of the civil society’s analysis of the Paris agreement.

However, other proponents argue for home solutions. According to available statistics, it is estimated that 138 million poor households spend 10 billion dollars annually on energy-related products, such as charcoal, candles, kerosene and firewood.

But what would it take to expand power generation and finance energy for all? The African Development Bank believes a marginal increase in energy investment could solve the problem.

“Africa collects 545 billion dollars a year in terms of tax revenues. If you put ten percent of that to electricity, problem is solved. Second, share of the GDP going to energy sector in Africa is 0.49 percent. If you raise that to 3.4 percent, you generate 51 billion dollars straight away. So which means African countries have to put their money where their mouth is, invest in the energy sector,” says AfDB Group President, Akinwumi Adesina, who also highlights the importance of halting illicit capital flows out Africa, costing the continent around 60 billion dollars a year.

While Kasoka in Southern Zambia’s remote town awaits electricity , the country’s Scaling Solar programme, driving the energy diversification agenda, may just be what would light up his dream of rearing poultry. According to President Edgar Lungu, the country looks to plug the gaping supply deficit with up to 600 MW of solar power, of which 100 MW is already under construction.

With the world at the tipping point, Africa will have to beat the odds of climate change to develop. Desmond Tutu summarises what is at stake this way: “We can no longer tinker about the edges. We can no longer continue feeding our addiction to fossil fuels as if there were no tomorrow. For there will be no tomorrow. As a matter of urgency we must begin a global transition to a new safe energy economy.

“This requires fundamentally rethinking our economic systems, to put them on a sustainable and more equitable footing,” the South African Nobel Laureate says in the APP 2015 report.