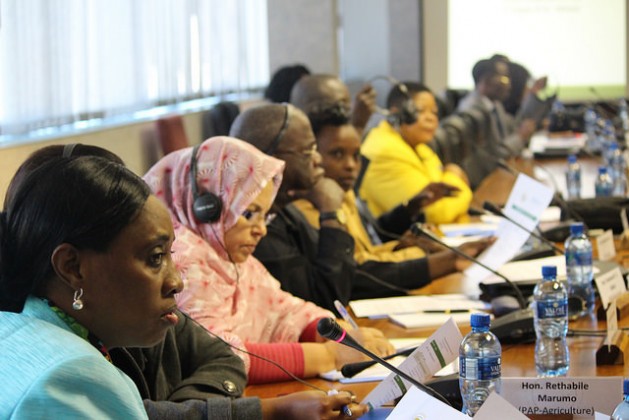 PAP officials attend the workshop for members of the Pan African Parliament and FAO to advance the Food and Nutrition Security Agenda. Credit: Desmond Latham/IPS

CAPE TOWN, Aug 2 2016 (IPS) - As over 20 million sub-Saharan Africans face a shortage of food because of drought and development issues, representatives of the U.N. Food and Agriculture Organisation (FAO) and the Pan African Parliament (PAP) met in Johannesburg to forge a new parliamentary alliance focusing on food and nutritional security.

Monday’s meeting here came after years of planning that began on the sidelines of the Second International Conference on Nutrition organised by the FAO in late 2014.

“The first port of call when there are food security issues is normally the parliament. We should be at the forefront of moving towards what is known as Zero Hunger." -- Dr. Bernadette Lahai

Speaking at the end of the day-long workshop held at the offices of the PAP, its fourth vice president was upbeat about the programme and what she called the “positive energy” shown by attendees.

“We have about 53 countries here in the PAP and the alliance is going to be big,” said Dr. Bernadette Lahai. “At a continental level, once we have launched the alliance formally, we’ll encourage regional parliaments so the whole of Africa will really come together.”

“This will be a very big voice,” she said on the sidelines of the workshop.

FAO Rome Special Co-ordinator for parliamentary alliances, Caroline Rodrigues Birkett, said her role was to ensure that parliamentarians take up food security as a central theme.

“The reason why we’re doing this is because based on the evidence that we have in the FAO, is that once you have the laws and policies on food and nutrition security in place there is a positive correlation with the improvement of the indicators of both food and security of nutrition,” she told IPS.

“Last year we facilitated the attendance of seven African parliamentarians to a Latin American and Caribbean meeting in Lima, and these seven requested us to have an interaction with parliamentarians of Africa,” she said.

A small team of officials representing Latin America and the Caribbean had traveled to Johannesburg to provide some details of their own experience working alongside the FAO in an alliance which had focused on providing food security to the hungry in South America and the island nations of the Caribbean.

These included Maria Augusta Calle of Ecuador, who told the 20-odd PAP representatives that in her experience working alongside officials from the FAO had helped eradicate hunger in much of the region. 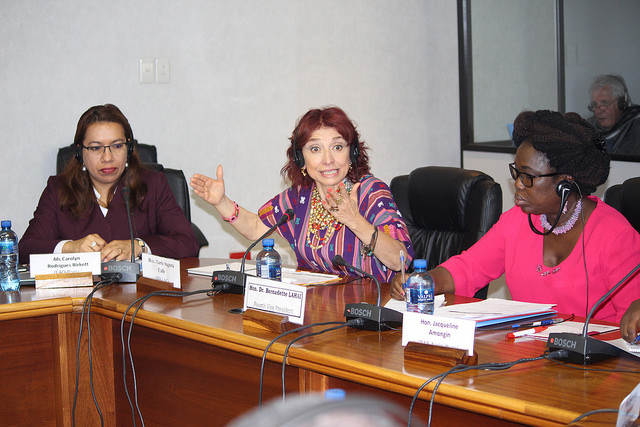 Caribbean representative Caesar Saboto of Saint Vincent and the Grenadines was also forthright about the opportunities that existed in the developing world to deal with hunger alleviation.

“It’s the first time that I’m traveling to Africa,” he said, “and it’s not for a vacation. It’s for a very important reason. I do not want to go back to the Caribbean and I’m certain that Maria Augusta Calle does not want to go back only to say that we came to give a speech.”

Saboto delivered a short presentation where he outlined how a similar programme to the foundation envisaged by those attending the workshop had drastically reduced hunger in his country.

PAP members present included representatives of sectors such as agriculture, gender, transport and justice as well as health. Questions from the floor included how well a small island nation’s processes could be used in addressing the needs of vastly larger regions in Africa.

“Any number can be divided,” said Saboto. “First you have to start off with the political will, both government and opposition must buy into the idea. If you have 20 million people you could divide them into workable groups and assign structures for management accountability and transparency,” he said.

“Food security is not only a political issue but a developmental issue,” she told IPS in an interview.

“The first port of call when there are food security issues is normally the parliament. We should be at the forefront of moving towards what is known as Zero Hunger,” she said.

But major challenges remain. After a meeting in October last year, the FAO had contracted the PAP with a view to targeting hunger in a new alliance. The PAP is a loose grouping of African nations and members pointed out that they were unable to get nation states to support an initiative without a high-level buy in of their political leadership.

Dr. Lahai was adamant that the workshop should begin addressing issues of structure. She stressed that co-ordination between the PAP, various countries and other groupings such as Ecowas (the Economic Community of West African States) and SADC (Southern African Development Community) should be considered.

“We need a proper framework,” she said. “It’s important to engage our leaderships in this process. With that in mind, I would suggest that we learn a great deal from our visitors who’ve had a positive experience in tackling nutrition issues in Latin America.”

In an earlier presentation, FAO representative for South Africa Lewis Hove had warned that a lack of access to food and nutrition had created a situation where children whose growth had been stunted by this reality actually were in the most danger of becoming obese later in life. The seeming contradiction was borne out by statistics presented to the group showing low and middle income countries could see their benefit cost ratio climb to 16-1.

Africa’s Nutritional Scorecard published by NEPAD in late 2015 shows that around 58 million children in sub-Saharan regions under the age of five are too short for their age. A further 163 million women and children are anaemic because of a lack of nutrition.

The day ended with an appeal for further training and facilitation to be enabled by the FAO and PAP leadership. With that in mind, the upcoming meeting of Latin American and Caribbean states in Mexico was set as an initial deadline to begin the process of creating a new secretariat. It was hoped that this would prompt those involved in the PAP to push the process forward and it was agreed that a new Secretariat would be instituted to be headquartered at the PAP in South Africa.

Dr Lahai said delegates would now prepare a technical report which would then be signed off at the next round of the PAP set for Egypt later this year.