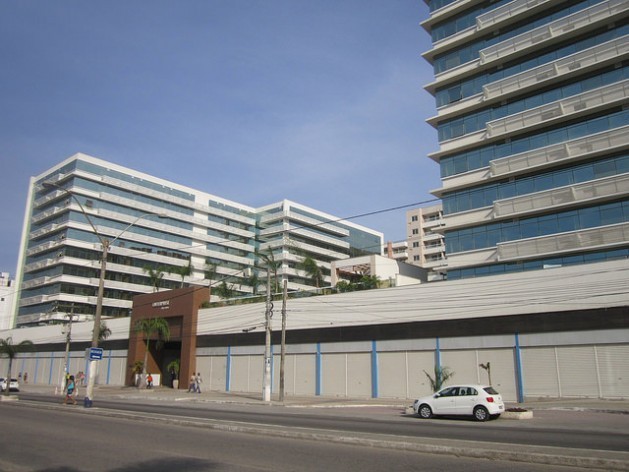 Modern office buildings and stores, all empty, are among the “white elephants” in the city of Itaboraí, near Rio de Janeiro, left by an aborted petrochemical and oil refinery complex in southeast Brazil. Credit: Mario Osava/IPS

RIO DE JANEIRO , Aug 3 2016 (IPS) - An era of mega-events and mega-projects is coming to a close in Brazil with the Olympic Games to be hosted Aug. 5-21 by Rio de Janeiro. But the country’s taste for massive construction undertakings helped fuel the economic and political crisis that has it in its grip.

It is no mere coincidence that President Dilma Rousseff, suspended during her ongoing impeachment trial over charges of breaking budgetary regulations, will face the final vote in the Senate this same month.

Over the past decade, large-scale investment projects and public works, some not yet finished, others even abandoned, have driven the economy, triggered controversies, and fed the dreams and frustrations of Brazilians, mirroring and accelerating the rise and fall from power of the left-wing Workers’ Party (PT).

The country’s economic growth and the international prestige of then-president Luiz Inácio Lula da Silva (2003-2011) played a decisive role in the 2007 choice of Brazil as host of the 2014 FIFA World Cup.

Two years later, Rio de Janeiro was selected as the venue for the 2016 Olympic Games.

In 2007 Rio hosted the Pan American Games, which kicked off the string of sports mega-events in Brazil, including the FIFA Confederations Cup in 2013.

The wave of mega-infrastructure projects also began at the same time, in response to the needs of the energy and transportation industries, mainly for the export of mining and agricultural commodities.

Large hydropower dams, railways, ports, the paving of roads and the diversion of the São Francisco River to ease drought in the arid Northeast, as well as numerous public works in cities, formed part of the Growth Acceleration Programme (PAC), which included tax breaks and credit facilities.

Rousseff, who also belongs to the PT, succeeded Lula in the presidency after an election campaign in which she was referred to as “the mother of PAC” – an allusion to her skill in implementing and managing the programme that involved thousands of construction projects around the country, as Lula’s chief of staff.

In the oil industry, the 2006 discovery of enormous offshore petroleum deposits below a two-kilometre thick salt layer under rock, sand and deep water in the Atlantic prompted the launch of another major wave of construction, including four large refineries, two petrochemical complexes, and dozens of shipyards to produce oil drilling rigs, offshore platforms and tankers.

The two biggest refineries, in the Northeast, were cancelled in 2015, resulting in some 800 million dollars in losses. Another is partially operating.

Work on the last one – and on the petrochemical complex of which it forms part, near Rio de Janeiro – was interrupted, leaving empty a number of office buildings and hotels that were built in surrounding towns and cities to service an industrial boom and prosperity that never arrived. 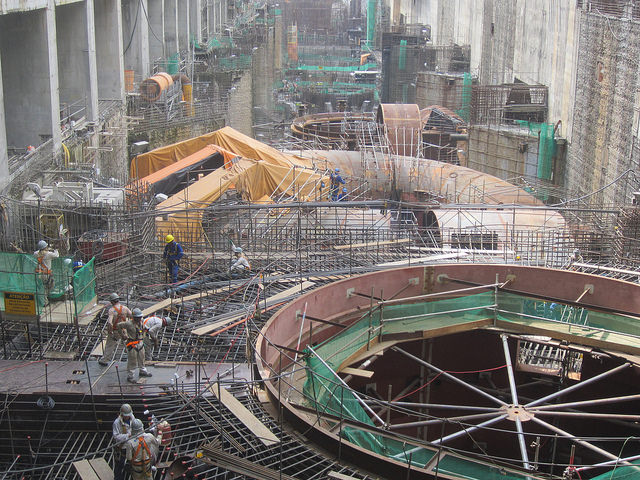 The Belo Monte hydroelectric plant’s turbine room in the northern Brazilian state of Pará, under construction in 2015. The mega-project is to be finished in 2019. Credit: Mario Osava/IPS

Most of the shipyards went under or shrunk to a minimum. In Niterói, Rio de Janeiro’s sister city, half of the 10 shipyards closed and over 80 percent of their 15,000 workers were laid off.

Possibly the house of cards of this fast-track development would have come tumbling down regardless, but several destructive factors compounded the problem and accelerated the approach of the disaster.

Oil prices plunged in 2014, simultaneously with the outbreak of the Petrobras bribery scandal that has ensnared hundreds of legislators and business executives.

In addition, the governments of Lula and Rousseff attempted to curb inflation by blocking domestic fuel price increases – another blow to the finances of Petrobras, the state oil company, which almost collapsed under the weight of so many difficulties.

The railways did not fare any better. Construction of two railroads – one private and another public – designed to cross the impoverished but fast-growing Northeast at different latitudes ground to a halt and are candidates to become white elephants due to the suspension of mining industry projects, whose output they were to transport.

As a result, the construction of a new seaport and the expansion of two others were also suspended.

At least the hydroelectric plants are in the process of being completed. But they are suffering the ups and downs of the power industry. There are delays in the installation of power lines and electricity consumption has slumped as a result of the economic recession that broke out in 2014, expanding spare capacity and driving up losses in power generation and distribution plants.

Belo Monte, the world’s third-largest hydroelectric dam, with a capacity to generate 11,233 MW, was accused of “ethnocidal actions” against indigenous people by the public prosecutor’s office and is facing 23 lawsuits on charges of failing to live up to legal requirements.

At the same time, it is also criticised by proponents of hydropower, because it will generate, on average, only 40 percent of its potential. With a relatively small reservoir, an alternative that was chosen to reduce the environmental impact, it will be at the mercy of the marked seasonal variations in water flow in the Xingú River, where the flow is 20 times lower in the dry season than the rainy season.

Roads have not formed part of the recent wave of mega-projects. Although they are being paved and widened, they were originally built in earlier waves of construction projects, in the 1950s and 1970s.

Brazil’s addiction to massive construction projects was probably born with the emergence of Brasilia, built in a remote, inhospitable location over 1,500 km from the biggest cities, São Paulo and Rio de Janeiro, in just five years, during the administration of Juscelino Kubitschek (1956-1961).

This bold feat was completed with the construction of roads running from the new capital in all directions.

But these long roads that cut across the country didn’t become paved highways, with proper bridges, until decades later.

Seen as a success story, Brasilia has prompted politicians to seek to make their mark with major construction projects, although the city was only part of the broader plan of Kubitschek, who pushed forward the development of Brazil’s steel industry by spurring the growth of the automotive industry.

The widespread belief that Brasilia was the big driver of settlement and development of the west and north of the country ignores the role played by the expansion of agriculture.

The 1964-1985 military dictatorship later fed the ambition of turning Brazil into a great power, with a nuclear programme that took three decades to build two power plants, the construction of two of the world’s five biggest hydroelectric plants, and roads to settle the Amazon.

The Trans-Amazonian highway, which was designed to cut across northern Brazil to the Colombian border but is incomplete and impassable for large stretches during the rainy season, is a symbol of failed lavish projects that helped bring down the dictatorship.

The origins of the megalomania can also be traced to the 1950 FIFA World Cup, for which the Maracana Stadium was built in Rio de Janeiro – for decades the largest in the world – holding held up to 180,000 spectators back then, more than double its current capacity.

The historic defeat that Brazil suffered at the hands of Uruguay in the final match in 1950, a devastating blow never forgotten by Brazilians, did not keep this country from hosting the 2014 World Cup, building new stadiums to suffer yet another shattering defeat, this time to Germany, which beat them 7-1 in the semi-finals.

Now, in the grip of an economic crisis expected to last for years, Brazil is unlikely to embark on new megaprojects. And the hope that they can drive development will have been dampened after so many failed projects and the heavy environmental, social and economic criticism and resistance.