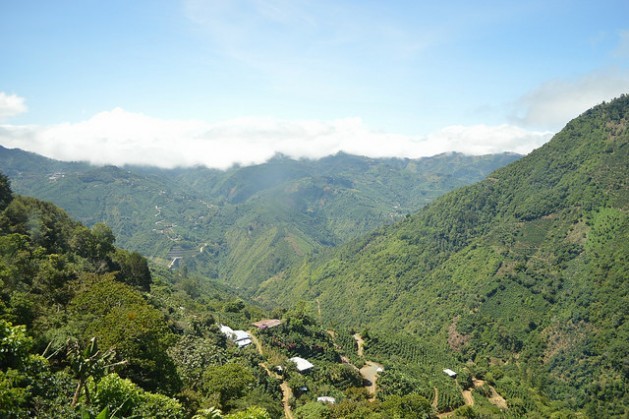 Farms in the mountainous Costa Rican region of Llano Bonito use plantain trees to provide shade for growing coffee plants, to adapt to climate change, while experts call for the diversification of coffee varieties in Costa Rica. Credit: Diego Arguedas Ortiz/IPS

LLANO BONITO, Costa Rica, Oct 5 2016 (IPS) - “Our coffee production per hectare has dropped due to early ripening of the fruit and diseases,” Maritza Cal coffee farmer in the mountains in southern Costa Rica, told IPS.

This story repeats itself all over the world. The report “A Brewing Storm”, released on Aug. 29 by the Climate Institute of Australia, warned that the main coffee producing countries will face difficulties such as the proliferation of plant diseases and the loss of arable land.

In the last few years, these kinds of warnings have given rise to a loose network of experts, government agencies, cooperatives and associations of producers that have the shared mission of saving local coffee production with the best available technology.

In the town of Llano Bonito in León Cortés, a chilly mountainous region 175 km south-east of San José, Calderón and13 other producers who are taking part in a training workshop spoke to IPS about the changes that their farms are undergoing.

“The ‘coffee rust’ fungus no longer has a specific time of year, but changes each year, coming earlier or later depending on the weather,” farmer Bienvenido Abarca told IPS, although what he learned in the workshop gave him some cause for optimism.

For more than two centuries, coffee has been deeply rooted within the history, culture and traditions of this Central American country of 3.8 million people. The National Theatre located in the country’s capital, for example, was built in the late 1800s with the funds from an export duty on coffee.

However, faced with fierce international price competition and the expansion of cities, the country’s coffee farms shrank from 34,000 in 1984 to 26,000 in 2014, according to figures from the “The State of the Nation 2015” report.

Some 40,000 families depend on coffee for a living, according to the Ministry of Agriculture and Livestock, growing Arabica, the variety of coffee that is grown in the country, on a total of just over 85,000 hectares of land. This makes it the third agricultural export and the eighth largest export overall, although it only represents two per cent of the coffee in the global market.

The remaining farms have adapted; in order to survive they have tried to position themselves as producers of premium quality coffee. The 673 coffee farmers in Llano Bonito, a third of whom are women, have formed a cooperative called Coopellanobonito, which exports to the United States.

Now they have to find a way to deal with climate change and the rise in temperatures.

“Costa Rica is considered internationally a top coffee producer. So we have to look for ways to remain positioned in the market,” Elías de Melo, a Brazilian expert on coffee and agroforestry systems at the Tropical Agricultural Research and Higher Education Centre (CATIE), based in Brazil, told IPS. 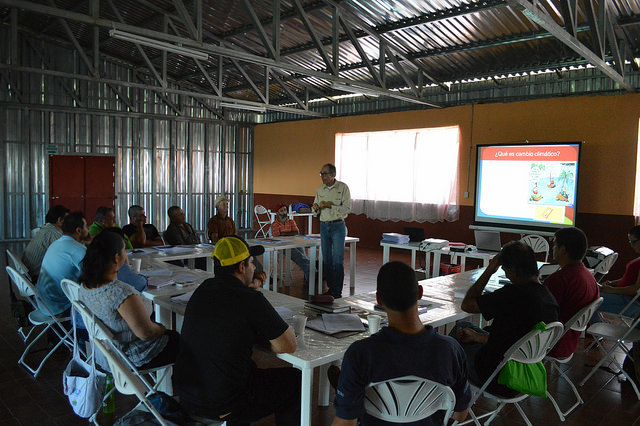 Farmers listen to Elías de Melo’s presentation, at the Llano Bonito Community Centre in León Cortés, Costa Rica, in a workshop aimed at training them in the adaptation of their coffee plantations to the raise in temperatures. Credit: Diego Arguedas Ortiz/IPS

Holding a mug of local coffee (“the best in Costa Rica,” he said), De Melo said that the coffee-growing areas act as biological corridors, preventing erosion, and are the livelihood of thousands of families.

“Coffee is socially and environmentally key for Costa Rica and if it were to disappear it would be devastating,” he said.

One of the proposed solutions is a project that De Melo brought to Llano Bonito. Along with the local Café Forestal Foundation, De Melo is visiting six coffee farming communities in the country to understand their problems and devise solutions together.
“We want to set up four pilot farms in this community, to function as outdoor classrooms,” Carlos Jones, the Foundation’s executive director told the producers.

The idea is to create four of these model farms in each of the six communities.

This project received 100,000 dollars from the international Adaptation Fund, which finances projects and programmes aimed at reducing the effects of climate change in developing countries. Through this mechanism Costa Rica obtained 10 million dollars to use in 30 projects to be implemented by the non-governmental Fundecooperación.

Costa Rica has gradually taken on a leading role in coffee production. In 2013 the country presented a voluntary initiative to reduce its greenhouse gas emissions in the coffee sector: NAMA (Nationally Appropriate Mitigation Actions) Café – the first agricultural NAMA in the world.
NAMA Café is also committed to climate change adaptation, said the head of the coffee division in the Ministry of Agriculture and Livestock, Luis Zamora.

“Coffee can withstand adverse conditions, but only up to a certain extent,” Zamora, one of the proponents of NAMA, told IPS.

How to avoid reaching that point referred to by Zamora? With adaptation measures, said the expert, such as planting trees in the coffee plantation to regulate the temperature through agroforestry systems, harvesting rainwater or using more resistant new varieties.

A common practice on coffee farms is to use fruit trees such as plantain trees in order to provide shade for the coffee plants and a number of additional advantages for producers.

“There can be no mitigation and adaptation to climate change without putting trees in the productive systems,” said De Melo.

Trees create a microclimate preventing problems related to high temperatures and soil erosion, while improving water filtration. A careful selection of trees can even diversify crops, while serving as a climate change adaptation measure.

“Now we come home with plantain, cassava, and taro (Colocasia esculenta, a tuber widely consumed locally), jocotes (Spondias purpurea, Spanish plum). All these are trees that give shade,” said Abarca.

However, solutions to continue producing coffee with rising temperatures must be found quickly, said Zamora, because “there is not much time to think,” given the advance of climate change.

Coffee farmers went through difficult times in 2013, when high levels of moisture and high temperatures allowed the coffee fungus or roya to spread through Central America.

These episodes force farmers to use new coffee varieties more resistant to diseases, like the so-called H1 hybrids, the Costa Rica 95 variety or the Brazilian Obata.

The farms need financial support, noted Zamora and De Melo, because to change plant varieties has a cost of about 8,000 dollars per hectare. Trees can take up to three years to produce their first harvest.

These solutions that are encouraged by experts and producers should come from the grassroots, even if they are scientifically proven.

This is demonstrated by a poll carried out by economist Milagro Saborío, who surveyed 300 coffee producing families about climate change for a joint project between CATIE and Conservation International.

The two regions studied showed different cultural conditions which made it necessary to come up with specifically tailored actions. “It’s not possible to devise a single national model,” Saborío told IPS.

“Suits have to be tailor-made, but there are things in common,” Ramírez told IPS.

FAO is working with coffee farmers throughout Central America, said the expert, to expressly help them to prevent and cope with the coffee fungus.