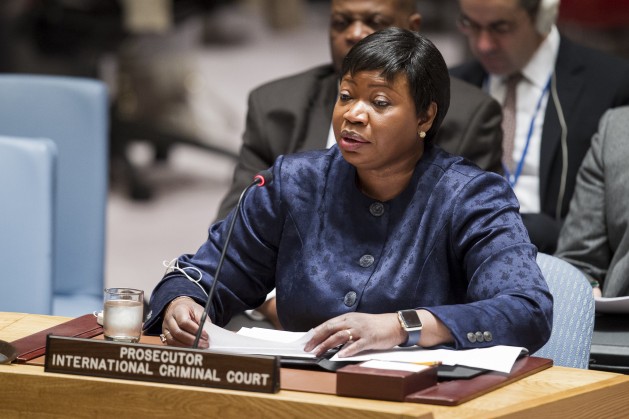 UNITED NATIONS, Dec 8 2016 (IPS) - The International Criminal Court (ICC) may have had a small reprieve this week from a string of African withdrawals, with Gambia’s newly elected President Adama Barrow telling various media outlets that there is no need for Gambia to leave the court.

Gambia, alongside Burundi and South Africa, was one of three African countries to announce it’s withdrawal from the ICC this year, with Namibia and Kenya rumoured to be close in heel.

Gambia’s questionable human rights record during outgoing President Yahya Jammeh’s twenty two year rule – may have put the West African country on the court’s radar. However under Jammeh’s leadership Gambia argued the reason for the withdrawal was that the ICC was institutionally prejudiced against people of colour, especially Africans. The withdrawal also followed Gambia’s repeated unsuccessful appeals for the Court to hold the European Union accountable for the deaths of thousands of African migrants who tried to cross over to its shores.

However, President-elect Barrow has praised the ICC for advocating good governance – which he intends for Gambia.

Addressing the UN General Assembly in September, Burundi’s Foreign Minister, Alain Nyamitwe, claimed that there are “politically motivated reasons which have pushed the ICC to act on African cases.”

Significantly, the ICC had announced its plan, in April, to launch an investigation into several human rights violations surrounding the upcoming elections and President Pierre Nkurunziza’s unconstitutional claim to remain in power for another term in Burundi.

There is no consensus in the AU to leave the ICC. Several African countries, including Zambia, Botswana, Tanzania, Malawi, Sierra Leone, Senegal and Nigeria have opposed withdrawal from the Court.

South Africa’s notice of withdrawal from the ICC was considered a particular blow to the Court, since South Africa was one of the court’s founding members and among its strongest supporters.

The withdrawal came after South Africa failed to arrest Sudanese president Omar Al-Bashir, who had been indicted by the ICC, when he visited South Africa to attend the 2015 African Union (AU) Summit. As a result, the ICC accused South Africa of not complying with cooperation procedures – which seemingly fractured their relationship.

UN Secretary-General, Ban Ki-moon, told the UN Security Council that the ICC departures could “send a wrong message on these countries’ commitment to justice.”

Some members of the AU have been calling for an exodus from the ICC since tensions with the Court first began in 2009 after the ICC issued an arrest warrant for President Omar Al-Bashir.

However, there is no consensus in the AU to leave the ICC. Several African countries, including Zambia, Botswana, Tanzania, Malawi, Sierra Leone, Senegal and Nigeria have opposed withdrawal from the Court.

The perception that the ICC is biased towards Africa has intensified over the past few years.

The UN’s establishment of temporary tribunals in the 1990s for war crimes in Rwanda and Yugoslavia acted as roadmaps for the launch of the ICC in July 2002.

The Court’s primary objective was to serve as a permanent international tribunal tasked with conducting investigations and prosecuting perpetrators of genocide, crimes against humanity and war crimes.

Africa represents the largest regional grouping of countries that are parties to the ICC, with 34 African nations having ratified the treaty, the Rome Statute, which established the court.

Since the court’s formation 14 years ago, 9 out of 10 of its active cases have been against nationals of African countries.

These include, Central African Republic, Mali, Ivory Coast, Libya, Kenya, Sudan (Darfur), Uganda and the Democratic Republic of Congo. This is the main reason why the ICC is accused of selective justice.

There are three ways through which a case can be brought forth to the ICC. The first is via submissions by individual governments of the countries concerned, as was the case with Uganda, Democratic Republic of Congo and the Central African Republic. The second is via self-initiated interventions by the ICC Chief Prosecutor, as was the case with Kenya and Ivory Coast. The third is via a UN Security Council referral, as was the case with Sudan and Libya – both of which are not parties to the ICC.

Evidently, the ICC has self-intervened in only two African cases. The other African cases have all come to the ICC through referrals by the countries themselves or by the UN Security Council.

Regardless of the fact that there have been cases before the ICC that were self-referred by the relevant African countries themselves, “a concern persists that the ICC appears to be targeting Africa in pursuit of political expediency,” said South Africa’s Chief Justice Mogoeng Mogoeng in a speech addressing the Africa Legal Aid Conference (AFLA) in 2014.

“The reality is that gross human rights violations have taken place and continue to take place beyond the borders of Africa and yet, so say the critics of the ICC, there does not seem to be as much enthusiasm to deal with those atrocities as is the case with those committed in the African continent” said Mogoeng.

ICC Chief Prosecutor Fatou Bensouda, a Gambian national, said, “with due respect, what offends me most when I hear criticisms about the so-called African bias is how quick we are to focus on the words and propaganda of a few powerful, influential individuals and to forget about the millions of anonymous people that suffer from these crimes,” said at an ICC Open Forum in 2012.

The greatest affront to victims of war crimes and crimes against humanity is to “see those powerful individuals responsible for their sufferings trying to portray themselves as the victims of a ‘pro‐Western’, ‘anti‐African’ Court…the ICC was established as a shield for the powerless not a club for the powerful,” said Bensouda.

Universality and equality before the law is one of the core ideals of the ICC. However, 3 permanent members of the UN Security Council- United States, Russia and China – are not state parties to the ICC. This has fuelled the perception that the ICC is not impartial and is essentially a ‘third world court’.

In January this year, ICC Prosecutor Bensouda opened the court’s first formal investigation outside Africa, into Georgia, for war crimes committed during the 2008 Georgia-Russia war.

Currently the ICC is examining a situation in Gabon, referred to the court by the government of Gabon, as well as situations outside Africa – including Colombia, Palestine, Afghanistan, alleged war crimes by British soldiers in Iraq and by Ukrainian separatist and Russian forces in Ukraine.

“Pulling out of the ICC is not the solution, we should be working towards fixing the court,” said Botswana’s Foreign Minister Pelomoni Venson-Moitoi.