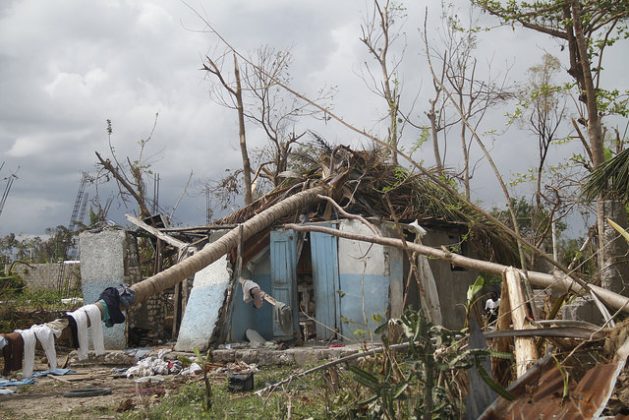 A poorly constructed house in Gelée, Les Cayes, Haiti is further damaged by trees that fell during the passage of Hurricane Matthew in October 2016. A senior Caribbean diplomat assigned to the European Union says climate change events are preventing many Caribbean countries from moving up the development ladder. Credit: Kenton X. Chance/IPS

BRUSSELS, Belgium, Jul 14 2017 (IPS) - With Antigua and Barbuda joining St. Kitts and Nevis as the two eastern Caribbean nations to attain middle-income country status, a senior diplomat has identified climate change as a major factor preventing other nations in the grouping from taking the same step forward.

"Those who are indigent, they would enter...an avenue in Dante’s Hell which is indescribable. So that is the real story.” --Prime Minister of St. Vincent and the Grenadines Ralph Gonsalves

“What I do want to say is that the other countries, the independent ones in the Organisation of Eastern Caribbean States (OECS) like Dominica, St. Lucia and St. Vincent, all of them are exposed to climate events annually and the climate events are devastating for us and you could have situations where 90 per cent of our GDP is wiped out in 22 hours, 23 hours, 15 hours, depending on how long a tropical storm sits on you,” says Sharlene Shillingford-McKlmon, chargé d’affaires at the Eastern Caribbean States Embassy to Belgium and Mission to the European Union

Shillingford-McKlmon’s comments came as she spoke to some of the developmental challenges affecting OECS nations and the response options available to them.

The heavy rains were associated with a low-level trough system, and with the traditional hurricane having ended almost a month earlier, many residents had dismissed the rains as just another tropical downpour.

However, by the time the hours-long downpour subsided in St. Vincent and the Grenadines around 7 p.m. on Christmas Eve, nine people were confirmed dead, three were missing and presumed dead, and 37 were injured.

Over 500 people were affected, of which 222 had to be provided with emergency shelter, while 278 took refuge with family, friends and neighbours.

The total damage/losses and cost of clean-up operations were estimated at 58.44 million dollars — some 17 per cent of the nation’s gross domestic product wiped out in a matter of hours.

In St. Lucia, there were six confirmed deaths related to the weather system and an estimated 1,050 persons were severely affected.

In Dominica, an estimated 106 households in approximately 12 communities were affected by the Christmas Eve weather system.

And, just over 18 months later, Dominica would be struck by yet another weather system, this time by Tropical Storm Erika on Aug. 24, 2015, which left at least 20 persons dead, and a number of other missing.

The storm also rendered 574 persons homeless and resulted in the evacuation of 1,034 others due to the unsafe conditions in their communities.

Damage and losses were estimated at EC$1.3 billion or 90 per cent of the country’s gross domestic product.

In noting the impact of these weather system on OECS nations, Shillingford-McKlmon pointed out that previously, it was only when a hurricane struck that the Caribbean saw such levels of destruction.

“Now, we have to be concerned about a tropical storm, because you really don’t know what is going to happen. And what has happened is that with respect to graduation from middle- to high-income status, if you do not retain your GDP per capita level for three years in a row, you can’t graduate — and it is really sad to say that some of our countries, the only reason they have not graduated to higher income status, where we receive less help, less official development assistance, less concessionary loans, is because of a storm or hurricane comes and devastates us.”

She said such a position puts Caribbean nations in a quagmire, because they want to be proud of the development they have achieved. However, at the same time, once they graduate to high-come countries status, one climate event can wipe out all those gains even as the countries would no longer qualify for official development assistance.

Shillingford-McKlmon said that currently, OECS nations do not have an alternative with respect to the criteria for graduation but are having that conversation with the European Union and other development partners.

“A country will graduate when its GDP per capita remains at a certain level for a three-year period and then it will move from one category to another. And so what we are doing, we are arguing this at the European Commission level and they’ve begun to have discussion with us that give us the impression that they are willing to consider new criteria or alternate criteria for graduation,” she said.

The diplomat argued that with the severe impact of climate events on OECS economies, “GDP per capita is not a full and complete reflection of a country’s development.

“We have inherent vulnerabilities as small island developing states that make it very difficult for us to be graduated and not receive aid when we could be struck down by environmental and other exogenous shocks and be severely affected,” she said.

Prime Minister of St. Vincent and the Grenadines Ralph Gonsalves has also spoken to the impact on climate change on national development – particularly the economic situation of individual families.

“Let us understand this. When we have a natural disaster, you go to bed at night middle class and after three hours of rainfall and landslides, torrential downpour, like we never used to have before the acceleration of man-made climate change, that person, in three hours, would move from middle class to poor,” he said in late June at Caribbean Climate Outlook Forum.

Gonsalves further said that after a few hours of intense rainfall, some persons who are poor become indigent.

“And those who are indigent, they would enter…an avenue in Dante’s Hell which is indescribable. So that is the real story.”