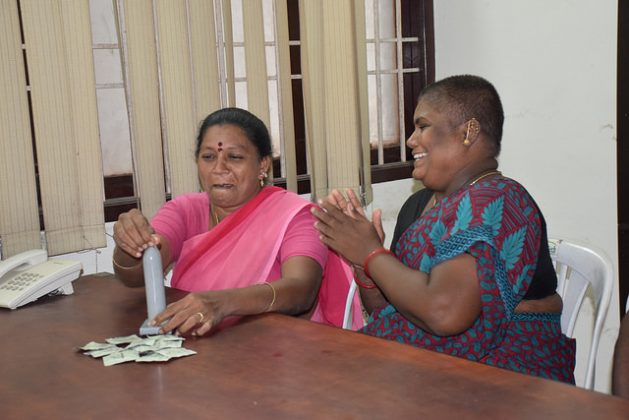 CHENNAI/LONDON, Jul 11 2017 (IPS) - In a semi-lit room of a southern Chennai neighborhood, a group of women sit in a circle around a table surrounded by large cardboard boxes of “Nirodh” – India’s most popular condom.

Clad in colorful saris, wearing toe rings and red dots on their foreheads, they look like ordinary housewives. Slowly, one of the women opens a box, takes out a handful of condoms and a wooden phallus. Sound of laughter fills the air as each woman takes her trurn to slip a condom over the phallus. It’s a rare, happy hour for these women who live a hard life as sex workers – a fact they carefully guard from their families.

“In our community, over 90 percent of people survive by begging. How can they ever afford any of these treatments?" --Axom, a 26-year-old transsexual man

Baby, who only goes by the first name, is in her forties and the most experienced of all when it comes to demostrating condom skills. A peer educator, Baby has been teaching fellow sex workers all over the city of Chennai how to practice safe sex and protect themselves from both HIV and sexually transmitted diseases.

Thanks to constant training and a generation of awareness, condoms are now part and parcel of almost all of the city’s 6,300 sex workers’ lives, she says. But their sexual health and protection from diseases still completely depend on their clients’ willingness to use a condom.

“We try our best to help the client understand that it is very important to wear a condom because that will keep us both safe from HIV and other infections like gonorrhea. But it needs some convincing. Most of them wear it only grudgingly,“ says Baby.

India is one of the largest manufacturers and exporters of condoms in the world. The government-owned Hindustan Latest Limited (HLL) produces over a billion condoms annually, including Nirodh. Of these, 650 million Nirodh condoms are given away annually free of cost for the safe sex campaign. But when it comes to female condoms, there is no free lunch and one must buy the condoms from a store.

AJ Hariharan is the founder and CEO of the Chennai-based Indian Community Welfare Organization (ICWO), one of the largest NGOs in the country working for the welfare of sex workers. Hariharan says that female condoms could be of immense help for the sex workers, but are extremely hard to access because of steep pricing.

A pack of male condom costs around 25 rupees, while a female condom is priced at 59 and above. This is far beyond the reach of most sex workers whose daily earnings are 200-500 rupees, which goes to support their families.

“At the current price, a female condom is an out of reach luxury for poor women. They will never be able to able to use this which is a shame because the average sex workers really need female condoms,” Hariharan adds..

The reason behind the “great need” is both self-empowerment and money, he explains: it takes some time to explain to a client why he must wear a condom and then help him put it on. But this requires time and often, the couple may have to wait before the man has an erection again. With a female condom, business can be done faster as she can save both her time and energy and serve him quick. For those women who rent a place for work, this can be very helpful as she can be with multiple clients in few hours and spend less on rent.

Organizations like ICWO have asked the government for a free supply of female condoms, says Hariharan, but have not received any so far. “This is one of the biggest unmet needs and it must be looked seriously into,” he says.

Despite their inability to afford female condoms, the sex worker community is luckier than other marginalized people of the city as they regularly access sexual and reproductive health services.

“There are eight hospitals in the city where we can go for a regular health check-up that includes having an HIV and STI test and take condoms,” says Vasanthi, a sex worker.

Healthcare for the Transgender

But for another sexual minority – the 450,000 strong transgender community – even a regular health check-up remains a struggle.

“One of the biggest challenges is finding a doctor who can and is willing to understand our problems,” reveals Axom, a 26-year-old transsexual man.

“The moment you walk into a hospital or a private clinic, the doctor will start judging your character and rebuke you for your sexual choice, instead of advising you what to do. It always starts with ‘why do you choose to be this way?’ After this, obviously you will never feel like opening up about your health issues,” Axom says.

Axom has been undergoing hormonal treatment. He hopes to have sex reassignment surgery – a multilayered medical treatment that will give him a prosthetic penis – and is spending over 10,000 dollars on the treatment. Thanks to his job in one of the world‘s biggest e-commerce firms, he can afford it, but for most others, such procedures remain a distant dream.

“In our community, over 90 percent of people survive by begging,” Axom says. “How can they ever afford any of these treatments?“

In 2012, India became a part of the FP2020 – a global partnership to achieve Sustainable Development Goals 3 and 5 and ensure universal access to sexual and reproductive health services and rights by 2030. India had committed among other things to invest two billion dollars over eight years to reduce the unmet need and address “equity so that the poorest and most vulnerable population have more access to quality services and supplies.“

On July 11, representatives from the FP2020 partner countries are participating in a summit in London again to inform and analyse the current status of delivering those commitments made four years ago.

For India, this is a good chance to tell the world what it has really done and recommit to achieve the goals that it had set, says Lester Coutinho, Deputy Director of Family Planning at the Bill & Melinda Gates Foundation.

“Governments, including India, are now responding to the gaps in the commitments that they made. Adolescents and youths are one area, supply chain is another, money for purchasing commodities is the third. Giving counseling and information to women and young people is another. There are tangible solutions in these areas that the government can adopt,” says Coutinho.

Meanwhile, in Chennai, transsexual men and woman like Axom hope that one day the government will subsidize the SRS and hormonal treatment for transgenders.

“The Supreme Court of India recognized the transpeople as a third gender in 2014, so we are now entitled to equal rights and facilities as other citizens do. If the government can offer free surgeries for life-threatening diseases, why can’t we expect it to offer us subsidies on treatments that can remove threats to our identities and the restoration of a normality in our life?” asks Axom.