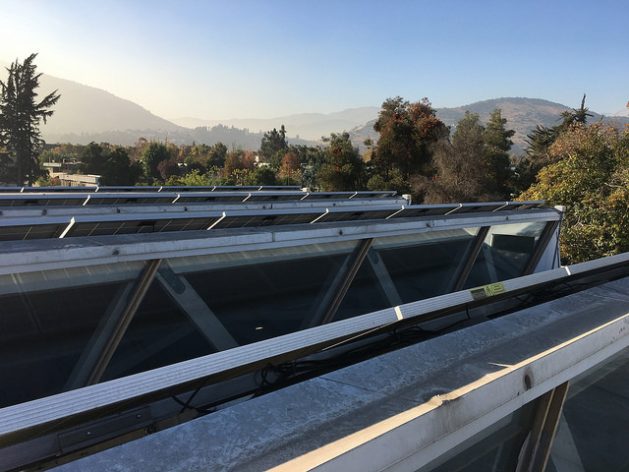 Commercial Habitat, a high-end home appliance store located in the upscale municipality of Vitacura, in the east of the Chilean capital, supplies part of its electricity consumption with energy generated from solar panels installed on its roof. Credit: Orlando Milesi/IPS

SANTIAGO, May 27 2018 (IPS) - Chile has become a model country for its advances in non-conventional energy, and is now debating whether citizens who individually or as a group generate electricity can profit from the sale of the surplus from their self-consumption – a factor that will be decisive when it comes to encouraging their contribution to the energy supply.

A Senate committee has analysed whether to eliminate the payments to citizens for their surplus energy established in a law in force since 2012, in response to an indication to that effect from the government of socialist former president Michelle Bachelet (2014-March 2018), which her successor, the right-wing Sebastián Piñera, is keeping in place.

Now it is being studied by the Chamber of Deputies, which has been warned by leaders of environmental organisations that the proposal to eliminate payments to citizens who inject the surplus energy they generate into the grid will sentence these initiatives to death.

“We will continue to encourage end users to be able to generate their energy because of the resultant benefits, but we must identify and avoid any inconvenience in terms of economy, especially for those who cannot install these systems, and for the sake of the security of the system,” he said.

Manuel Baquedano, president of the non-governmental Institute for Political Ecology (IEP), said “We hope that this proposal will not succeed and that we can continue with citizen-generated energy. Without the contribution of this sector, the goal of 80 percent non-conventional energy by 2050 will not be achieved.”

The expert believes that the authorities fear that citizen power generation, mainly solar, will become a business in itself and will not be used only for self-consumption and to cut the electricity bills of individuals or small businesses.

“They are legislating against a ghost,” he told IPS. “Energy should be born from thousands of connected points and by a system that allows buying and selling.”

The current installed electricity generation capacity in Chile, a country of 17.9 million inhabitants, is 22,369 MW. Of this total, 46 percent comes from renewable sources (30 percent hydropower), and 54 percent is thermal (21 percent coal).

All electricity generation is in private hands, most of it based on foreign capital. Consumption, which is constantly growing, reached 68,866 GW-h in 2013.

Chile’s solar and wind energy potential is 1,800 GW, according to a study by the Ministry of Energy and the German Agency for Technical Cooperation (GIZ).

If only five percent of the Atacama Desert in northern Chile were used to generate solar energy, 30 percent of South America’s electricity demand could be met, according to the Solar Energy Research Centre (SERC).

During Bachelet’s four-year term, Chile made an unprecedented leap in non-conventional renewable energies (NCRE), which went from contributing five percent of generation in 2013 to 20 percent in 2017.

“Solar energy showed the greatest growth, from 11 MW in early 2014 to 2,080 in late 2017, followed by wind energy, which grew from 333 to 1,426 MW,” said environmental engineer Paula Estévez in the book Energy Revolution in Chile, published by former Chilean Minister of Energy Máximo Pacheco on May 10.

According to Baquedano, “In the country’s energy revolution, the main thing is indeed the change towards renewable energy that took place. Chile’s energy mix is going to be 100 percent renewable at some point.”

Baquedano warned, however, that “the benefits of this energy revolution from the productive point of view have been only for the private sector and have not been passed on to the public sector.”

Prudencio said that “to date, there are approximately 16 MW of installed capacity of systems under Law 20,571 (payments to residential generators), which is equivalent to more than 2,600 operating projects throughout the country.”

A few cases in point

Ragnar Branth, general manager of Commercial Habitat, a high-end furniture and home design store in the municipality of Vitacura in eastern Santiago, installed solar panels on the roof to power a five-kW photovoltaic plant whose generation saves 13.5 percent in annual electricity bills.

“There is a benefit in the monthly fee, but the initial investment is quite significant. We’re talking about more than 20 million pesos (about 32,200 dollars) in the purchase of panels and their installation alone, and that is not compensated in savings until at least the fifth or sixth year of consumption,” he told IPS. The Canela Wind Farm, with 112-m-high wind turbines and an installed capacity of 18.15 megawatts (MW), generates electricity with the force of the winds coming from the sea in the Coquimbo region of northern Chile. Credit: Orlando Milesi/IPS

“The government took a good first step with the cogeneration law. However, some adjustments are needed, including the recognition of 100 percent of the energy generated and some kind of benefit in the investment project,” he said.

“If the government wants this to spread and wants there to be significant cogeneration, there has to be a benefit in the investment or some form of tax reduction or benefit,” he added.

In the agricultural county of Buin, south of the city of Santiago, 99 citizen shareholders convened by the IEP financed the community project Solar Buin Uno that built a 10 kW photovoltaic solar plant connected to the grid.

Much of the energy is delivered to the Centre for Sustainable Technologies (CST), and the rest is injected into the grid. But the local distribution company pays only up to 60 percent of the value of the kWh billed to the CST. That is, it pays for the surplus only a portion of what it charges its users.

The generation by individuals received a special boost with the Distributed (decentralized) Generation Law, in force since 2017, also known locally as citizen generation.

Andrés Rebolledo, the last energy minister in the Bachelet administration, explained to IPS that this law “aims to encourage and give signals for the generation by citizens and show that homes and small businesses can generate their own energy based on NCRE.”

The former minister said there has been “exponential growth” of citizen generators and stressed that the modification being debated by parliament raises the possibility that they could increase their potential from 100 to 300 kW, favouring small and medium enterprises.

“The objective and vision is that the progress that Chile has made in terms of NCRE generation at the level of large plants can also be taken advantage of at the citizen level and that in this way households can generate their own electricity, save on their electricity bills and at the same time contribute to a more sustainable model,” he said.

“This implies an effort to strengthen the distribution networks, to have another form of measurement so that households can manage their own consumption and generation and, ultimately, so that they can become prosumers, that is, for a household to be both a producer and a consumer of energy at the same time,” he said.

The former minister explained that the request for a debate in parliament “was intended to try to send out signals and offer incentives so that more people could make an investment and this could become accessible to all, always taking care that households do not turn this into a business but rather for their own consumption.”

But non-governmental organisations say it will be a setback if the payment received for the injection of energy into the grid generated by citizens is eliminated.

According to Sara Larraín, executive director of Chile Sustentable, the proposed modification “eliminates the payment for the energy surplus injected by the residential generator over its own consumption.”

That, she told IPS, “discourages households from investing in self-generation and recovering their investment in less time thanks to the retribution for the electricity fed into the grid.”

Speaking to members of parliament, Larraín said that the reform “is a monopolistic distortion in favour of distribution companies that already constitute a monopoly as concessionaires of the distribution service.”

The president of IEP, Baquedano, said that the installation of a second citizens’ plant in the north of the country was suspended pending the legislative decision, “because the model will not work if this legislation is approved.”

“There’s a question mark over what’s going to happen to the energy generated by citizens. The government will have to understand that if citizen energy runs out, the environmental movement will not keep quiet. The conflicts will return, that’s my thesis, and not just my thesis because we are also preparing the scenarios,” he concluded.