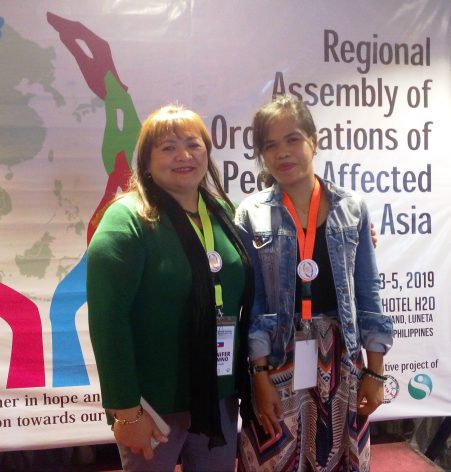 MANILA, Mar 3 2019 (IPS) - Jennifer Quimno could put anyone at ease. So when she travels across the Philippines as part of peer to peer programme that helps identify new leprosy cases, people generally allow her to examine them.

“We met a young boy, about 16 years of age, who had symptoms of leprosy, and we needed to examine and send pictures of his skin rashes to the doctors for diagnosis,” Quimno told IPS. Quimno, herself a former leprosy patient, was able to put the teenager at ease. “One of his rashes was on his buttocks. He was a little embarrassed to show it at first, but when I asked him nicely, he let us take a look.”

That unique sensitivity toward persons affected by leprosy is a valuable resource in identifying new cases and encouraging patients to seek treatment, Frank Onde, the president of the Coalition of Leprosy Advocates of the Philippines (CLAP) explained.

“Strengthening the participation of persons affected by leprosy is the most effective way to reduce the burden on government health departments,” explained Onde, one of the keynote speakers at the Regional Assembly of Organisations of People Affected by Leprosy in Asia. The assembly is being held in Manila, Philippines, Mar. 3 to 5.

Under the programme organised by CLAP, former patients are trained in community outreach and help to identify potential cases for diagnosis and treatment. Using people who have personal experience with the disease helps to reduce the reluctance of leprosy sufferers to seek treatment, Onde said. Not only can the outreach workers relate on a personal level with others affected by leprosy, also known as Hansen Disease, their own experience also helps healthcare personnel make accurate diagnoses, he added.

Launched in the cities of Manila and Cebu in November 2018, the programme, ‘Strengthening Participation of People Affected by Leprosy in Leprosy Service’, known as SPP, is currently working among known affected communities. It pursues the twin objectives of gathering demographic information to update the Philippine Department of Health database and identifying relapse or new leprosy cases.

Quimno, who is a field health officer with the regional Department of Health office in Cebu, said that personal experience helps to build trust. “We know what they are experiencing,” she explained. “We can also tell them exactly what the consequences of not seeking timely treatment will be.” 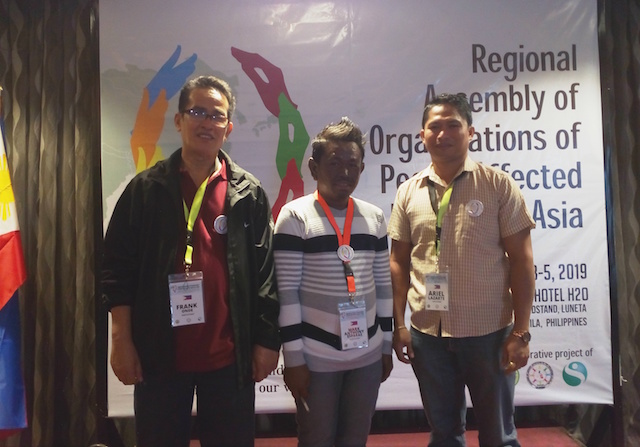 While CLAP’s activities are officially supported at the national government level—the coalition is represented on the Department of Health’s National Leprosy Advisory Board—it is at the smallest level of government where the initiatives of the coalition’s individual organisations are substantially embraced.

“We coordinate with local government units at the municipal and barangay [village] level, including the mayor’s office and the city or municipal health official’s office,” Quimno explained. “Since our individual member groups are the ones doing most of the work right in their own communities, they are really embraced by their local officials.”

Mark Anthony “Macoy” Esparas, a CLAP outreach volunteer in Manila, agreed. “We do receive a lot of help from the local governments,” he told IPS. “What we do is helping them as well.”

CLAP advisor Joseph “Boyet” Ongkiko highlighted the success of one CLAP member group in Cotabato, Mindanao, southern Philippines, which formed a cooperative of motorcycle taxi drivers to provide livelihoods for people affected by leprosy. “At first, the community was reluctant to patronise the drivers,” Ongkiko told the conference attendees. “Now, they have been accepted so well, that the cooperative even has non-Hansenite members.”

Other livelihood activities pursued by the member groups of CLAP—the coalition represents a total of 19 local organisations across the Philippines—include production and marketing of various household products, clothing, and small-scale farming.

While CLAP’s initiatives are steadily gaining traction among people affected by leprosy and local communities alike, the organisation is concerned about its prospects for sustainability.

“That is our biggest challenge right now,” Onde said. “At the moment, our financial support is really only coming from the Sasakawa [Memorial Health] Foundation (SMHF), and we would like to better secure our future.” SMHF, along with its parent body the Nippon Foundation (TNF) are co-sponsors of the assembly along with the Philippine government-run Culion Sanitarium and General Hospital (CSGH) and the Coalition of Leprosy Advocate of the Philippines (CLAP).

Financial sustainability is a common worry for leprosy advocacy groups throughout the region, but in the Philippines, Onde explained, CLAP and other organisations face a unique challenge. In 2013, a large-scale conspiracy dubbed the “Pork Barrel” scam and involving the misappropriation of billions in legislators’ development funds was exposed. Funds intended for local projects were diverted to fabricated non-government organisations and then pocketed by the scam perpetrators, including a number of lawmakers.

“Since the Pork Barrel scam, it has become difficult for a lot of civil society groups, not only us, to attract donors,” Onde said. “So one of our important tasks is to try to share information about what we’re doing to convince potential financial supporters that we are a legitimate, sustainable organisation.”

One advantage for CLAP is its close connection to the government’s own leprosy control efforts. “We have a consultative role in the government’s National Leprosy Control Programme and the Leprosy Roadmap 2016-2022,” Onde said. “That does help give us some credibility, and of course, we strive to do good work to match that.”