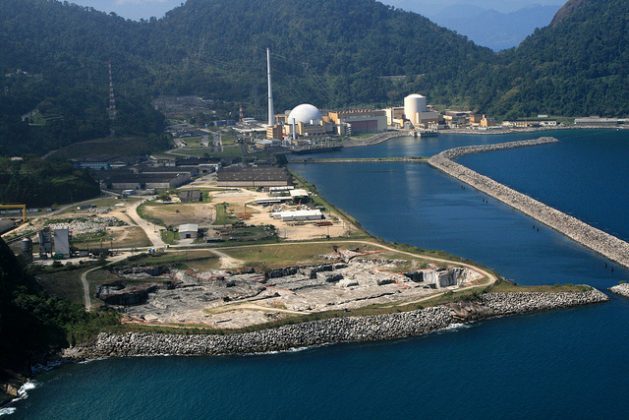 Aerial image of the area where the third nuclear power plant is to be built in Angra, next to the Angra 1 and Angra 2 plants, in a coastal area near the city of Angra dos Reis, south of Rio de Janeiro, in southeastern Brazil. Credit: Divulgação Eletronuclear

RIO DE JANEIRO, Mar 29 2019 (IPS) - Two military-inspired initiatives are leading Brazil’s new government, which includes a number of generals, down the path of mega-projects, which have had disastrous results in the last four decades.

Completing the country’s third nuclear power plant and setting the construction of eight others on track is the plan under study, announced by the Minister of Mines and Energy, Admiral Bento Albuquerque.

Brazil’s extreme right-wing government risks repeating the disaster of the nuclear programme of the 1964-1985 military dictatorship , which in the 1970s also began to build nine generating units and managed to put only two in operation, at a cost of tens of billions of dollars, while leaving a third plant unfinished.

A widespread paranoia among the Brazilian military is the alleged threat to national sovereignty posed by indigenous reservations and non-governmental organisations (NGOs), which they say could lead to a declaration of independence or to the "internationalisation" of parts of the Amazon rainforest.

Another major project, which has been promised by decree before April, is to build a highway, a hydroelectric plant and a bridge over the country’s largest river, in a well-preserved part of the Amazon rainforest.

It is an old proposal by retired General Maynard Santa Rosa, head of the Strategic Affairs Secretariat of the Presidency, who defends it mainly for reasons of national security.

The goal is to generate electricity for the middle reaches of the Amazon basin, where Manaos, a city of 2.1 million people, is located, and to promote local development to curb international environmental and indigenous organisations, the general wrote in a 2013 article.

A widespread paranoia among the Brazilian military is the alleged threat to national sovereignty posed by indigenous reservations and non-governmental organisations (NGOs), which they say could lead to a declaration of independence or to the “internationalisation” of parts of the Amazon rainforest.

President Jair Bolsonaro, a former army captain, warned of the dangers posed by the Triple A, an Andes-Amazon-Atlantic ecological corridor, although it is merely a proposal by the Colombian NGO Gaia Amazonas, as a way to protect nature in the far north of Brazil and parts of seven other countries that share the Amazon basin.

That was the reason, according to the president in office since January, that Brazil decided not to host the 25th Conference of the Parties to the United Nations Framework Convention on Climate Change (COP25), which in the end will be held in Chile in January 2020.

Retired General Augusto Heleno Pereira, head of the Institutional Security Cabinet, with the rank of minister, has repeatedly mentioned the fear that Brazil will lose parts of the national territory if indigenous communities, especially groups with reservations along the border, join together with NGOs or international agencies to seek independence.

The new government is the most militarised in Brazilian history, including more army, navy and air force officers than in any other period, including the last military dictatorship.

In addition to eight ministers, there are more than 40 other high-level government officials who come from the military. And that presence is set to expand, since the ministers of Education, Ricardo Velez Rodriguez, and Environment, Ricardo Salles, are in favor of the militarisation of schools and of their ministries. 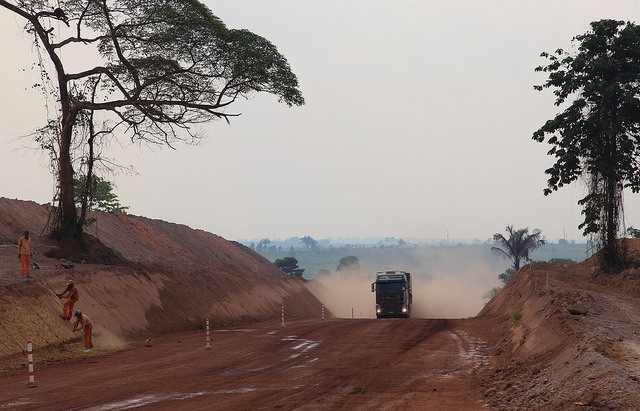 Rebuilt but unpaved portion of the BR-163 highway, in the Amazonian state of Pará, in northern Brazil. The government of Jair Bolsonaro wants to build a section of the road that was in the original design but was not even marked out in the middle of the Amazon rainforest. Credit: Fabiana Frayssinet/IPS

Military thinking, therefore, orients various sectors of the government. This is the case of the occupation of the Amazon rainforest by large infrastructure works. “Integrating in order not to hand over” the Amazon was the slogan of the dictatorship, which has been taken up again by the current administration.

In the energy sector, the nuclear option was implicit in the appointment of Admiral Albuquerque, as he was formerly the navy’s director general of nuclear and technological development.

He was in charge of a programme to build four conventional submarines, the first of which was launched in December, and a nuclear-powered submarine.

The navy developed a parallel nuclear programme, kept secret for several years, that succeeded in mastering uranium enrichment technology, even though Brazil had assumed international commitments to renounce any use of nuclear weapons.

Multiplying the number of nuclear power plants is part of the technological and strategic plans of the military that consider the advance of knowledge in that area essential.

In addition, Brazil has large uranium deposits and developed a nuclear fuel and equipment industry that would be boosted by the demand created by new power plants and submarines.

But there is a strong possibility of repeating the frustration of the programme initiated in the 1970s, due to similar financial difficulties. In the face of the foreign debt crisis of the 1980s, several mega-projects of the military dictatorship, labeled “pharaonic” by critics, were aborted.

Brazil acquired its first nuclear power plant in the United States, with a reactor from Westinghouse. It was named Angra 1 because it was installed 130 km west of Rio de Janeiro as the crow flies, on the edge of the sea, in the municipality of Angra dos Reis.

Meanwhile, in 1975, the military government signed a nuclear cooperation agreement with Germany, which included the construction of eight other plants, with technology transfer.

Only the first of them, Angra 2, installed in the same small bay surrounded by mountains, finally began to operate – after a process that lacked transparency – in 2000, generating 1,650 megawatts.

The second German technology unit, Angra 3, began to be built in 1984, although work was interrupted two years later and only resumed between 2010 and 2015.

Reviving a project of astronomical costs sounds like an unlikely undertaking for a government that pledged to voters that it would carry out a fiscal adjustment, starting by reducing the deficit of the social security system.

Besides, the plant would be using outdated technology and equipment stored for more than three decades, all from Germany, which is dismantling its last nuclear plants.

Against the expansion of Brazil’s nuclear industry conspires the cost of its energy, much more expensive than hydropower, which is abundant in Brazil, and than solar and wind energy – alternatives sources whose cost is steadily dropping.

Above all, megaprojects have a track record that includes many failures.

The highway that General Santa Rosa wants to promote in the Amazon is precisely the northernmost and abandoned stretch of one of the mega-projects designed by the military dictatorship and whose construction began in the early 1970s.

BR-163 was supposed to cross the entire Brazilian territory from south to north, stretching a distance of 3,470 km. But construction came to a halt in Santarém, where the Tapajós River flows into the Amazon River. It was a white elephant for more than two decades, until the expansion of soybeans in the state of Mato Grosso made it useful again.

The idea of the new project is to complete it up to the Surinam border, but it is not economically justified. The stretch where the largest soybean production is transported to the ports for export is economically viable, but 90 km of that stretch are still not paved, which would require a large investment.

The government of President Luiz Inácio Lula da Silva (2003-2011), of the leftist Workers’ Party (PT), also unleashed a wave of mega-projects that largely failed, such as railways, ports, shipyards, refineries and petrochemical plants, and turned into corruption scandals.

Large hydroelectric plants were completed, but triggered protests from local populations, which tarnished their image. And that would likely be the reaction if the current government’s works in the Amazon continue to forge ahead, since they would cause damage to a number of indigenous and “quilombola” – Afro-descendant communities – territories.