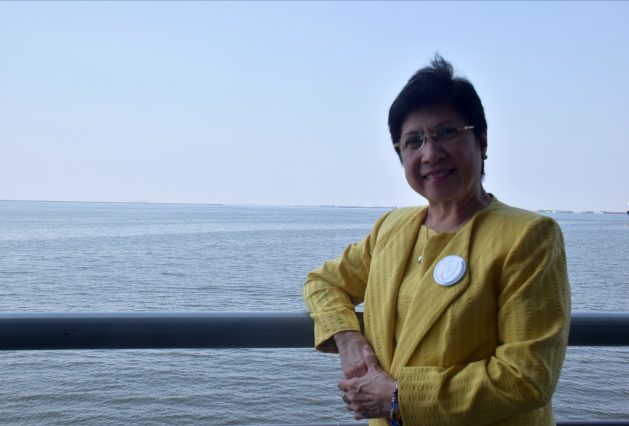 Dr Maria Francia Laxamana, the Assistant Secretary in the Philippines Ministry of Health, eels strongly about the social exclusion and stigma experienced by the leprosy patients and is eager to make a notable change in the way the society perceives leprosy and those who live with it. Credit: Stella Paul/IPS

MANILA, Mar 3 2019 (IPS) - Dr. Maria Francia Laxamana is the Assistant Secretary in the Philippines ministry of health. With nearly two decades of  work both as a senior government official and also as an expert in several non-government organisations, Laxamana has deep insight into the issue of leprosy in this Southeast Asian nation and the challenges faced by those who are affected by the disease.

She feels strongly about the social exclusion and stigma experienced by the leprosy patients and is eager to make a notable change in the way the society perceives leprosy and those who live with it.

On the sidelines of the ongoing  Regional Assembly of Organisations of People Affected by Leprosy in Asia in Manila, Laxamana tells IPS how a new, holistic approach is needed to eradicate leprosy  and  improve the quality of life for all leprosy patients.

The three-day event was organised by the Philippine government-run Culion Sanitarium and General Hospital (CSGH), the Coalition of Leprosy Advocate of the Philippines, and the Sasakawa Memorial Health Foundation (SMHF) and its parent organisation the Nippon Foundation (TNF). Chairman of TNF and the World Health Organisation (WHO) goodwill ambassador for Leprosy Elimination, Yohei Sasakawa, was recently awarded the Gandhi Peace Prize by the Indian government for his work towards the elimination of leprosy worldwide.

She also informs how small measures like helping the children of leprosy-affected families can help remove societal stigma and  pave ways for social inclusion.

Inter Press Service (IPS): How and at what point is it decided to separate a family from the community?

Dr Maria Francia Laxamana (MFL): Previously, it was the government that decided. If a child tested positive, it would be separated from the mother. That used to be very harsh.  But now, its not like that anymore. Now if a baby shows the symptoms, the baby is tested and if the results are positive, then the baby is treated along with the mother and the father, but it stays with the parents. The treatment now is family based.

IPS: Typically, who are the leprosy patients in the Philippines?

MFL: Actually, generally those who are afflicted by leprosy are poor people. The main reasons are that  (lack of) nutrition, lack of awareness, remote location of their areas and lack of access to the services.

IPS: Have you met anyone whose condition matches this? How did it change you?

MFL: Yes. In the Autonomous Region of Muslim Mindanao, I met a woman – a mother of a 2-year-old boy. She already had visible physical symptoms and her hands were already deformed. I asked her, have you been receiving the treatment? She said, ‘No, I don’t go to the health center anymore because the staff there say I can infect them’.  So I told her, you have to be tested before anyone can say you are infective. But in my mind, I thought, so this is what is the progress we have had: we have done advocacy, awareness generation  – everything and yet the staff here are not willing to go near the patients.

That’s when I learnt that there had not been any amendment or reviews of the previous policies. I also asked myself, why is the budget for leprosy so low? And I came to think that there maybe also lapses in our government, maybe leprosy is not  a priority for  our government. Maybe they think that there isn’t a Hansen’s disease here in the Philippines anymore.

IPS: You had left the government job to work with the non governmental organisations, such as USAID, EU, Save the Children, among others. But you returned in 2016. How are you working differently this time?

MFL: When I was offered the position of the Assistant Secretary–which is a part of the Executive Committee (a high level decision-making group)–I thought that I could now make actual impact by discussing an issue with my fellow committee members and making constructive recommendations for deciding on a new policy. For example, while working for the non-government organisations, I discovered that we are making policies without any inclusion of inputs from local level, from the communities. And that is something I can now raise this issue to the national government.

IPS: What changes do you expect to see in next five years?

MFL: I have been talking to the sanatoriums in the Philippines. They have many in-house lepers who are not active anymore, they are just living in the sanatoriums compounds. What we did was turning some parts of the sanatoriums into general hospitals. We can fund the hospitals with facilities and equipment, so that outside patients can go in for treatment and the in-house patients can continue to get treated, but the outsiders will know that they are not active anymore. This will augment financial resources.

So, right now I am telling the sanatoriums that let us develop the standards based on the facilities , equipment and the human resources that they need. Once we have this standard, we can propose to the government for a specific, yearly budget  allocation for the leprosy programme.

IPS: You are very vocal about social inclusion of the affected people and their families. How can this be achieved ?

MFL: A great way to do this is to take a holistic approach by providing the affected people opportunities to education, employments, training etc. For example, in Culion, I met a leprosy affected family whose daughter wanted to go to college and become a nurse. So I said, maybe we can ask the governor of the state to provide her a scholarship. Now, if such a child is brought to a college and given the opportunity to study, she can interact with a hundred others there and inform them about her family, their life. People around her can understand that she is not infective – this way a new level of engagement can begin.