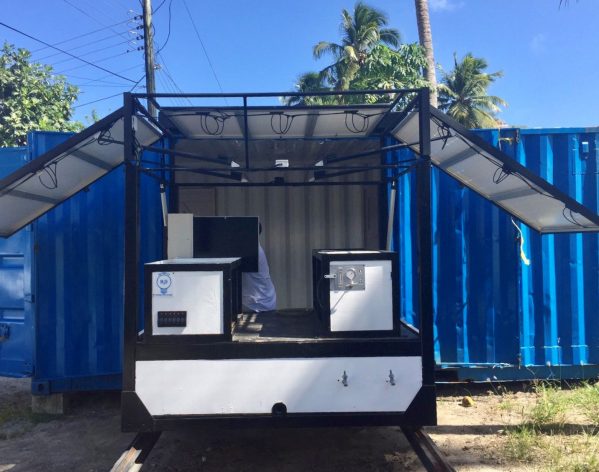 CASTRIES , Mar 11 2019 (IPS) - Karlis Noel spends his days in his lab in the small, picturesque community of Laborie in St. Lucia. The former fisherman’s story might sound like an overnight success, but his present accolades in the field of engineering are the result of years of hard work and an unceasing drive to make life easier for communities in the throes of a water crisis.

Noel was not able to complete secondary school, but he never allowed that to interfere with his thirst for knowledge. The self-taught inventor, with a knack for engineering, is receiving acclaim for building the Eastern Caribbean’s first solar-powered, mobile desalination plant. With a grant from the Global Environment Facility Small Grants Program (GEF-SGP) to the Laborie Fishers and Consumers Cooperative Project, Noel was able to build the facility, which can produce 1,000 gallons of water daily.

The facility is a marvel to behold. It is located near the ocean, opens up ‘transformers-style’ to get the desalination process going andif there is a storm, it can be folded up, taken away and stored in a safe place until the all-clear is given.

In 2018, Noel built a second generation desalination facility for the Government of Nauru in the Pacific, a country beset with problems sourcing potable water. His determination to help solve the water crises was recently recognised by the Government of St. Lucia. Noel received the Saint Lucia Les Pitons Medal (Gold) for having performed long and meritorious service in the field of entrepreneurship and community development.

IPS spoke to Noel from his lab about his plans for the future, the destination for his next solar-powered mobile desalination unit and why he always has Dominica in mind when hammering away on his units. Excerpts of the interview follow:

Inter Press Service (IPS): Your solar-powered, mobile desalination unit is creating waves and has made it across the world to help the country of Nauru deal with its water crisis. Did you ever think that your invention would one day help nations?

Karlis Noel (KN): I knew it was going to make waves, but what surprised me was the short space of time it took to gain such wide appeal, after the very first video of the facility hit social media. It’s such a good feeling to help a country that needs potable water. I didn’t do it with money in mind, I wanted to help, to make a difference. Just knowing that I can assist in this way is an accomplishment for me.

IPS: Walk me through the process. How exactly does the system work? What sets it apart from other desalination facilities?

KN: Desalination in itself is not new. Reverse osmosis is not new. It is mature technology. What makes this system different is that it is fully mobile and solar powered and there is no brine discharged into the sea. There is a waste management system.

The other thing is that the latest system I developed works on a very broad spectrum. So it can purify anything from fresh water to highly saline water, making it possible to use it by the sea or the river or any source of contaminated water. That’s what makes it unique.

IPS: Tell me about the original problem that your community of Laborie faced, which gave rise to this invention?

KN: Strangely, during droughts we have no water, but one would think that when it rains we actually have a lot of water, but this is not the case. When it rains, the water company has to shut down the system due to debris etc, so we have a situation where when there’s drought we are without and when it rains we are also without water.

IPS: Can this facility help other communities facing water crises?

KN: Definitely, but there is also an issue that I have noted from my research work with farmers. The sea water levels are rising and this means that salt water is entering our rivers at a faster rate. The farmers in some communities (for example Roseau in St. Lucia) are faced with a serious problem as they can no longer irrigate their crops with water from the river. Farmers in the community of Black Bay (south of St. Lucia) are facing a similar problem. We are now getting salt water, two miles into the river. So this presents another aspect of the water scarcity issue, with salt water taking over our rivers. Eventually these communities will need a machine like this to ensure there is fresh water to irrigate fields.

IPS: How do you see it helping post disaster in our region?

KN: This is the bigger goal of this project. What I’m trying to do right now is shrink the facility. If I can make it both smaller and more efficient, for example being able to get 10,000 or 20,000 gallons of fresh water a day from a much smaller unit, this would be ideal.

It means it can be easily deployed post-disaster. This is important to me because we are going to get more severe storms. It will be necessary to have smaller, more affordable systems with higher output.

My dream is to design a unit that can fit in the back of a car, easily put on board a helicopter, for easy transportation to any community or country that needs it.

For some reason, when I’m designing, I have Dominica in mind. I know what that country went through following the devastation of Hurricane Maria and I want to ensure that I can do my part to help any sister island in their time of need.