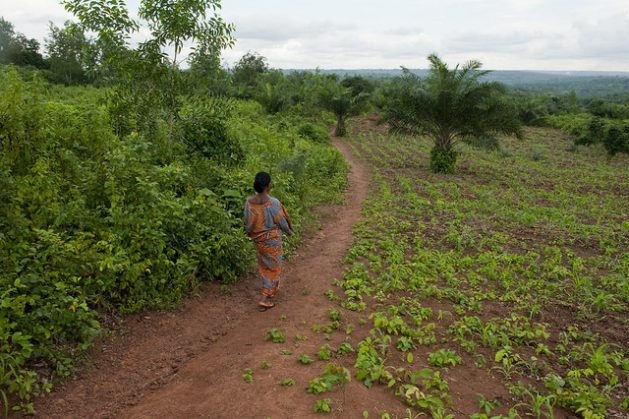 Felicienne Soton is part of a women's group that produces gari (cassawa flour). She and her group in Adjegounle village have greatly benefited from Benin's national CDD project. (Photo: Arne Hoel).

COTONOU, Benin, Apr 30 2019 (IPS) - Théophile Houssou, a maize farmer from Cotonou, has spent sleepless nights lying awake worrying about the various disasters that could befall any farmer, often wondering, “What if it rains heavily and all my crops are washed away?” or “What if the armyworms invade my farm and eat up all the crops and I’m left with nothing?”

Maize crops in Benin, like in at least 28 other African countries, are being threatened by the Fall Armyworm (FAW), an invasive crop pest that feeds on 80 different crop species. Houssou is thankful to have missed an infestation and gives thanks to “God for the good season, but it was not easy,” he tells IPS.

Maize production in Benin reached a record 1.6 million tons during the 2017-2018 season, compared to 1.2 million tons two years ago, according to the ministry of agriculture’s figures.

In downtown Cotonou, the country’s commercial capital, five men are busy loading pineapples onto a 10-ton truck, while four more heavy vehicles wait to be loaded. The produce will be taken to several countries in the region, including Nigeria, which receives 80 percent of all Benin’s exports. Benin is Africa’s fourth-largest pineapple exporter, producing between 400,000 and 450,000 tons of pineapple annually. Exports to the European Union (EU) increased from 500 tons to 4,000 tons between 2000 and 2014, according to official figures.

Further away, the famous Dantokpa Market is flooded with agricultural products, including red tomatoes, okra, soya beans, mangoes, orange, green pepper, lemon and all sorts of spinaches and fruits. Competition is fierce and the selling price is very low, amid an excellent agricultural season.

Room for improvement
While the agricultural sector here may look lively, it boasts several fault lines.

Despite being mostly a subsistence sector, agriculture contributes about 34 percent to this West African nation’s Gross Domestic Product (GDP). Almost 80 percent of Benin’s 11.2 million people earn a living from agriculture, the Food and Agricultural Organisation of the United Nations (FAO) says. FAO adds that the country’s farmers face challenges such as include poor infrastructure and flooding, which can wipe out harvests and seed stocks.

In a document titled “Strategic Plan for Agricultural Sector Development (PSDSA) 2025 and National Plan for Agricultural Investments and Food Security and Nutrition (PNIASAN) 2017 -2021”, the Benin government has admitted that the agriculture sector’s revenues and productivity are low, and the labour force is only partially rewarded, making agricultural products less competitive.

“Most farmers have very little use of improved inputs and engage in mining practices that accentuate the degradation of natural resources,” the document states.

“We can do better than this,” Marthe Dossou, a small scale farmer supervising the offloading of thousands of boxes of red tomatoes from a rundown truck, tells IPS. These tomatoes will be exported to Nigeria but Dossou feels that considering the high quality of the harvest, Benin can produce more for export. “If we can be given a helping hand like more resources, including loans, new farming methods and how to master water control techniques,” she says.

Dr Tamo Manuele, the International Institute for Tropical Agriculture (IITA) Benin country representative, tells IPS that agricultural innovation “is key to eradicating poverty, hunger and malnutrition, mainly in rural areas where most of the world’s poorest live.”
“Innovation can, first of all, increase small-scale farmers’ productivity and income, and secondly diversify farmers’ income through value chain development; and lastly create more and better opportunities for the rural poor,” he says.

“Farmers or at least actors in agricultural value chains need support for conservation and processing of agricultural commodities. With e-agriculture, farmers can better manage their production and especially be informed of market opportunities. Innovations such as warrantage system [an inventory credit system where farmers instead of selling their produce use it as collateral to get credit from a bank] and group selling can help solving this problem. NGOs and specialised experts in agriculture have to strengthen and support closely farmers,” Manuele urges.

Headquartered in Ibadan, Nigeria, the IITA has been present in Benin since 1985 and it supports national agricultural research and extension services.

“Research is one of the main links leading to innovation. Many studies have reported that communities living near the research centre are more informed, exposed to the innovations and more supervised by scientists. Therefore, their willingness to adopt innovation is very significant. So IITA-Benin is more present on fields through several on-farm-innovation testing managed by scientists,” Manuele says. 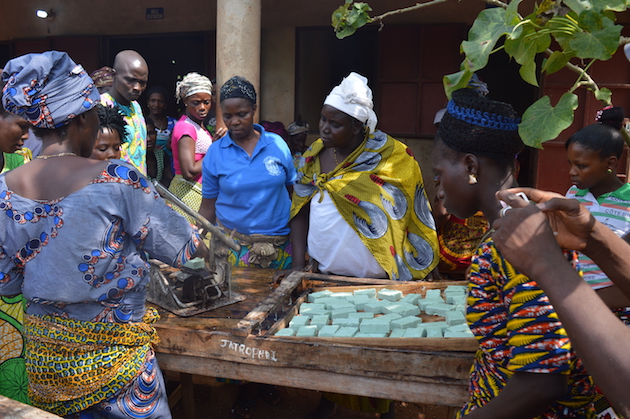 IITA launched a jatropha-based biofuel project in 2015 in Benin. This involved the development of a biofuel chain to create profitable and viable small businesses. These women make soap from the jatropha tree. Courtesy: International Institute for Tropical Agriculture (IITA)

Some farmers say they are aware of agricultural technologies, but complain about the lack of promotion of such innovations in the areas where they operate.
Koffi Akpovi Justin, a seasonal farmer, was introduced to the 4R method, where four scientific principles are used to ensure that the soil has the right levels of nutrients for planting.

“Everybody brags about how fertile the African land is…I used to be frustrated and almost gave up on farming because I strongly believed in the natural way of doing things. I would just labour the land, plant seeds (plenty of them) and start the painful process of watering it, and at the end I got mitigated results. But not anymore.”

But Sub-Saharan Africa is the world’s most expensive fertiliser market, where small scale farmers make up about 70 percent of the population. “If you will use it, use it carefully because not practicing the 4R method could see some of it spill all over the fields and pollute nearby water resources and groundwater. I experienced it many years ago, but now I’m wiser.”

He adds that many farmers who live in remote areas are unable to access information about agricultural innovation. “Many of them, who operate mostly in very remote places, always say ‘We know that these things exist and we would like to use it but where can we find it?’ Maybe the international organisations, like the UN and the IITA, could do more to make sure that as many farmers as possible get access to agricultural innovations to boost food production and fight hunger.”

Monique Soton is one such farmer. She lives in north-western Benin, about 500 km from Cotonou, the country’s commercial capital.

“We operate in remote areas and there our lives are concentrated only about leaving in the morning to work on the land and come back in the evening. There is no radio, no TV, no electricity. We may miss out on important information about new methods of farming or new developments going on in the sector, like if a census were to be held to determine the number of farmers who need financial support. It’s sad,” the tomato farmer tells IPS.

Another major obstacle facing small scale farmers in Benin is also the lack of market. “The only local market I use to sell my products is Dantokpa in Cotonou. Just imagine the distance from our area [about 500 km from Cotonou] to the commercial capital,” Soton says, adding that there aren’t adequate roads or vehicles to get the produce to the marketplace.
“There were many times the rundown vehicle we were using to transport our products broke down in the middle of a no man’s land at night and that’s very scary.”

Agricultural innovation
The IITA has been reaching out to various communities. In Benin it launched a jatropha-based biofuel project in 2015. This involved the development of a biofuel chain to create profitable and viable small businesses.

“Specifically, it is consolidating the profitability and sustainability of jatropha value chains through a public-private partnership approach that creates jobs for young people, women and men. The project is set up according to the value chain approach including jatropha production, jatropha oil extraction, soap making, grain milling and rural electrification, among others,” Manuele explains.

Since the start of the project some 2,050 producers, including 538 women, have benefitted.

Apart from this jatropha project, the IITA said that it has implemented several other projects that contribute to the food and nutrition security and income improvement of many rural households.

Magic solution?
While innovations in agriculture have proved successful, Dr Jeroen Huising, a soil scientist based in Nigeria, cautions that this is not the ‘magic bullet’ for Benin. “I do not believe in magic solutions and agricultural (innovation) is certainly not magic. The question about the rural poor has little to do with the agricultural innovations. There are economic factors that determine that,” he tells IPS.

“Also, if the ‘innovations’ would increase yield for the smallholder farmers, it would not solve their problems. The production has to do primarily with use of inputs and even then the prices are often too low to make a decent living.”

Soton agrees that economic factors pay a huge role in being a successful smallholder, explaining that “the lack of financial support is a serious problem.”

She says that banks do even consider small holder farmers for loans “because we don’t fulfil not even one of their requirements needed to lend us money. So, we invest our money we get from the tontines [an investment plan] and from selling some of our properties.”

“We have the land but we lack everything from seeds to fertilisers and cash to hire labourers.”