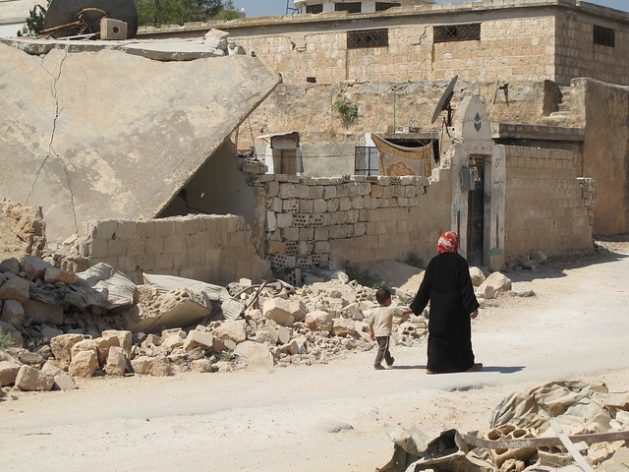 Syrian mother and child near Ma'arat Al-Numan, in a photo dated 2013. A collapse in waste management services, often disrupted due to fighting, can also lead to contamination and health risks, posing a challenge not only for civilians still living in Syria but also for those who wish to return. Credit: Shelly Kittleson/IPS

UNITED NATIONS, May 24 2019 (IPS) - Despite the United Nations Security Council’s task of protecting civilians, millions around the world are still being displaced and killed with little to no accountability for perpetrators.

Marking 20 years since the UN Security Council included the protection of civilians in its agenda, the group convened for an open debate on the subject.

While there has been some progress, the global picture remains dire as civilians continue bear the brunt of the cost of war.

“Grave human suffering is still being caused by armed conflicts and lack of compliance with international humanitarian law…we have the rules and laws of war. We all now need to work to enhance compliance,” said Secretary-General Antonio Guterres to the council.

Ahead of the meeting, Amnesty International’s Crisis Response Director Tirana Hassan urged the Security Council to end its “catastrophic failure,” stating: “World leaders have all but abandoned civilians to the ravages of war. This week’s open debate in the Security Council must yield more than just posturing and empty promises. Concrete action is needed to reverse course, effectively protect civilians, stop war crimes and end impunity.”

According to the UN, more than 22,800 civilians were killed or injured in 2018 alone across just six countries: Afghanistan, Iraq, Mali, Somalia, South Sudan, and Yemen.

All five permanent Security Council members are parties to many of these conflicts, and are thus responsible for the failure to protect civilians.

For instance, the United States-led coalition killed more than 1,600 civilians in the Syrian city of Raqqa over four months in 2017.

The Saudi-led coalition, supported by Western arms from the United States, United Kingdom, and France, have also injured and killed thousands of civilians and deliberately blocked food assistance in Yemen, contributing to one of the world’s worst humanitarian crises.

The UN Secretary-General particularly pointed to the indiscriminate use of explosive weapons in populated areas and its devastating impact as 90 percent of those killed and injured are civilians.

Many of those civilians are too often children.

“The great military powers cynically boast about ‘precision’ warfare and ‘surgical’ strikes that distinguish between fighters and civilians. But the reality on the ground is that civilians are routinely targeted where they live, work, study, worship and seek medical care. Parties to armed conflict unlawfully kill, maim and forcibly displace millions of civilians while world leaders shirk their responsibility and turn their backs on war crimes and immense suffering,” Hassan said.

Beyond the deaths and injuries of civilians, the President of the International Committee of the Red Cross Peter Maurer noted the long-term impacts of such conflict on communities, stating: “We see damaged infrastructure leading to the collapse of essential health, water systems, and more. It is not only civilian infrastructure that is harmed – the environmental consequences of conflict are often overlooked. This includes vital natural resources which, if damaged can have implications not only for the survival of civilian populations but also for environmental risks.”

Since September 2014, a coalition led by the U.S. has conducted air strikes targeting many oil installations in Syria.

A collapse in waste management services, often disrupted due to fighting, can also lead to contamination and health risks, posing a challenge not only for civilians still living in Syria but also for those who wish to return.

Maurer highlighted the need for the Security Council to protect displaced communities or at the very least to let them protect themselves.

“Too often do we see that in addition to being exposed to war and violence, populations are stopped from reaching safer spaces, are constrained by bureaucratic obstacles and are limited in their free movement,” he said.

Guterres pointed to the need to enhance compliance with international humanitarian law as well as greater and more even progress on accountability.

“For the Security Council, this means being more consistent in how it addresses protection concerns within and across different conflicts, and being more comprehensive in terms of, for example, grappling with the protection challenges of urban warfare. And it means keeping today’s conversation going,” he told the council.

Such decisions are crucial for the peace, security, and protection of civilians worldwide.

“These decisions can save lives or end them; they can create hope or misery; and they can bolster or break the norms that protect universal humanitarian laws and principles…not only are the decisions of all UN Member States and especially the Security Council important, the absence of decisions by the Council also takes its toll on civilians,” Maurer said.