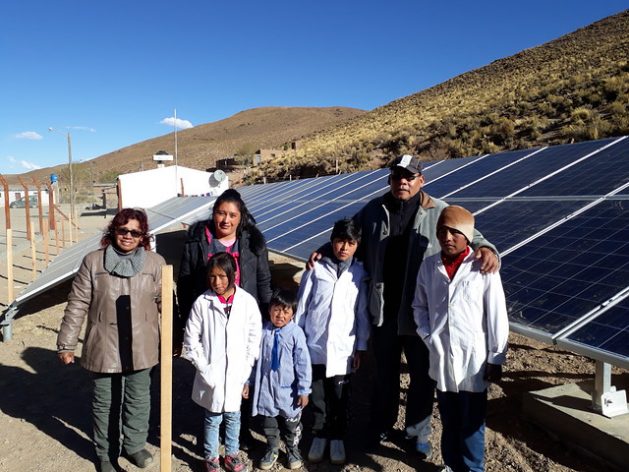 Residents of San Francisco, a community of just 54 people in Argentina's Puna region, stand next to solar panels that began to operate in early October, supplying all their electricity and providing them with street lighting for the first time. It is the fourth completely solar town in the province of Jujuy, on the border with Bolivia and Chile. Credit: Daniel Gutman/IPS

SANTA CATALINA/SUSQUES, Argentina, Oct 22 2019 (IPS) - “On moonless nights it was very difficult to walk around this town,” says Celia Vilte, a teacher from San Francisco, a highlands village of just 54 people in the extreme northwest of Argentina whose centre is not a town square but 40 solar panels, which provide one hundred percent of its electricity.

To get to San Francisco from La Quiaca, a city on the border with Bolivia, you have to drive about two hours along the desolate dirt roads of the Puna, a highlands ecosystem of yellow grass where no trees grow and where the rivers run dry most of the year.

But since early October it is no longer necessary to arrive by day to see the village from afar, because now San Francisco has LED street lighting which, thanks to renewable energy, lights up the adobe buildings at night in this village located at 3800 metres altitude in the municipality of Santa Catalina.

“We were used to candles and lanterns. Because I get scared, I didn’t go out at night,” says Vilte, who has been a teacher for 20 years in the primary school which now has 13 students.

Seven of the schoolchildren walk two to three hours every Monday from their homes in the countryside, stay in the village all week, and leave on Fridays to spend the weekends with their families.

In the Puna highlands, most of the inhabitants are indigenous people from the Kolla community, linked to the Incas in ancient times, who raise llamas and sheep and practice subsistence farming – quite a feat in such an arid landscape.

Cloudy days are rare here. The sun beats down without mercy, weathering the skin and leaving lips parched. But the relentless sunlight is also an extraordinary source of energy. 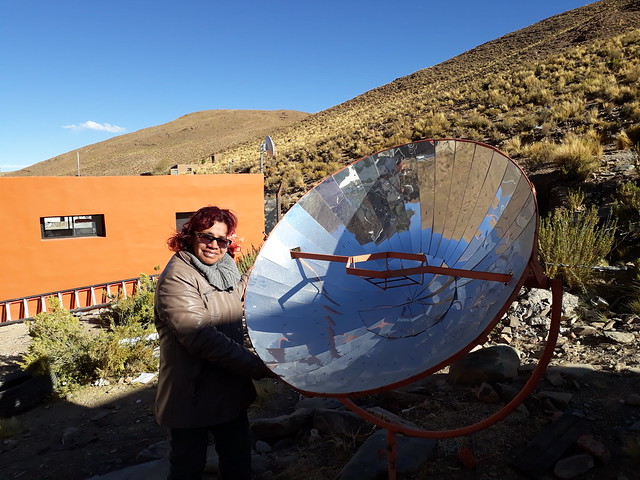 Celia Vilte, a teacher in San Francisco, stands next to one of the two solar cookers located in the center of town, where families place pots to boil water using renewable energy. The high plateaus of the Puna, an ecosystem that Argentina shares with Chile, Bolivia and Peru, have excellent solar radiation conditions. Credit: Daniel Gutman/IPS

The high plateau grasslands of the Puna ecosystem have the best solar radiation in Latin America, according to the U.S. Department of Energy’s National Renewable Energy Laboratory (NREL).

Keen on tapping into that potential, the government of the province of Jujuy, where Santa Catalina is located, launched in early 2019 the Solar Villages programme, which installs solar panels and lithium batteries that become the sole source of electricity, 24 hours a day.

For now the programme covers nine villages in the Puna region, home to a combined total of 1000 people, although the provincial government plans to expand the number in the future.

The solar panels in three of the villages have been officially inaugurated and the fourth is San Francisco, where the panels were connected in early October. The official inauguration ceremony will be on Oct. 23, attended by the highest provincial authorities.

The new source of energy has changed the lives of the local inhabitants in more ways than one. The local guru in agricultural techniques, Juan Alberto Sardina, joked that “Now there’s too much light. Many of us are wondering how we’re going to hide now.” 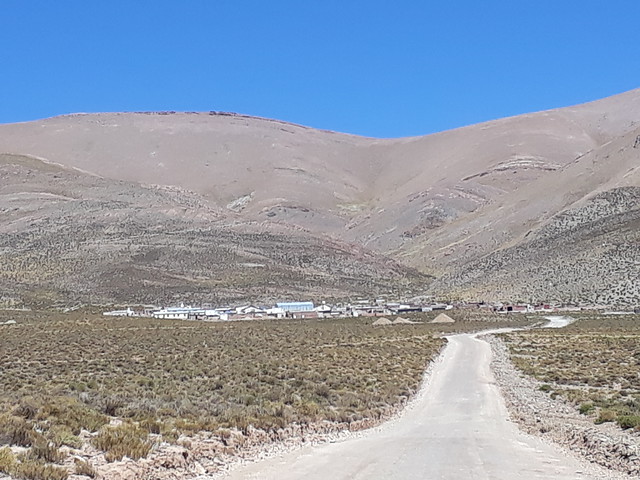 View of the village of Olaroz, at an altitude of 4000 metres, with the Andes foothills in the background. Across from this town in Argentina’s Puna region is the Olaroz salt flat, where foreign companies extract lithium. However, the lithium batteries that today store the town’s solar energy are imported. Credit: Daniel Gutman/IPS

Along with the panels, there are two communal solar cookers consisting of concave plates with a support to hold pots, which are moved to point towards the sun by the people who use them, to heat water mainly. Most households continue to cook with wood from local shrubs, which is consumed quickly.

Ernesto Garcia, head of operations at the Empresa Jujeña de Energía (Ejesa), the electric power utility in the province, explained that “Jujuy has an area of valleys, where San Salvador, the capital, is the most developed part and is supplied with electricity from the national grid.”

“And in La Quiaca there is a thermal power plant that provides electricity to a number of towns. But in the north and west, on the borders with Bolivia and Chile, we have communities that, because of the complicated geography and the large distances, we consider to be isolated in terms of electricity,” he added, as he accompanied IPS on a tour through the solar towns of the Puna region.

Most of these villages had in recent years been supplied with thermal generators, which have polluted the environment and have provided electric power with restrictions.

Today, the so-called solar villages have lithium batteries to store energy, which provide the local inhabitants with 24-hour electricity. 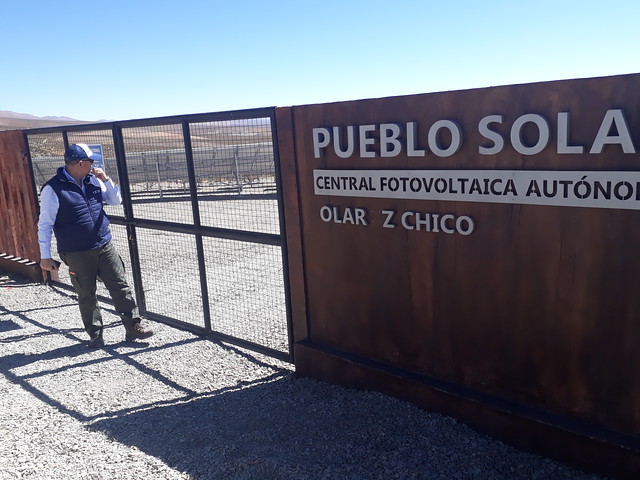 Ernesto García, head of operations at the Empresa Jujeña de Energía (Ejesa) provincial power utility, stands at the entrance to the Olaroz solar power plant. In January Olaroz became the first solar town in the province of Jujuy, in the far northwest of Argentina, where the provincial government aims to harness the abundant solar radiation in the Puna altiplano region. Credit: Daniel Gutman/IPS

The first of these solar villages, inaugurated in January, was Olaroz, population 300, which is in Susques department in the southwest of Jujuy, less than 100 km from the Jama Pass, which crosses the Andes mountains into Chile.

In the centre of the village there is still a small green sheet metal hut, with a gable roof, which used to house the diesel-fueled electric generator.

Across from the hut is the primary school, which for years suffered the environmental impact of the fumes.

“The generator ran all day long and filled our classrooms with smoke. And at night there were frequent power outages. If we plugged in an electric heater, sometimes the system couldn’t handle it,” local teacher Martires Llanes told IPS.

Ejesa has promised to dismantle the hut next year and clean up the pollution left by the oil and diesel fuel.

“Wherever we are installing solar energy and removing thermal generators, we have made a commitment to clean up the land. Now we not only have better energy, but also cleaner energy,” García said.

The Olaroz solar power plant, which is next to the town, is much larger than the one in San Francisco, located about five hours away along unpaved roads. It has 430 panels, as well as lithium batteries.

Behind Olaroz are the foothills of the Andes mountains, and in front of the town, a few kilometres away, you can see a large white desert, one of the salt flats that add to the monotony of the Puna. 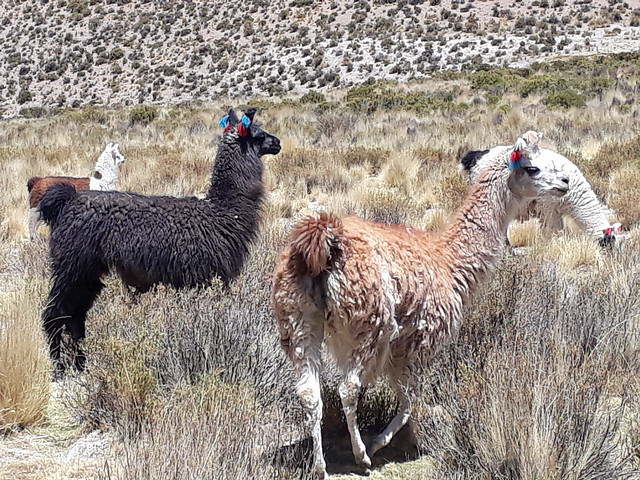 Llamas graze in Argentina’s Puna region, where most of the inhabitants are members of the Kolla indigenous community, who breed llamas and sheep and are subsistence farmers, growing only a few crops such as potatoes and beans, due to the arid conditions. Credit: Daniel Gutman

Lithium has been extracted from the Olaroz salt flats since 2014 by the company Sales de Jujuy, a partnership between Japan’s Toyota, Australia’s Orocobre and the provincial government. The company Exar, made up of Canada’s Lithium Americas and China’s Ganfeng, also began to extract lithium there.

The Argentine government has said it is counting on the foreign exchange earnings from lithium – a mineral in growing demand because it is also used in the batteries of electric vehicles – to finance the development of the country, which is currently in the grip of a spiraling economic crisis.

However, Argentina’s role as a primary producer, in the shadow of industrialised countries, is crudely highlighted in Olaroz, where the batteries that store the energy from the solar park, located across from a sea of lithium, are imported from China, just like the solar panels.

The main thing, however, is that solar energy has improved the life of the community.

“Round-the-clock electricity is a dream come true. For years we had electricity only from 9:00 to 12:00 in the morning, and from 7:30 to 12:00 at night,” said Mirta Irades, principal of the primary school, which is attended by 64 children.

In Olaroz, she told IPS, winters are often harsh. Temperatures can drop as low as minus 20 degrees Celsius, which is why the school year runs from September to June – during the southern hemisphere spring, summer and fall – unlike other schools in Argentina, which are open from fall to spring and close in the summertime.

“In winter, a drop of water freezes before it hits the ground,” Irades said with a smile of resignation.

The shrubby vegetation of the Puna is a poor source of heating fuel, and heating in Olaroz has depended for years on trucks that bring in firewood, provided by the provincial government.

But next winter, starting in June 2020, people in Olaroz will have electric heaters in their homes for the first time, thanks to solar energy.