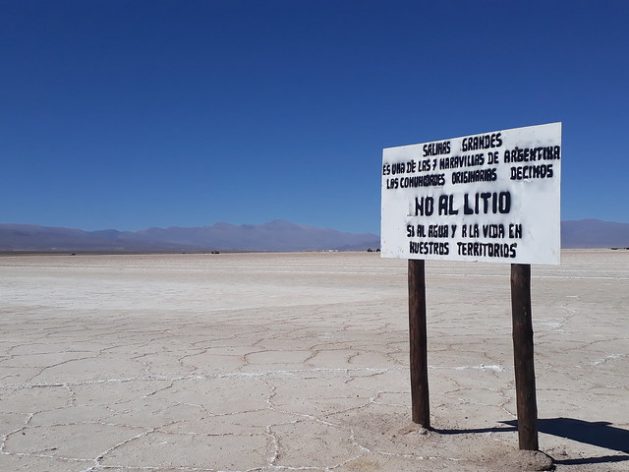 "No to lithium" reads a sign erected in Salinas Grandes by local indigenous communities, who depend on the salt flats for tourism and to harvest salt, in the northwest of Argentina. In February 2019 they blocked the nearest highway, which runs to Chile, for nearly two weeks, halting exploration for lithium by a mining company. Credit: Daniel Gutman/IPS

OLAROZ, Argentina , Dec 18 2019 (IPS) - The intense white brightness of the salt flats interrupts the arid monotony of the Puna in northwest Argentina, resembling postcards from the moon. Beneath its surface are concealed the world’s largest reserves of lithium, the key mineral in the transition to clean energy, the mining of which has triggered controversy.

The debate is not only about the environmental impact but also about how real are the benefits for the local communities of this region located more than 4,000 metres above sea level, where people unaccustomed to the Andes highlands have a hard time breathing.

“I have no doubt that our province is destined to play a key role in the coming years, which will be marked by the abandonment of fossil fuels,” Carlos Oehler, president of the Jujuy Energy and Mining State Society (Jemse), told IPS.

“It’s an opportunity for development. And the people who only emphasise the environmental impact do so out of ignorance,” he argued, at the company’s headquarters in Salvador, the capital of the province of Jujuy.

Jemse, which is owned by the province – bordering Bolivia and Chile – has been producing lithium since 2014 in the Olaroz salt flats, through Sales de Jujuy, a public-private partnership with Australia’s Orocobre and Japan’s Toyota Tsusho.

The participation of Toyota Tsusho – part of the Toyota conglomerate – is a reflection of the international interest in lithium for the production of batteries for electric vehicles, a market expected to boom in the coming years in industrialised countries.

The impact of lithium mining in the Puna region of Jujuy is limited for now and differs depending on the area, IPS saw first-hand during a several-day tour through the scattered towns and villages of this rugged Andes plateau region.

Several of these communities, mostly populated by indigenous Kolla people, became Solar Villages this year – a provincial project that harnesses the abundant sunlight of the Puna region to bring electricity to remote villages.

A few km from the Salar de Olaroz salt flats is the village of the same name, made up of a few dozen adobe houses and reached by a desolate dirt road. 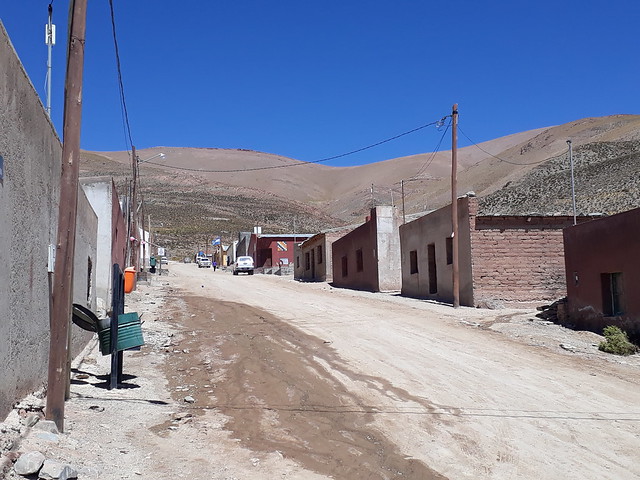 A street in Olaroz, the village near the salt flats of the same name in the northwest Argentine province of Jujuy, where lithium mining provides stable work for some of the local inhabitants, in an area where communities have traditionally raised llamas and sheep for a living. Credit: Daniel Gutman/IPS

Last year, the town’s first secondary school opened its doors. It is a vocational-technical institution with an orientation in chemistry, which aims precisely to train young people about lithium.

In addition, lithium has brought stable jobs to a poor region, where a majority of the population depends on llama and sheep farming. Mirta Irades, principal of the Olaroz primary school, told IPS: “Everyone here wants to work at the mining company, even if it’s just washing the dishes.”

The real benefits, however, are modest. According to a report presented by the national and provincial governments in November, only 162 people, or 42 percent of those working in the Sales de Jujuy company, come from local communities.

In total, the document says, direct mining employment in Jujuy increased from 1,287 jobs in 2006 to 2,244 in 2018, with lithium mining accounting for three-quarters of the growth. That is just 3.5 percent of registered employment in the province, although wages are more than double the overall average.

The timeframes involved in lithium production are another hurdle.

Sales de Jujuy is the only company in the province that is commercially mining lithium. There are dozens of other companies working, but exploration, pilot tests, the installation of processing plants and other previous tasks can take up to 10 years. 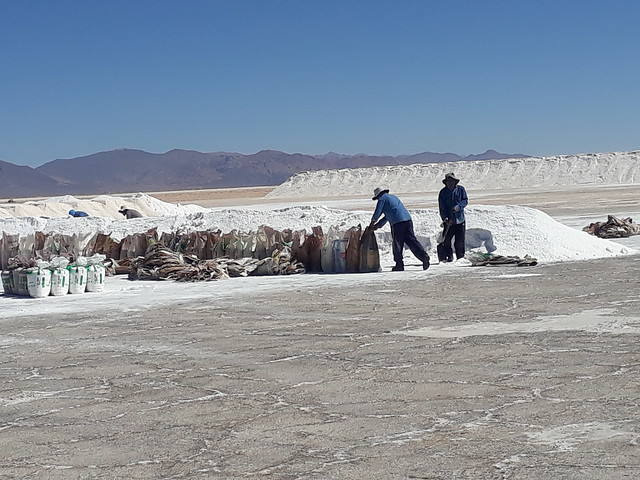 Two men from indigenous communities near Salinas Grandes pick up bags of salt harvested by members of the local cooperative. Villages around Salinas Grandes have blocked attempts to mine lithium in the area. Credit: Daniel Gutman/IPS

There is only one other company already mining lithium in the entire northwest of Argentina, which is also made up of the provinces of Salta and Catamarca.

This is the area that, along with northern Chile and southern Bolivia, comprises the so-called Lithium Triangle, which concentrates 67 percent of the world’s proven reserves of the mineral, with Argentina at the head, according to data from the U.S. Geological Survey.

But those who are skeptical about lithium’s potential for the region point out that South American countries are once again falling into the role of mere producers of primary products, as in the case of agricultural and livestock exports.

This is crudely reflected in Olaroz, one of the Solar Villages that is supplied with electricity by a small local solar park, which like the others in the programme runs 24 hours a day thanks to lithium batteries.

But the batteries are imported from China, since neither Argentina nor the rest of South America has the technology to manufacture them.

When you walk through communities in Jujuy’s Puna region, there are places where people don’t even want to hear lithium mentioned.

In Salinas Grandes, another giant white sea of salt, located about 100 km from Olaroz, no mining company has been able to gain a foothold due to opposition from the 33 indigenous communities in the area. 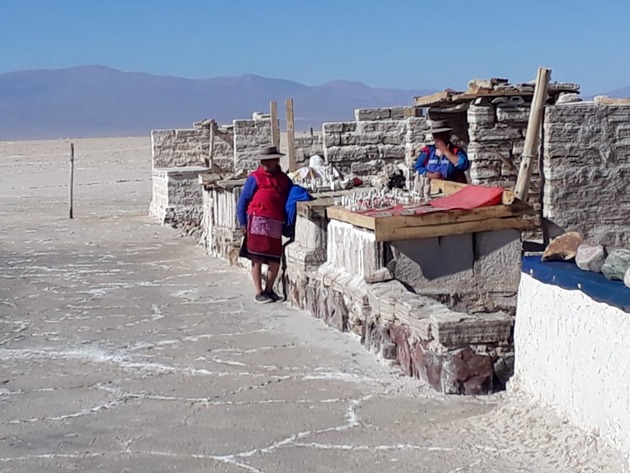 Two indigenous women wait for customers at a craft stand in Salinas Grandes, in the Puna highlands region in northwestern Argentina. The tourist routes through the immense salt flats that break up the arid landscape here are an alternative created by the local indigenous communities to boost their income. Credit: Daniel Gutman/IPS

“This is our territory, we decided that lithium will not be mined here, and they are going to have to respect us,” Verónica Chávez told IPS, while participating in an assembly of some 100 members of indigenous communities in the middle of the salt flats.

Chávez lives in the village of Santuario Tres Pozos, home to some 30 families, and she is a member of the local cooperative that brings together indigenous families who work harvesting salt, using the same techniques their ancestors used for centuries.

“All the promises they make to us with the arrival of the lithium companies are lies. Lithium is food for today and hunger for tomorrow,” adds Chávez.

Four years ago the communities in Salinas Grandes embarked on another activity: guided tours and the sale of handicrafts to Argentine and foreign tourists attracted by the seemingly endless white landscape that glitters in the sunlight.

Alicia Chalabe, a lawyer for the indigenous populations of Salinas Grandes, says no economic offer will manage to modify the situation. “The communities live close to the salt flats and use the territory, which for them has a very important historical, cultural and patrimonial value,” she told IPS.

“In the Olaroz area, the situation is different because the communities never used the salt flats,” she adds. 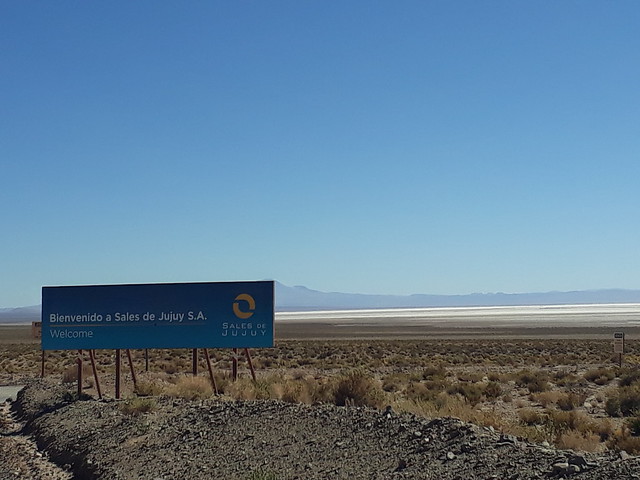 A sign marks the entrance to Sales de Jujuy, one of the only two companies that mines and sells lithium in Argentina, the country with the largest proven reserves. It operates in the Olaroz salt flats and is made up of the Australian company Orocobre, Japan’s Toyota and a public enterprise from the province of Jujuy, in the northwest of Argentina. Credit Daniel Gutman/IPS

In February, the communities of Salinas Grandes staged a nearly two-week roadblock on national highway 52, which connects Argentina with Chile, successfully bringing to a halt the exploration work that a lithium mining company had begun in the area without the approval of the local indigenous population.

The resistance in Salinas Grandes is based in part on studies by Marcelo Sticco, a hydrogeologist at the University of Buenos Aires (UBA), who points out that lithium extraction puts community water sources at risk in a desert area where rain is a very sporadic luxury.

“The studies we carried out are conclusive,” Sticco told IPS from the Argentine capital. “Lithium is separated through the evaporation of enormous quantities of water, which fuels the salinisation of the groundwater used for consumption in the region.”

The government of Jujuy has a project to add value to lithium in the province: it partnered with the Italian electronics group SERI, which could locally install a battery assembly plant, with the aim of moving towards electric urban public transport.

This initiative, if implemented, could modify a scenario that for now does not offer significant concrete benefits, even though many in Argentina are already counting on the wealth that the so-called “white gold” will bring.

But although Argentina’s lithium exports have been growing, they reached just 251 million dollars in 2018, a mere 6.5 percent of the country’s mining exports.

However, Oehler, the president of Jemse, believes that the peak in international demand for lithium has not yet arrived: “It will peak between 2025 and 2030 and we have to take advantage of it to grow and to improve the lives of our communities,” he said.

But some experts fear the consequences of staking too much on this mineral, which could soon be outdated by a new technology that reduces or eliminates its current attraction.

Lithium has many uses, but it is most coveted as a heat conductor in rechargeable batteries.

These are used in cell phones, in the storage of different renewable energies, especially solar power, and in electric vehicles, the use of which is projected to steadily increase, especially in public transport, as they push aside fossil-fuel vehicles as part of the effort to curb global warming.