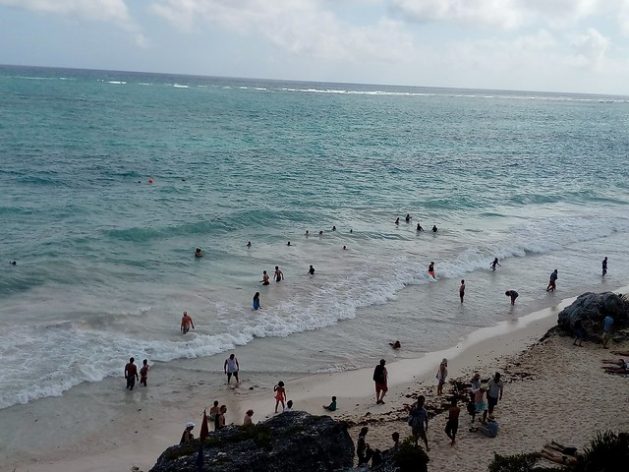 The Mayan Train, the flagship megaproject of leftist President Andrés Manuel López Obrador in Mexico, seeks to promote the socioeconomic development of the south and southeast of the country, with an emphasis on tourism and with the goal of transporting 50,000 passengers per day by 2023. The fear is that the mass influx of tourists will damage preserved coastal areas, such as Tulum beach in the state of Quintana Roo on the Yucatan Peninsula. CREDIT: Emilio Godoy

Mexico City, Aug 25 2020 (IPS) - Mayan anthropologist Ezer May fears that the tourism development and real estate construction boom that will be unleashed by the Mayan Train, the main infrastructure project of Mexican President Andrés Manuel López Obrador, will disrupt his community.

“What we think is that the east of the town could be affected,” May told IPS by phone from his hometown of Kimbilá.

“The most negative impact will come when they start building the development hub around the train station,” he said. “We know that the tourism industry and other businesses will receive a boost. There is uncertainty about what is to come; many ejidatarios [members of an ejido, public land held in common by the inhabitants of a village and farmed cooperatively or individually] don’t know what’s happening.”

This town of 4,000 people, whose name means “water by the tree”, is in the municipality of Izamal in the northern part of the state of Yucatan, about 1,350 km southeast of Mexico City. The district will have a Mayan Train station, although its size is not yet known, and the prospect awakens fears as well as hope among the communities involved.

In Kimbilá, 10 km from the city of Izamal, there are 560 ejidatarios who own some 5,000 hectares of land where they grow corn and vegetables, raise small livestock and produce honey.

“These ejido lands are going to be in the sights of tourism and real estate companies, real estate speculation and everything else that urban development implies. We will see the same old dispossession and asymmetrical agreements and contracts for buying up land at extremely low prices; we’ll see unequal treatment,” said May.

The government’s National Tourism Fund (Fonatur) is promoting the project, which is to cost between 6.2 and 7.8 billion dollars. Construction began in May.

The plan is for the Mayan Train to begin operating in 2022, with 19 stations and 12 other stops along some 1,400 km of track, which will be added to the nearly 27,000 km of railways in Mexico, Latin America’s second largest economy, population 129 million.

It will run through 78 municipalities in the southern and southeastern states of the country: Campeche, Quintana Roo, Yucatan, Chiapas and Tabasco, the first three of which are in the Yucatan Peninsula, which has one of the most important and fragile ecosystems in Mexico and is home to 11.1 million people.

Its locomotives will run on diesel and the trains are projected to carry about 50,000 passengers daily by 2023, reaching 221,000 by 2053, in addition to cargo such as transgenic soybeans, palm oil and pork, which are major agricultural products in the region. 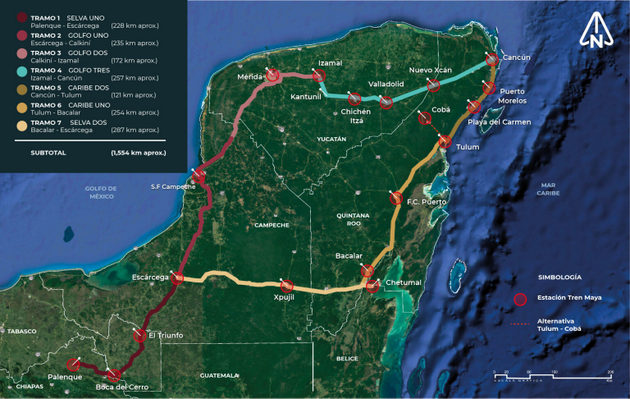 A map of the Mayan Train’s route through the Yucatan Peninsula in Mexico. Construction began in May and it is expected to begin operating in 2023. CREDIT: Fonatur

The Mexican government is promoting the megaproject as an engine for social development that will create jobs, boost tourism beyond the traditional attractions and energise the regional economy.

But it has unleashed controversy between those who back the administration’s propaganda and those who question the railway because of its potential environmental, social and cultural impacts, as well as the risk of fuelling illegal activities, such as human trafficking and drug smuggling.

The megaproject involves the construction of development hubs in the stations, which include businesses, drinking water, drainage, electricity and urban infrastructure, and which, according to the ministry of the environment itself, represent the greatest environmental threat posed by the railway.

U.N. Habitat, which offers technical advice on the project’s land-use planning aspects, estimates that the Mayan Train will create one million jobs by 2030 and lift 1.1 million people out of poverty, in an area that includes 42 municipalities with high poverty rates.

The region has become the country’s new energy frontier, with the construction of wind and solar parks, and agribusiness production such as transgenic soy and large pig farms. At the same time, it suffers from high levels of deforestation, fuelled by lumber extraction and agro-industry.

The environmental impact assessment itself and several independent scientific studies warn of the ecological damage that would be caused by the railway, which experts say the Mexican government does not seem willing to address.

The crux: the development model

Violeta Núñez, an academic at the public Autonomous Metropolitan University, told IPS that there is an internal contradiction within the government between those seeking a change in the socioeconomic conditions in the region and supporters of the real estate business.

“You have to ask yourself what kind of development you are pursuing and whether it is the best option,” she said. “The Mayan Train is aimed at profits and these stakeholders are not interested in people’s well-being, but in making money. What some indigenous organisations have said is that they never asked for a railway, and they feel that the project has been imposed on them.”

The railroad will cross ejido lands in five states where there are 5,386 ejidos totalling 12.5 million hectares. The ejidos would contribute the land and would be the main investors. To finance the stations, Fonatur has proposed three types of trusts that can be quoted on the Mexican stock market and that entail financial risks, such as the loss of the investment.

The undertaking was not suspended by the appearance of the COVID-19 pandemic in Mexico, as the government classified its construction as an “essential activity”. 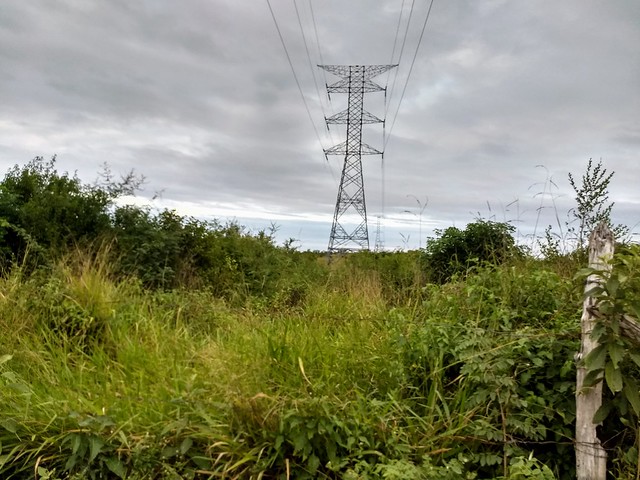 In Calakmul, in the southeastern state of Campeche, the Mayan Train will make use of the right-of-way that the Federal Electricity Commission has for its power lines. But on other stretches construction of the new 1,400-km railway will lead to the eviction of families. CREDIT: Emilio Godoy/IPS

To legitimise its construction, the leftwing López Obrador administration organised a consultation with indigenous communities through 30 regional assemblies, 15 informative and 15 consultative, held Nov. 29-30 and Dec. 14-15, 2019, respectively.

These assemblies were attended by 10,305 people from 1,078 indigenous communities in the five states, out of a potentially affected population of 1.5 million people, 150,000 of whom are indigenous.

But the consultation was carried out before the environmental impact assessment of the megaproject was even completed.

The Office of the United Nations High Commissioner for Human Rights in Mexico questioned whether this process met international standards, such as the provisions of International Labour Organisation Convention 169 on Indigenous and Tribal Peoples, to which the country is a party.

The railway will also displace an undetermined number of people, to make room for the tracks and stations, although U.N. Habitat insists that this will be “consensual”.

Fears of a new Cancún

The government argues that the project will not repeat the mistakes of mass tourism destinations, symbolised by Cancún, which wrought environmental havoc in that former Caribbean paradise in Quintana Roo. But its critics argue that the major beneficiaries appear to be the same big tourism, real estate and hotel chains, and that it will cause the same problems as a result of the heavy influx of visitors.

In Kimbilá, the local population already has firsthand experience of confrontations over megaprojects, such as a Spanish company’s attempt to build a wind farm, cancelled in 2016. But the difference is that now the opponent is much more powerful.

May said the railway “is an attempt to transform indigenous peoples and integrate them into the tourism-based economic model. They want us to imagine development from a global perspective, because it is a sign of socioeconomic progress. They believe that tourism is the source of progress, that cities bring development and that this is the best way to go.”

In Izamal, home to more than 26,800 people, construction of the development hub would require 853 hectares, 376 of which belong to ejidos.

Núñez warned of the disappearance of the campesino (peasant farmer) and indigenous way of life. “People have survived because of their relationship with the land and now this survival is being thrown into question and they are to become workers in the development hubs. This is not an option, if we are to defend the rural indigenous way of life,” she said.

The researcher suggested that an alternative would be the appropriation of the megaproject by the communities, in which “the ejidatarios themselves, in a joint association, present an alternative proposal other than the trusts on the stock market.”

The Mayan Train is a link in a plan that seeks to integrate the south and southeast of Mexico with Central America, starting with the government’s “Project for the territorial reordering of the south-southeast” and linked to the “Project for the integration and development of Mesoamerica”, which has been modified in appearance but not in substance since the beginning of the 21st century.

Its aim is to link that region to global markets and curb internal and external migration through the construction of megaprojects, the promotion of tourism and the services entailed.

In the 2000s, the government of the southern state of Chiapas fomented “Sustainable Rural Cities”, with aims similar to those of the Mayan Train, and experts argue that the failure of that project should be remembered.