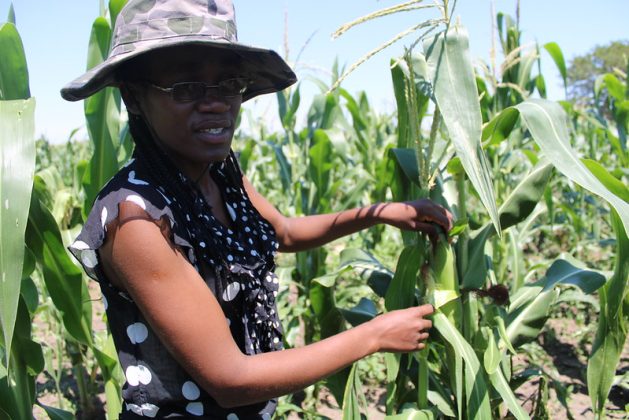 Young farmers who have land are failing to access bank loans despite the Zimbabwean government touting farming as the final frontier that will guarantee the country's food security needs. Credit: Busani Bafana/IPS

BULAWAYO, Zimbabwe, Mar 16 2021 (IPS) - It is not everyday that a young farmer registers success in his enterprise and vows this is what he will do for the rest of his life. Yet this is the story of Lihle Moyo, a 27-year-old farmer from Gwanda, about 160km south of Bulawayo, Zimbabwe’s second-largest city.

With little to no experience in farming, Moyo says he took over his father’s plot and turned it into a thriving poultry, cabbage, tomato and onion farm two years ago as an experiment.

“I had just finished college and had nothing to do, no source of income,” Moyo told IPS.

He pooled resources with assistance from siblings working outside the country to finance the installation of a borehole, water storage tanks, a generator and initial start-up capital for the project on his father’s eight hectares of land.

His success is outstanding in a country where farming has proven to be a headache for local farmers, especially in the aftermath of the country’s much criticised land redistribution programme that saw Zimbabwe morph from net food exporter to dipping into its scarce forex reserves to import grain.

“Not many young people I know are interested in farming because where are they are going to get start-up capital,” said Moyo on being asked why other young people like himself have not been too eager to take up farming.

While commercial famers in Zimbabwe previously received agro-loans from banks, financial institutions have been reluctant to lend to farmers who benefitted from the land reform exercise citing lack of collateral and security for farmers.

The same has plagued young farmers who, like Moyo, have land but are failing to access bank loans despite government touting farming as the final frontier that will guarantee the country’s food security needs.

Farmers are therefore expected to source their own resources despite the government launching schemes that provide free inputs such as seeds and free fertiliser.

“Even if you get these free things, you still have to think about how you are going to maintain your farm. And in any case one still has to contend with the fact that not every young farmer wants to plant maize. We want to try other things,” Moyo said.

Other aspiring young farmers such as 30-year-old Dumisile Gumpo, also from Gwanda, have given up on large-scale farming ambitions.

“I am only farming now on my parents’ land because of the rains,” Gumpo said. “After the rains, it means I will wait again for the next rainy season,” he said.

Gumpo plants traditional staples that include maize, pumpkins and peas.

“I would love to do farming all year round but I don’t see how when I have no cash to venture into other things such as poultry or even installing a borehole,” he said, expressing the frustration of many young farmers in Zimbabwe.

To make matters worse, the Gwanda region where the two young farmers are based is well-known for illegal mining activities whose promise of instant riches have attracted thousands of young people from across the country.

Experts have noted that youth agriculture has failed to take off in Africa because of policy inconsistencies by governments and poor research on the needs of young farmers.

According to the International Fund for Agriculture Development (IFAD), there are about 1.2 billion people aged between 15 and 24, with 600 million residing in rural areas globally.

IFAD has noted that especially in the midst of COVID-19, the “re-invention of the agricultural sector is indispensable today,” and young people are going to be at the centre of that revolution.

The Enhancing Capacity to Apply Research Evidence (CARE) project sponsored by IFAD and the International Institute of Tropical Agriculture (IITA) runs the Policy for Youth Engagement in Agribusiness and Rural Economic Activities in Africa.

The project seeks to understand the factors influencing youth engagement in agribusiness and rural farm economies among other areas of focus.

Researchers, however, are wary that there has been little traction in driving youth participation among African countries.

“Policy makers, government agencies, and other stakeholders need to come up with incentives that will attract youth involvement in agriculture practices if CARE-IFAD goals are to be realised,” said Esther Kwaamba, an agricultural economist at the Namibia University of Science and Technology.

“From research, the trends are the same among youths. They are not involved in agriculture because of lack of finance, access to land, poor infrastructure and agriculture machinery being expensive,” Kwaamba told IPS.

While IITA says there is need to increase “youth engagement in profitable agriculture and agribusiness is critical for sustainable development,” young farmers such as Moyo and Gumpo find themselves in a position where they have to teach themselves the ropes while they go.

“I have no business model, I just do what I think needs to be done. For example with the poultry project, I lost a lot of chicks when I first started because I had no clue about the business of raising chickens,” Moyo told IPS, exposing the difficulties many farmers face in a country where inflationary pressures have pushed many business to the ground.

While Zimbabwe has in the past distributed youth economic empowerment loans, Moyo says it has always been difficult to access these loans as farming is not seen as an enterprise that guarantees immediate returns.

“We have seen in the past young people being given loans but even for any project it has always been hard to get anything from government imagine telling them about your big ideas about farming,” he said.

Experts say the problems for young farmers are far-reaching as there remains a dearth of informed approaches to the youth involvement in agriculture.

“There is lack of you-specific research-based evidence to inform the design of youth-relevant policy and development programmes,” said agro-economist Dr. Shiferaw Fekele, in a presentation to CARE Intermediaries training focusing on youth research youth in Africa.

“There is need for more scholarly research to explore well-informed business opportunities in agriculture,” Feleke said.

A better approach to addressing this, according to Fekele, would be to have “youths researching youth” because “youths have a better grasp than anyone else of their peers’ real needs, aspirations, challenges and perspectives on agriculture”.

This rings true for Moyo and Gumpo, whose experience could well be a pointer for other youths on what needs to be done to attract more young people to farming in a country where tens of thousands of university graduates are without jobs alongside unskilled young people who leave school without hope of gainful employment.

“There is a need to strengthen the capacity of young Africa scholars in generating, appraising and disseminating evidence based-results and also strengthen the ability of key stakeholders to use evidence-based approach in policy development related to youth empowerment,” Fekele said.

The CARE project is already working with young researchers to inform the future action plans of national government that will lead to better youth policies.

These concerns could mean it is still a long way before young farmers such as Moyo add to the continent’s food security needs and take up land’s labour as a fulltime and lifelong occupation.