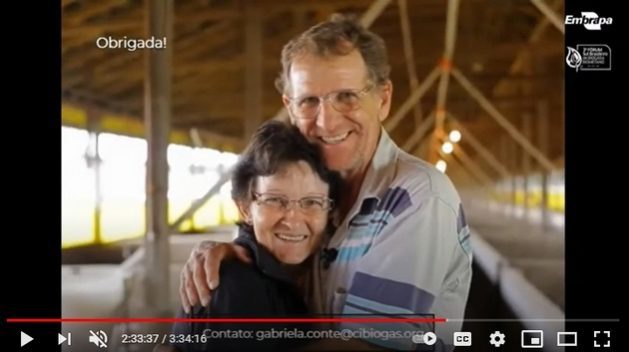 Claudete Volkswey and her husband smile together on their poultry farm in the municipality of Toledo, in the southwest Brazilian state of Paraná. The poultry shed is now heated using biogas instead of the wood-burning stove that used to keep her up at night, stoking it every two hours to keep the chicks warm in their first few weeks of life, as she explained at the South Brazilian Biogas and Methane Forum seminar, in her participation via videoconference. CREDIT: Mario Osava/IPS

RÍO DE JANEIRO, Apr 12 2021 (IPS) - “Biogas is worth gold to us, we can no longer live without it,” Claudete Volkswey, a poultry farmer in the municipality of Toledo, in the southwestern state of Paraná, Brazil, said enthusiastically about the new source of energy that has allowed her to get a good night’s sleep again, because she no longer has to get up to stoke the fire every two hours.

Ademar Luiz and his wife, Zenilde Nunes Luiz, also celebrate the alternative energy source that has freed them from the complications of firewood and has made it possible to have hot water round the clock, a blessing in the cold winters of Laurentino, a municipality in the southern state of Santa Catarina.

In the Northeast, Brazil’s poorest region, biogas forms part of the movement that is helping to overcome rural poverty in that semiarid ecoregion by disseminating so-called social technologies, the best known of which is rainwater harvesting tanks for human consumption and irrigation in family agriculture.

Spreading the use of biodigesters, the same way the rainwater tanks have been widely adopted, totaling more than 1.3 million today, is the dream of Ita Porto, coordinator of Diaconia in the Sertão do Pajeú, an area comprised of 20 municipalities in the interior of the northeastern state of Pernambuco.

“For this to happen, they have to become a public policy, as the rainwater tanks are. This would add energy security to the water and food security that are already taken into account by the government,” Porto told IPS by telephone from Afogados da Ingazeira, where one of Diaconia´s main offices is located.

Her ecumenical Christian-inspired social organisation is an active participant in the Articulação Semiárido do Brasil (ASA), a network of 3,000 diverse associations aimed at development in the semiarid Northeast based on coexistence with the ecosystem, in contrast to earlier failed official strategies to “combat drought”.

There are about 800 units of the Sertanejo Biodigester, a model designed by Diaconia, built in Brazil, most of them in the semiarid Northeast. The initiative won a mention in the third edition of the Biodigester Network for Latin America and the Caribbean’s RedBioLAC magazine, in 2019.

Biogas is becoming an important energy source in this South American country of 212 million inhabitants, both for electricity and heat generation and for the production of biomethane to replace fossil fuels.

The enormous amount of agricultural, industrial and urban waste represents a potential of which only two percent is currently used, according to Alessandro Gardemann, president of the Brazilian Biogas Association, which groups companies and producers in the sector.

The advance of commercial production is made in sanitary landfills, in large agricultural and industrial units. In the south of Brazil, the expansion of pig and poultry farming is driving the biodigestion of their excrement, to boost profits, reduce costs and meet growing environmental demands.

They can play an important role in the energy system, providing power and balance, in the face of the major growth of intermittent sources, wind and solar, in addition to reducing greenhouse gas emissions.

But it is the family biodigesters, noted for their proliferation rather than their size, that generate the most visible social and environmental benefits.

For Claudete Volkswey and her family, biogas meant keeping the poultry shed housing about 19,000 chickens and chicks on their farm warm without having to wake up “two or three times” in the middle of the night, sometimes in sub-zero temperatures, to stoke the wood-fired oven that was the previous source of heat. 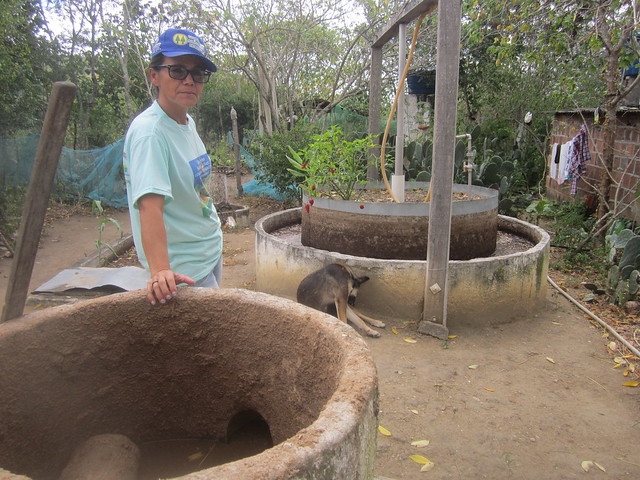 This biodigester is on a small farm in the semi-arid region of the state of Pernambuco in Northeast Brazil. In general, local families now use biogas for cooking, replacing cooking gas cylinders, which are expensive in comparison to the income levels in this part of the country. CREDIT: Mario Osava/IPS

“Our health is at stake,” Volkswey said in her presentation via videoconference at the South Brazilian Biogas and Biomethane Forum, which took place from Mar. 29 to Apr. 1, virtually due to the COVID-19 pandemic.

The manure, which is like gold for biogas production, comes from the 9,000 “nursery” piglets that Volkswey’s son is raising on the family farm in Toledo, a municipality that concentrates the largest number of pigs in Brazil: around 1.2 million.

The cost of firewood used to be as high as 2,800 reals (about 500 dollars) a month. The biodigester that has heated the poultry shed for the past nine years was costly, as it was one of the first in the western part of the state of Paraná, “but it was worth it,” said Volkswey.

Not having to forage for or buy firewood is another advantage cited by Ademar Luiz, also a pioneer in biogas in his municipality, Laurentino, 120 kilometres from the coast of Santa Catarina.

He built a small biodigester in 2008, to try it out. Six years later he built a larger one that allowed him to fuel the stove and heat water for the household round the clock. He no longer uses firewood or the electric shower heater, which saves the family 90 dollars a month.

Farmers Ademar Luiz and Zenilde Nunes Luiz decided to produce biogas to cook and heat water in their house in Laurentino, a municipality where winters are cold in the southern state of Santa Catarina, saving on firewood and electricity. This screenshot was taken from their presentation at the South Brazilian Biogas and Biomethane Forum, held in late March in Brazil. CREDIT: Mario Osava/IPS

Luiz only uses the manure from his four dairy cows. He used to have 30 and produced 600 litres of milk a day, in addition to raising other cattle, but he sold almost all of them two years ago, when he was 56. It became difficult for him to care for so many animals because of his back trouble.

Producing milk is hard work and a dairy farm is like “a prison” as you have to be there every single day. “But I like it,” he told IPS by phone from his farm, where he also grows corn and soybeans. “With a tractor and harvesting machine, I can do it,” he added.

Luiz confessed that before he had the biodigester he used to dump the manure into the river, “for the bad luck of those who live downstream.”

There are many environmental benefits, because the biodigesters protect water, forests and the climate, as well as eliminating odors and mosquitoes. 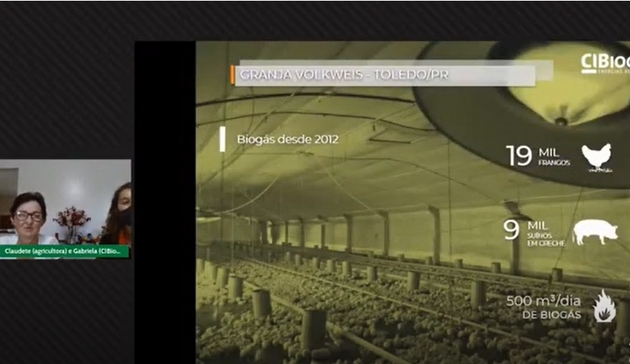 A screenshot from Claudete Volkswey’s videoconference presentation at the South Brazilian Biogas and Biomethane Forum shows the poultry shed where she raises some 19,000 chickens. She decided to produce biogas on the family farm, using a biodigester fueled by the manure from the pigs that are also raised on her farm, and abandoned the use of the wood-burning stove, which would keep her or another family member up at night as it needed to be stoked every two hours to keep the newly hatched chicks alive on nights when temperatures sometimes drop below freezing. CREDIT: Mario Osava/IPS

In addition, biodigestion converts the waste into fertiliser and as a result, he said, his corn harvest grew.

“That’s why I don’t understand why other farmers don’t join the move to biogas, the manure is free. I am the only one using a biodigester in this municipality,” he lamented. The necessary investments are paid off with what is saved in just a few years and are easily financed in the banks, he said.

His wife was also reluctant at first. She only approved of the novel system after discovering that the beans and chicken stew cooked on the biogas stove didn’t smell like manure, he joked.

Ita Porto emphasises that women benefit the most. In general, they are the ones in charge of fetching firewood and, because they do the cooking, their health is affected by constantly breathing smoke from burning wood or charcoal. 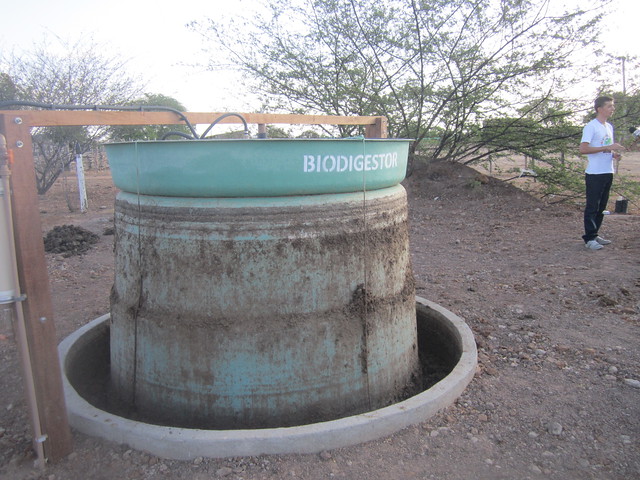 This biological digester was built by a regional university to supply biogas to a bakery run by a women’s cooperative in Pombal, a municipality in the semi-arid ecoregion in the Northeast Brazilian state of Paraiba. This waste-to-energy generator provides half of the electricity used by the bakery, which sells a large part of its products to the lunch programme in local schools. CREDIT: Mario Osava/IPS

A World Bank study released in 2020 estimated that 2.75 billion people still use wood or charcoal for cooking. Many die of lung cancer, respiratory damage and heart disease as a result.

Widespread replacement of traditional stoves with safer and healthier cookstoves would have dramatic health, environmental and social effects, experts say.

Incipient and scattered actions are promoting the use of biogas in Brazil.

In the state of Ceará in Northeast Brazil, the non-governmental Centre for Labour Studies and Worker Advisory Services (CETRA) has been running a project since 2017 that envisages the construction of 1,800 biodigesters with support from several national and international institutions, Porto explained.

The route to massive dissemination of the technology could open up if one or more Brazilian states adopted this alternative as public policy, the activist asserted.