A view of Explora's biodiesel plant on the outskirts of the city of Rosario, where most of the companies that process soybean oil in Argentina are concentrated. In recent years, biofuels have generated investments of more than three billion dollars in the country, in addition to more than one billion dollars a year in exports, before the collapse in demand caused by the COVID pandemic. CREDIT: Courtesy of Explora

BUENOS AIRES, Aug 30 2021 (IPS) - Argentina, historically an agricultural powerhouse, has become a major producer of biofuels in recent years. However, this South American country is now moving backwards in the use of this oil substitute in transportation, a decision in which economics weighed heavily and environmental concerns have been ignored.

On Jul. 15, with the support of the government of centre-left President Alberto Fernández, Congress passed a new Biofuels Regulatory Framework, which will be in force until 2030.

The new law published on Aug. 4 reduced from 10 to five percent the minimum mandatory blend of soybean oil biodiesel in diesel fuel, and gave the executive branch the option of lowering it to three percent if deemed necessary to cut fuel prices for consumers.

"To mitigate we need all the available tools. And in this case, perhaps the worst thing is the setback in an area in which the country has gained a great deal of know-how and capacity, making it one of the largest users of renewable energy in transportation worldwide." -- Luciano Caratori

With respect to gasoline, the law maintained the current 12 percent bioethanol – based on corn and sugar cane – blend, but gives the government the option of lowering it to nine percent.

“The mandatory blends of petroleum-derived fuels with biofuels came into effect in 2010 and since then have generated the largest reduction in greenhouse gas (GHG) emissions in Argentine history, at least until 2019,” energy consultant Luciano Caratori, a researcher at the Torcuato Di Tella Foundation, which focuses on environmental issues, and former undersecretary of energy planning, told IPS.

The expert mentioned 2019 because it was the first year that non-conventional renewable energies – basically wind and solar – represented a significant share of electricity generation in this Southern Cone country of 44.4 million people.

Today, according to official figures, they account for 9.7 percent of the electricity mix, in a country where 87 percent of the primary energy supply is based on fossil fuels: 54 percent natural gas, 31 percent oil, and the rest, coal.

Argentina, Latin America’s third largest economy, is a net exporter of oil, but due to its limited refining capacity it is also a net importer of gasoline and diesel.

Caratori said the reduction in biofuel use is inconsistent with the climate change mitigation commitments Argentina submitted in December 2020, in the update of its Nationally Determined Contribution (NDC) under the Paris Agreement.

This country has committed to cutting GHG emissions by more than 20 percent by 2030 from the 2007 peak, and to achieving carbon neutrality by 2050.

One of the ways to reach these goals, according to the NDC, is to reduce emissions from transportation – a sector that accounted for 33 percent of total energy demand in 2019 – through the use of biofuels and hydrogen and electrification. 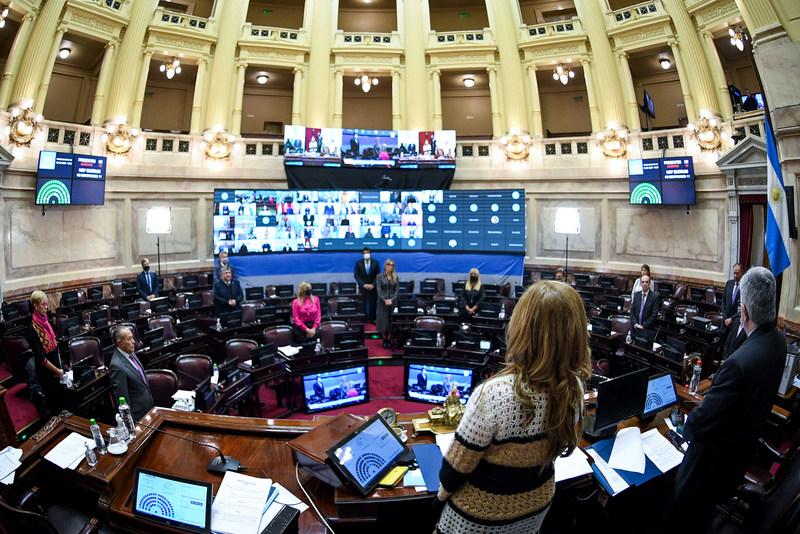 The Argentine Senate special public session in which the law reducing the mandatory percentage of biofuels in the blend with petroleum derivatives was approved. Most of the legislators voted remotely, due to COVID pandemic restrictions. CREDIT: Argentine Senate

“There don’t seem to be too many opportunities in Argentina to offset the emissions savings lost from reducing biofuel use, and 2030 is just around the corner,” said Caratori.

“To mitigate we need all the available tools,” he stressed. “And in this case, perhaps the worst thing is the setback in an area in which the country has gained a great deal of know-how and capacity, making it one of the largest users of renewable energy in transportation worldwide.”

In the Senate, the ruling party’s Rubén Uñac, chair of the energy commission, acknowledged that the biofuels industry made possible the creation of “new companies and thousands of jobs” over the last decade, through “more than three billion dollars in investments.” But he said the system was in need of “in-depth reform.”

In the opposition, the chair of the Senate commission on the environment and sustainable development, Senator Gladys González, denounced “fierce lobbying by the oil companies” and argued that the government “says one thing and does another,” because it expresses in public a deep commitment to the fight against climate change that does not translate into action.

A study published in July by Caratori and Jorge Hilbert, an expert with the government’s National Institute of Agricultural Technology (INTA), points out that the current installed biodiesel and bioethanol production capacity could cover between 4.5 and 8.0 percent of Argentina’s international commitment to GHG emissions reduction.

“The decarbonisation opportunity offered by biofuels is considered to be very significant with minimal investment,” the paper underscores.

Pros and cons, depending on who is looking at it

In any case, the real environmental impact of biofuels is disputed. María Marta Di Paola, director of research at the Environment and Natural Resources Foundation (FARN), raised several reservations. 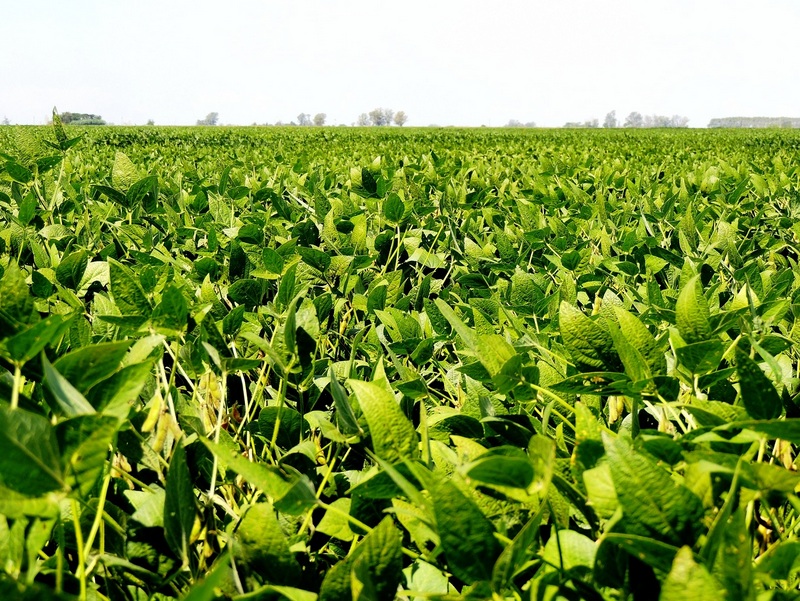 View of a soybean field in the province of Santa Fe, in western Argentina. Biodiesel is made from soybean oil in more than 50 plants near the city of Rosario, located in the south of the province. CREDIT: Confederaciones Rurales de Argentina

“We are concerned that they fuel the expansion of the agricultural frontier, compete with the use of crops for food and rely on agricultural production that is highly dependent on fossil fuels,” she told IPS.

“Consequently, although biofuels are presented as an alternative for the energy transition, it is very difficult to quantify their real contribution to the fight against climate change,” said the expert from FARN, one of the country’s most respected environmental institutions.

“In any case, the decision made by the government and Congress had to do with other issues, which clearly demonstrates that the priority given in Argentina to environmental debates is very low,” Di Paola asserted.

At any rate, the industry dismisses the misgivings that are raised.

“Less than five percent of Argentina’s arable land is involved in biofuel production,” Claudio Molina, executive director of the Argentine Biofuels and Hydrogen Association, which has been promoting biofuel production for 15 years, told IPS. “Only three percent of the total corn harvest is used to make bioethanol.”

In Argentina, biodiesel, produced by national and international private capital, received its first big boost through exports, which between 2012 and 2019 generated more than one billion dollars a year, according to official data.

However, the drop in demand due to the COVID-19 pandemic led to a sharp decline in 2020, when exports dropped to 468 million dollars.

The main market is the European Union, since the United States slapped high tariffs on Argentina’s biodiesel in 2017 to protect its soybean producers.

The pandemic’s impact on demand and a rise in the price of biodiesel put pressure on the government and left it with two alternatives that it wants to avoid: authorise an increase in consumer fuel prices or reduce the profit margin of the oil companies, especially the state-owned YPF.

This is included in the text of the new law, which states that the government reserves the right to further reduce the percentage of biofuels in the fuel blends when an increase in the prices of biodiesel or bioethanol inputs “could distort the price of fossil fuels at the pump.”

Axel Boerr is vice-president of Explora, a company with the capacity to produce 120,000 tons of biodiesel per year at its plant on the outskirts of the city of Rosario, an area he describes as “Argentina’s Kuwait”, due to the number of factories that generate energy from oil from the soybean fields that abound in the area.

In an interview with IPS, Boerr said biofuels were a way to add value to agricultural production and help Latin American countries become more than just exporters of primary products.

“In addition, this will aggravate our external dependence, because Argentina is an importer of gasoline and diesel and will have to buy more and more, since it has no more oil refining capacity,” he predicted.

The political negotiations ensured that the current six percent blend would remain in place for sugarcane bioethanol. This secured votes in Congress from legislators from the northwest provinces, which are sugarcane producers.

A possible reduction from six to three percent was left open in the case of corn bioethanol.

“We don’t believe in the argument that we have to take care of consumer fuel prices, because what determines them is oil, not biofuels,” Patrick Adam, executive director of the Corn Bioethanol Chamber, told IPS.

“Today we are working at 70 percent of our capacity and with these changes, which represent a step backwards in terms of the climate, we would drop to 40 percent. We were ready to grow and this law caught us off guard,” he concluded.