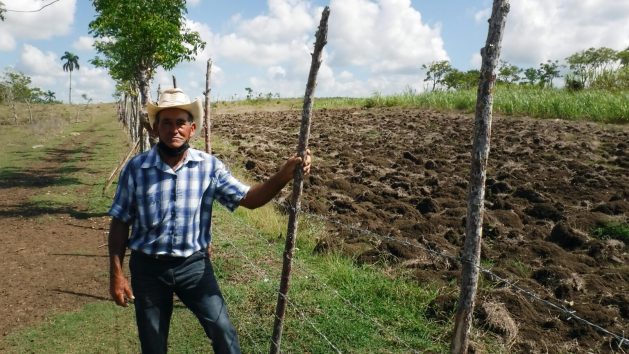 Farmer José Antonio Sosa, known as Ché, stresses the importance of taking into account the direction of the land for planting, and the use of live or dead barriers to prevent rains from washing away the topsoil to lower areas, thus combating soil degradation in Cuba. CREDIT: Jorge Luis Baños/IPS

HAVANA, May 23 2022 (IPS) - Thorny bushes and barren soil made it look like a bad bet, but Cuban farmer José Antonio Sosa ignored other people’s objections about the land and gave life to what is now the thriving La Villa farm on the outskirts of Havana.

“The land was a mess, covered with sweet acacia (Vachellia farnesiana) and sickle bush (Dichrostachys cinérea), with little vegetation and many stones. People asked me how I was going to deal with it. With an axe and machete I gradually cleared the undergrowth, in sections,” Sosa told IPS.

Now there are plots of different varieties of fruit trees, vegetables and tubers on the 14 hectares that this farmer received from the State in usufruct in 2010, as part of a government policy to reduce unproductive land and boost food production.

The crops feed his family, while contributing to social programs and sales to the community, after part of the produce is delivered to the Juan Oramas Credit and Services Cooperative, to which the farm located in the municipality of Guanabacoa, one of the 15 municipalities of the Cuban capital, belongs.

On the farm, where he works with his family and an assistant, Sosa produces cow and goat milk, raises pigs and poultry, and is dreaming of farming freshwater fish in a small pond in the not too distant future.

La Villa is in the process of receiving “sustainably managed farm” certification. The farm and Sosa represent a growing effort by small Cuban farmers to recuperate degraded land and use environmentally friendly techniques.

The restoration of unproductive and/or degraded lands is also connected to the need to increase domestic food security, in a country highly dependent on food imports, whose rising prices mean a domestic market with unsatisfied needs and cycles of shortages such as the current one.

"The guideline foresees implementing new financial economic instruments or improving existing ones by 2030 in order to achieve neutrality in land degradation." -- Jessica Fernández

At the end of 2021, Cuba had 226,597 farms, 1202 of which had agroecological status while 64 percent of the total – some 146,000 – were working towards gaining agroecological certification, according to official statistics.

Sosa, who has been known as “Che” since he was a child, said the use of natural fertilizers and animal manure has made a difference in the recovery and transformation of the soil.

“It is also important to pay attention to the way crops are cultivated or harvested, to avoid compaction,” the farmer said.

Studies show that changes in land use, inadequate agricultural practices (including the intensive use of agricultural machinery and irrigation), the increase in human settlements and infrastructure and the effects of climate change are factors that are accelerating desertification and soil degradation in this Caribbean island nation of 11.2 million people.

Sosa stressed the importance of paying attention to the direction of the land for planting, and the use of living or dead barriers “to prevent the water from carrying the topsoil to lower areas when it rains.” 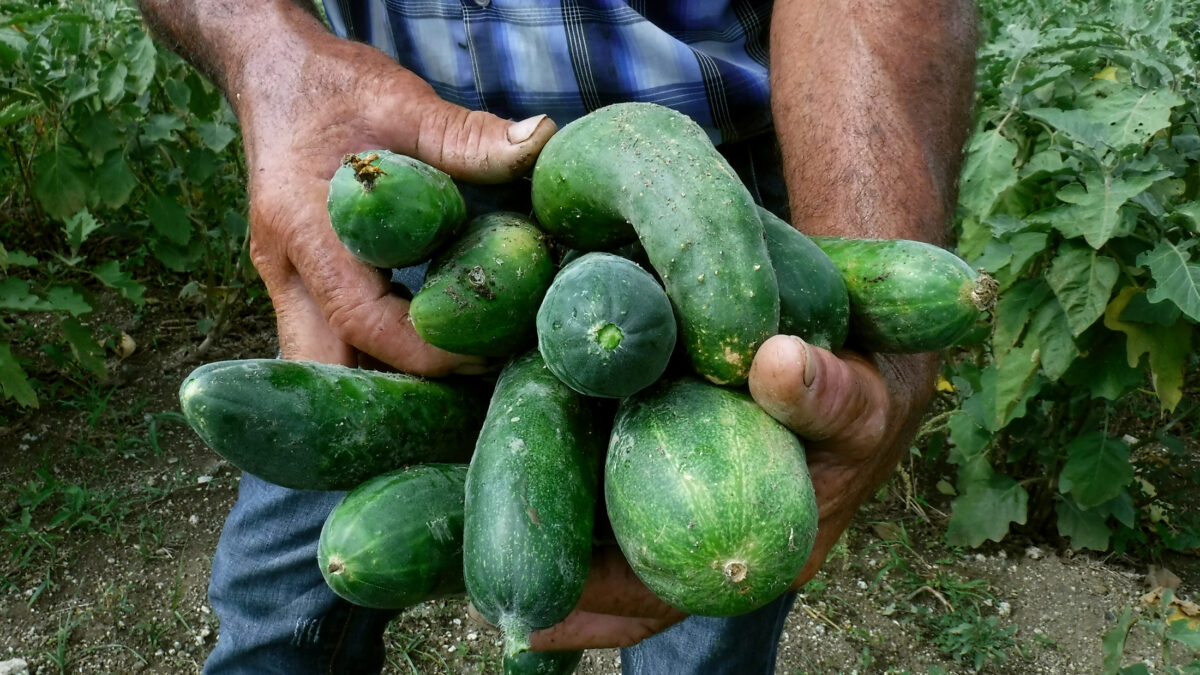 These cucumbers were grown using agroecological techniques on the La Villa farm, located in the municipality of Guanabacoa, one of the 15 that make up Havana, Cuba. CREDIT: Jorge Luis Baños/IPS

In this archipelago covering 109,884 square kilometers, 77 percent of the soils are classified as not very productive.

They are affected by one or more adverse factors such as erosion, salinity, acidity, poor drainage, low fertility and organic matter content, or poor moisture retention.

The most recent statistics show that 35 percent of the soil in Cuba presents some degree of degradation.

But at 71 years of age, Sosa, who has worked in the countryside all his life, has no doubt that climate change is hurting the soil.

“The rain cycles have changed,” Sosa said. “When I was young, in the early 1960s, my father would plant taro (Colocasia esculenta, a tuber that is widely consumed locally) in March, around the 10th or so, and by the 15th it would be raining heavily. That is no longer the case. This April was very dry, especially at the end of the month, and so was early May.”

He also referred to the decrease in crop yields and quality, “as soils become hotter and water is scarcer.”

Several studies have corroborated important changes in Cuba’s climate in recent years, related to the increase in the average annual temperature, the decrease in cloud cover and stronger droughts, among other phenomena.

According to forecasts, the country’s climate will tend towards less precipitation and longer periods without rain, and by 2100 the availability of water potential could be reduced by more than 35 percent.

But more intense hurricanes are also expected, atmospheric phenomena that can discharge in 48 hours half of the average annual rainfall, with the consequent stress and severe soil erosion.

Although the least productive lands are located in the east, and Cuba’s so-called semi-desert is limited to parts of the southern coast of Guantánamo, the easternmost of the 15 provinces, forecasts indicate that the semi-arid zones could expand towards the west of the island. 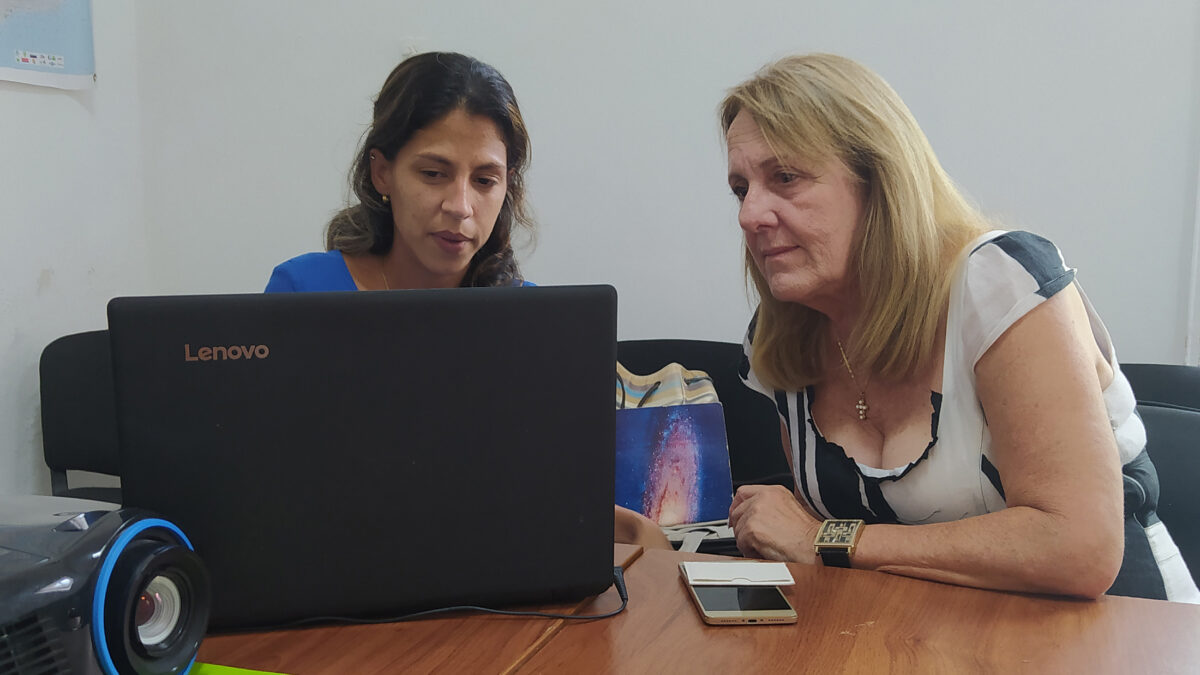 Gloria Gómez (right), director of Natural Resources, Prioritized Ecosystems and Climate Change, and Jessica Fernández, head of the Climate Change Department of the General Directorate of Environment of Cuba’s Ministry of Science, Technology and Environment, confirm the government’s intention to promote the use of credits, insurance and taxes as incentives for farmers to improve soils. CREDIT: Luis Brizuela/IPS

Likewise, the Cuban government is committed to the 2030 Agenda and its 17 Sustainable Development Goals (SDGs), agreed within the United Nations in 2015.

In SDG 15, which involves life on land, target 15.3 states that “By 2030, combat desertification, restore degraded land and soil, including land affected by desertification, drought and floods, and strive to achieve a land degradation-neutral world.”

According to Sosa, the increase in soil degrading factors requires more efforts to restructure its physical and chemical characteristics.

In addition, he said, mechanisms should be sought to prioritize irrigation, taking into account that many sources are drying up or shrinking due to climate variability.

“In my case, I irrigate the lower part of the farm with a small system connected to the pond. But in the higher areas of the farm I depend on rainfall,” he said.

The construction of tanks or ponds to collect rainwater, in addition to the traditional reservoirs, are ideal alternatives for this Caribbean country with short, low-flow rivers and highly dependent on rainfall, which is more abundant during the May to October rainy season.

But farmers like Sosa require greater incentives: there is a need for more training on the importance of sustainable management techniques, and for economic returns, as well as financial and tax support, in order to make agroecological practices more widespread. 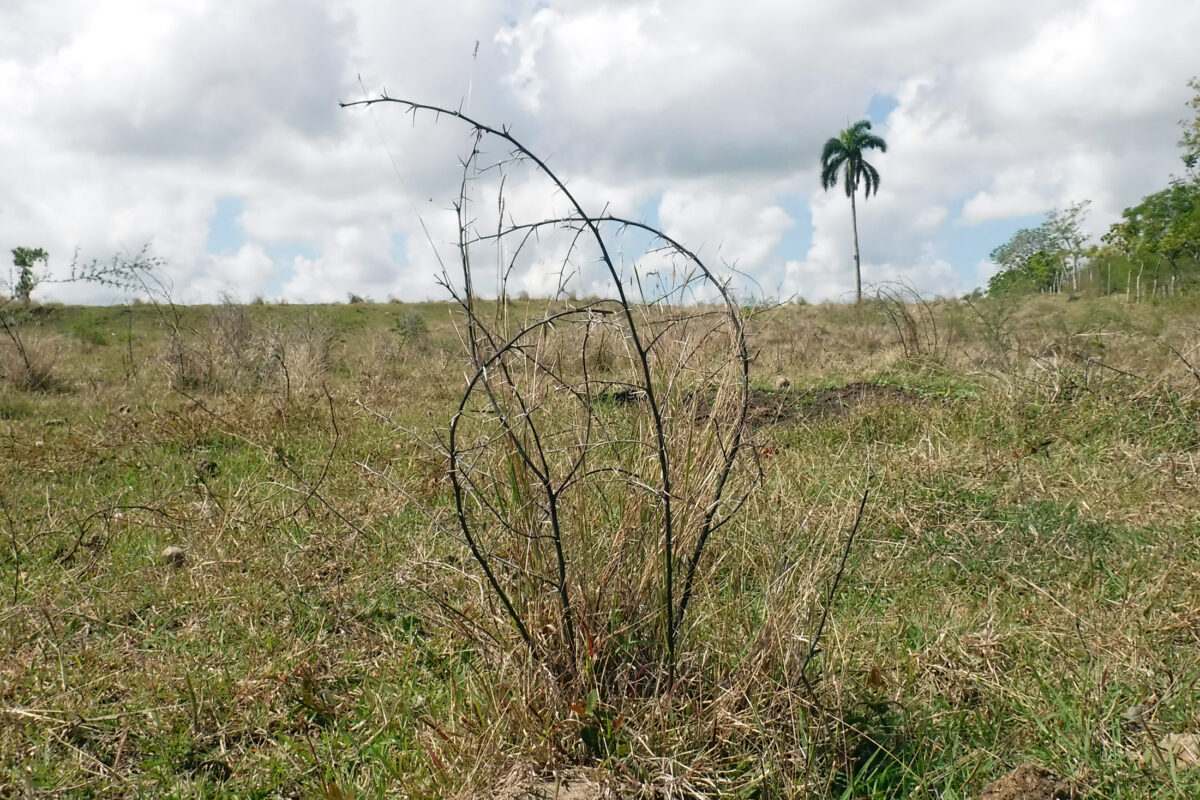 The use of natural fertilizers and animal manure is one of the keys to the restoration and transformation of the once degraded soils covered with thorny bushes of what is now La Villa farm, in the municipality of Guanabacoa, Havana, Cuba. CREDIT: Jorge Luis Baños/IPS

“The guideline foresees implementing new financial economic instruments or improving existing ones by 2030 in order to achieve neutrality in land degradation,” Jessica Fernández, head of the Climate Change department of the Ministry of Science, Technology and Environment, told IPS.

The plan is to enhance the use of credits, insurance and taxes as economic incentives for farmers, based on soil improvement and conservation, and to account for the current expenses destined to environmental solutions to determine the total expenses for soil conservation, the official added.

“We are in talks and studies with the Central Bank of Cuba to gradually introduce green banking,” Gloria Gómez, director of natural resources, prioritized ecosystems and climate change at the ministry, told IPS.

“This service will seek to promote and finance projects that provide solutions to environmental problems through loans with lower interest rates, longer repayment periods, incentives for green products and services, or eco-labeling,” she said.

In the last five years, the principles of Sustainable Land Management (SLM) were applied to more than 2525 hectares, while one million of the more than six million hectares of agricultural land in the country received some type of benefit, statistics show.

Other national priorities are related to increasing the forested area to 33 percent, extending the areas under SLM by 150,000 hectares and improving 65 percent of agricultural land by the end of the current decade.