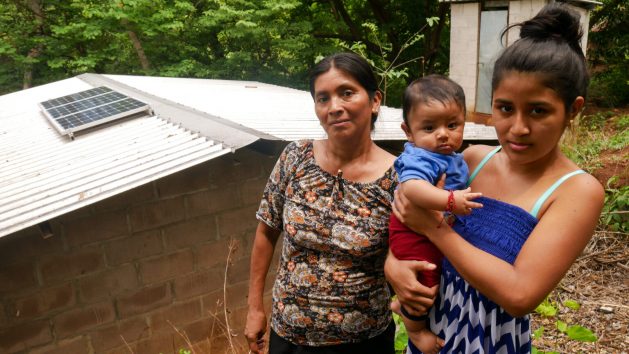 Francisca Piecho stands with her daughter-in-law Johana Cruz and her grandson outside her home that now has electricity from solar energy, in the village of Cacho de Oro, Teotepeque municipality, in the southern department of La Libertad. Hers and other rural Salvadoran families have seen their lives improve with the arrival not only of electricity but also of a reforestation program in the area. CREDIT: Edgardo Ayala/IPS

TEOTEPEQUE, El Salvador , May 5 2022 (IPS) - After working on the family farm, Carlos Salama comes home and plugs his cell phone into a socket via a solar-powered electrical system, a rarity in this rural village in southern El Salvador.

“Just being able to charge the phone with our own electricity, which comes from the sun, is a great thing for us,” the 29-year-old farmer who lives in Cacho de Oro, a rural settlement nestled in hills on the shores of the Pacific Ocean in Teotepeque municipality in the southern department of La Libertad, told IPS.

Salama’s mother, Rosa Aquino, was also enthusiastic about the electrical system installed in her home and 15 other houses in the village in late April.

“It feels good, we never had electricity… at night it makes you happy. When I was a child we used kerosene lanterns. And then battery lamps, and now we save what we used to spend on batteries,” Aquino, 45, told IPS. 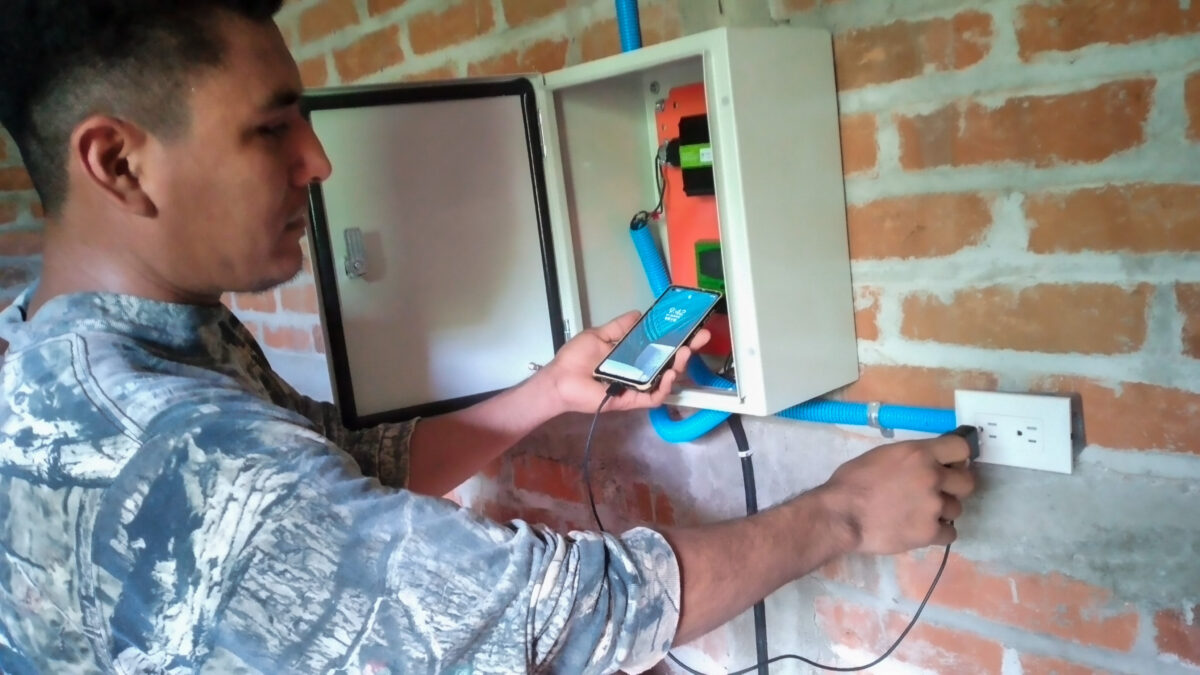 Salvadoran farmer Carlos Salama recharges his cell phone by means of a solar energy system installed on the roof of the house where he lives in the village of Cacho de Oro, in the municipality of Teotepeque. Although the system does not support appliances that consume more than 500 watts, the families now have lightbulbs to use at night, can charge their cell phones and can use small appliances. CREDIT: Edgardo Ayala/IPS

Some 50 families live in Cacho de Oro, dedicated to subsistence agriculture. And although the village has had electricity from the national grid for some years now, nearly twenty families, the poorest, have not been able to afford the connection to the grid.

That was the case of the family of Francisca Piecho, a 43-year-old farmer who lives with her son and his wife and their little boy in a dirt-floor dwelling.

Piecho’s husband works in another area of the country cutting sugar cane, as he could not find work in Cacho de Oro.

The family could not afford to pay the 500 dollars it cost to connect to the national power line that had finally reached the village.

“Some families have relatives in other countries who send them remittances, but we don’t have any, and we couldn’t afford it,” Piecho told IPS, while stirring a stew on a wood stove.

Her son was not at home when IPS visited the village. But Piecho said he works in agriculture, mainly during the May to November rainy season, because in the dry season there is almost no work available. 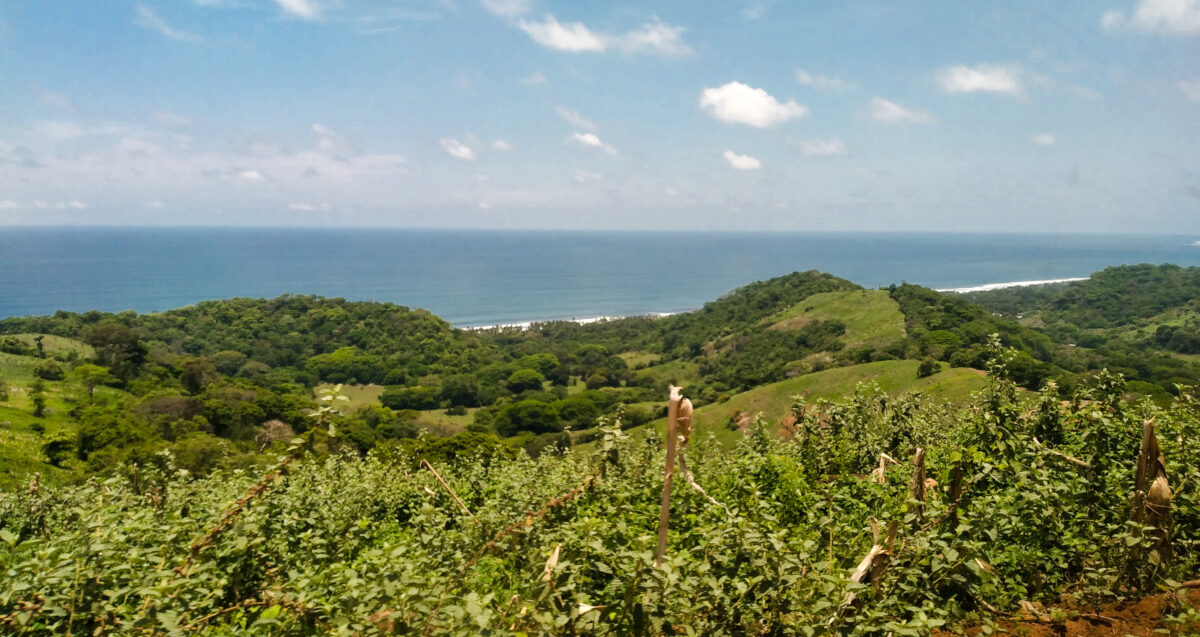 The village of Cacho de Oro is perched on top of a hill along the Pacific Ocean in southern El Salvador, a remote impoverished area where unemployment is particularly acute during the November to May dry season, when no agricultural work is available. The privatized electricity system has not connected these villages to the national grid because it is not profitable. CREDIT: Edgardo Ayala/IPS

In El Salvador, electricity distribution has been privatized since 1998, and many rural villages do not have electric power because they are very small and the companies do not see investing there as good business.

According to official figures, 95.2 percent of households in rural areas have access to electricity, while 2.0 percent use candles, 0.8 percent use solar panels, 0.5 percent use kerosene, and 1.4 percent use other means.

But now the poorest families in Cacho de Oro also have electricity, and from a clean energy source, thanks to the solar power project brought to the village by the governmental Environmental Fund of El Salvador (Fonaes), at a cost of 16,000 dollars. 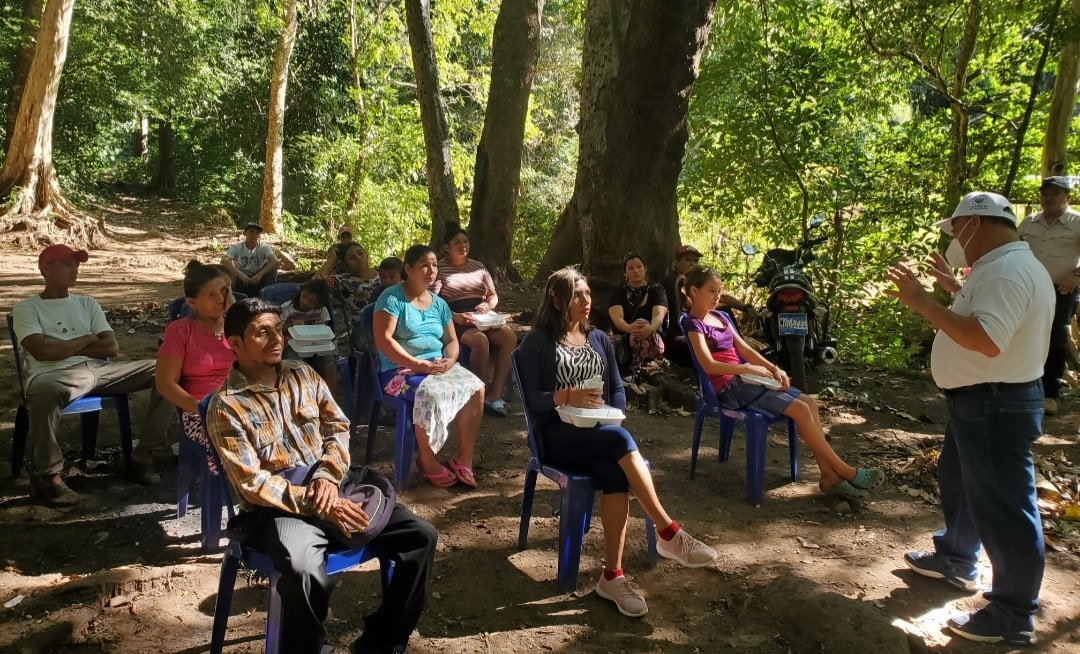 Staff from the municipal government in Jicalapa, in the southern Salvadoran department of La Libertad, explain to a group of residents from the village of Izcacuyo about the solar electrification project that began in December 2021, as well as the community reforestation effort. CREDIT: Municipality of Jicalapa

Solar energy to the rescue

Solar panels were installed on the rooftops of the houses of nearly twenty families. The panel provides just enough electric power to connect a couple of light bulbs, charge a cell phone and plug in small appliances that consume less than 500 watts.

“If the appliances consume more than that, it’s not enough to turn them on,” Arturo Solano, a technician with Tecnosolar, the company that supplied the panels, told IPS.

He added that there are approximately 100 community solar energy projects in rural El Salvador, a country of 6.7 million inhabitants. About 7,500 homes have been electrified with this clean energy source.

“You have to adapt to the system and buy appliances that are compatible with the power it supplies,” he said, adding that the amount of energy provided depends on the investment made, because if you want more power, you have to install more panels.

Even so, with this very basic electricity service, the residents of Cacho de Oro are happy to at least have electric light and an outlet to charge their cell phones and stay in communication.

Before the arrival of the solar energy project, some of the families were able to connect to the national grid indirectly through neighbors who were connected. But this meant that they had to pay part of the monthly bill.

“Now we no longer pay part of the bill, which cost us five dollars. We use that money to buy some food, eggs or oil,” Francisco de la Cruz Tulen, a 30-year-old farmer who lives with his wife Milagro Menjívar, 21, and their two small children, told IPS, pleased to have electricity at no monthly cost.

In the rainy season, Tulen, like the rest, rents a small plot of land to plant the staple crops of Central America – corn and beans – to feed the family. He also works on other farms as a day laborer, to earn a little money.

But in the dry season, he leaves the village to look for work in the sugar cane fields. This work, one of the most physically demanding in agriculture, pays between six and 24 dollars a day. 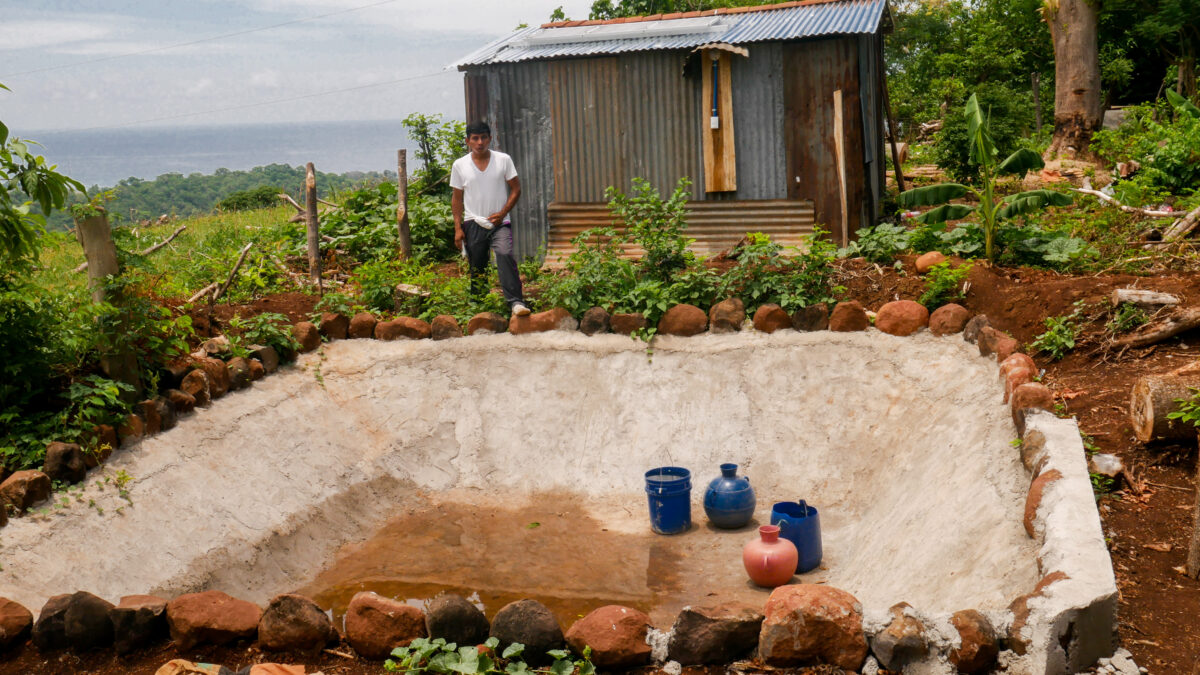 In addition to the solar electrification project in the village of Cacho de Oro in southern El Salvador, reservoirs have been built to capture rainwater and irrigate fruit and timber trees planted to reforest the area and provide food, such as avocados, and keep the aquifers healthy. CREDIT: Edgardo Ayala/IPS

There is no potable water in Cacho de Oro. The families get their water from a spring that sometimes dries up in the dry season and at times they have to buy water in barrels brought in by truck. Each barrel costs 2.5 dollars.

“There are possibilities of getting piped water. A Japanese development cooperation project has dug a well, but we are still waiting to see,” German de la Cruz Tesorero, a resident of the village and the president of the local Communal Development Association (Adescos), an organizational system for small settlements in this Central American country, told IPS.

To maintain water sources and to provide food, the solar electrification project is also accompanied by a reforestation effort in the area. In addition, small reservoirs have been built to irrigate the trees and home gardens.

This has occurred not only in Cacho de Oro, but also in another village located downstream, called Izcacuyo, in the municipality of Jicalapa, also in the department of La Libertad. 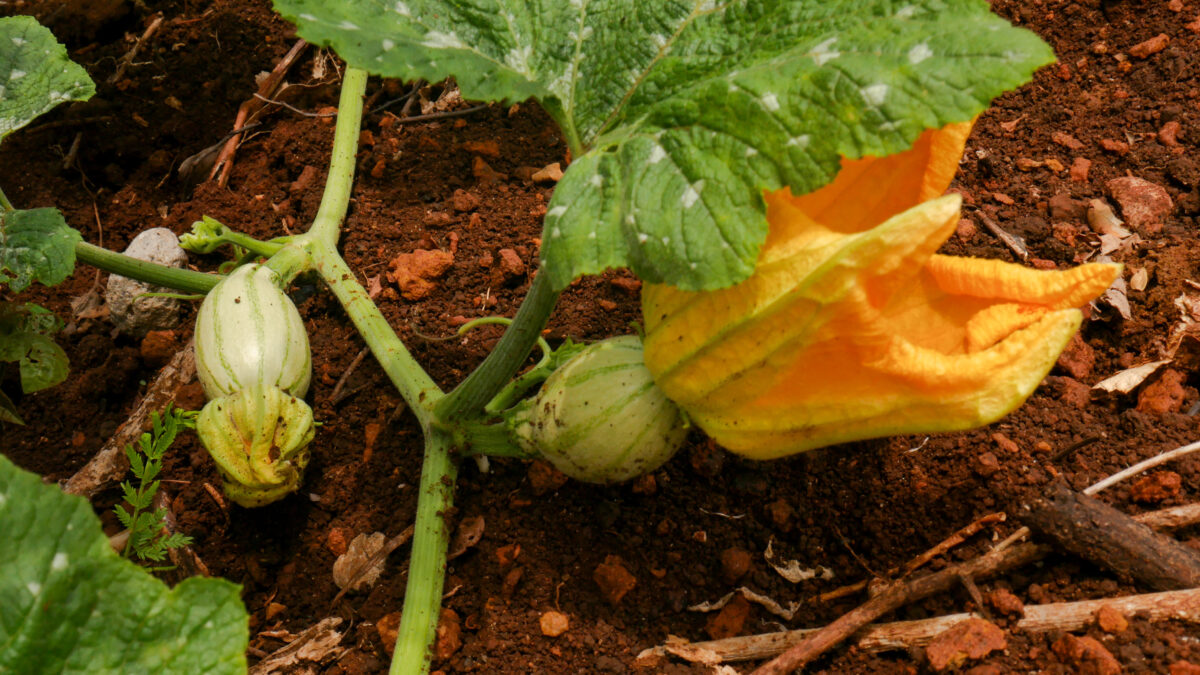 Some families have planted vegetable gardens next to their homes in the southern Salvadoran village of Cacho de Oro, growing vegetables such as “pipián”, a highly prized local squash, to boost food production in this impoverished part of the country. CREDIT: Edgardo Ayala/IPS

The families of Izcacuyo have their own solar electrification project, inaugurated in December 2021, with the difference that they had never received energy from the national grid.

To charge a cell phone, villagers had to go to the canton of La Perla, a 30-minute bus ride away.

The total cost of the local electrification and reforestation project was 38,000 dollars, including 30,000 provided by Fonaes, 4,000 by the municipal government and the other 4,000 from work contributed by the community, which was counted as hours of labor.

Some 5,450 fruit trees have been planted in family plots, including avocado, lemon and mango trees, as well as timber species such as madrecacao (Gliricidia sepium), which offers advantages to the habitat and soils by fixing nitrogen.

The project also provided fertilizer to ensure that the trees grew well.

The municipal government’s idea is that in three or four years, families will be harvesting avocados, mangos and lemons, and part of the production can be marketed along the coastal strip of the department of La Libertad, catering to tourists and hotels and restaurants in the area.

“They will see the benefits in a couple of years,” said William Beltrán, a technician in the Jicalapa municipal government, during a meeting with IPS in San Salvador.