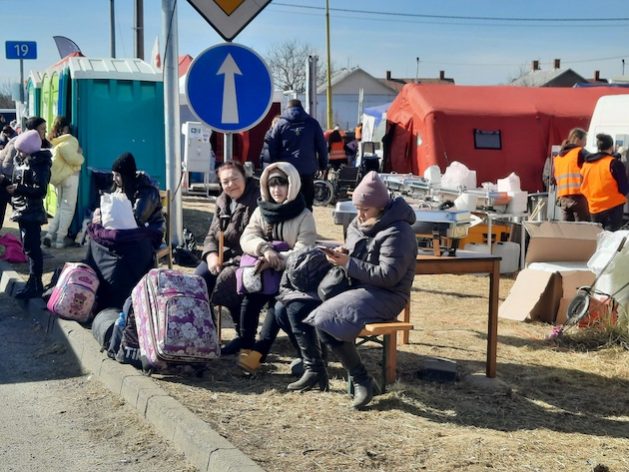 Women have been highly impacted by the Ukraine war, and have headed humanitarian efforts in their communities, but are still absent from leadership positions. UN Women and Care called for their meaningful inclusion in planning and decision-making processes. Credit: Ed Holt/IPS

New York, May 11 2022 (IPS) - A joint UN Women and CARE report on the gender disparities in the wake of the Ukrainian crisis calls for donors and humanitarian partners to take greater care to promote the voices of women and marginalized communities in the humanitarian effort.

The Rapid Gender Analysis by UN Women and CARE, released on May 4, 2022, revealed the challenges and hardships women and minority groups face in Ukraine. UN Women and CARE officers conducted interviews with over 170 participants to determine how the war impacted their needs and concerns.

The war has affected multiple areas of life, from education and healthcare access to their livelihoods. In the last two months, women have emerged to take on more authority in households and the community, including community and civil society organizations.

Women have been at the forefront of humanitarian efforts, the report reveals. However, they have not been included in leadership or the decision-making process.

The risk is that current humanitarian efforts do not fully address the more complex needs of the affected civilians, such as the disabled, people who have already been displaced before the current crisis, and ethnic minorities, such as the Roma.

Among the report’s key findings, women, men, boys, and girls have different needs that must be considered in the humanitarian response.

However, the current frameworks of humanitarian aid need to improve to address their complex needs better.

Women, minorities, and other underrepresented groups face greater pressure with the compounded and intersectional impact of the crisis that can leave them more vulnerable during conflicts or the loss of income.

Even though they are at the forefront of humanitarian efforts in their communities, they are not included in the decision-making process of how humanitarian aid is disseminated to even the most vulnerable groups.

Sima Bahous, Executive Director of UN Women, said: “It’s critical that the humanitarian response in Ukraine takes into account and addresses the different needs of women and girls, men and boys, including those that are furthest left behind…Women have been playing vital roles in their communities’ humanitarian response. They must also be meaningfully involved in the planning and decision-making processes to make sure that their specific needs are met, especially those related to health, safety, and access to livelihoods.”

Erika Kvapilova, UN Women Representative for Ukraine agreed. She said the organization’s contribution to the humanitarian response highlighted the importance for targeted aid to be “fully informed by women’s and girls’ needs and priorities. For example, the most recent Flash Appeal informed by the findings of the Rapid Gender Analysis in Ukraine provides sex-disaggregated data of the targeted population and underlines the importance of gender and age responsive protection, assistance, and access to humanitarian aid and services. It also calls for increased action to prevent sexual exploitation and abuse.”

However, she was concerned about women’s representation in decision-making.

“In the CSO survey conducted by UN Women in March, women have reported that they are being excluded from important decision-making processes at all levels, whilst at the same time being forced to play a critical role in the humanitarian response.”

Foran said women activists from Ukrainian civil society and women’s organizations were present and vocal in the sector coordination meetings.

“Now the partnerships with women’s organizations are increasingly in place, it’s really critical we see humanitarian action accommodate Ukrainian women’s existing and organic activism and leadership and adapt programming in line with the advice they give through reports like this CARE/UN Women Rapid Gender Analysis and in the many forums they attend.”

This debate about the role of women in crises was again highlighted in a UN Women Media Compact event. The discussion focused on the findings of the report and media experiences reporting on the war in Ukraine through the lens of gender.

Felicia Dahlquist, Programme Analyst from UN Women’s Ukraine office, and Siobhan Foran, CARE Gender in Emergencies Coordinator took to the podium and agreed that there was a need for gender-responsive and socially inclusive humanitarian efforts. This response could address the needs across different sectors, from providing shelter and non-food items (NFI) and education to lessening the care burden on mothers at home.

Dahlquist and Foran acknowledged that multiple areas need to be addressed all at once in a crisis. This runs the risk of other factors such as gender and diversity competing for attention.

Another recommendation was to increase communications to ensure accountability to the affected populations. This would mean implementing feedback and complaints mechanisms to ensure effective procedures and diverse communications channels to disseminate information on humanitarian aid to various groups.

A key topic of discussion was the role that media could play in reporting the stories of women, men, and minority groups on the humanitarian front.

The speakers said that the media has the ability, and thus a responsibility to address the ongoing issues that women and minorities deal with, to present the nuance and complexity of their experiences within the context of their intersectional experiences.

The media have the potential to reflect the voices of these communities to the general public but also get the attention of donors and humanitarian agencies to increase their efforts to support women-led organizations.

Even as donors and humanitarian agencies are expected to be pragmatic in their program planning and implementation approach, Dahlquist said it is essential to remember the humanity of the people who need this aid.

The media could play a key role in showcasing that human element, especially among those groups that receive less coverage in the news, such as ethnic minorities and the LGBQTIA+ community.