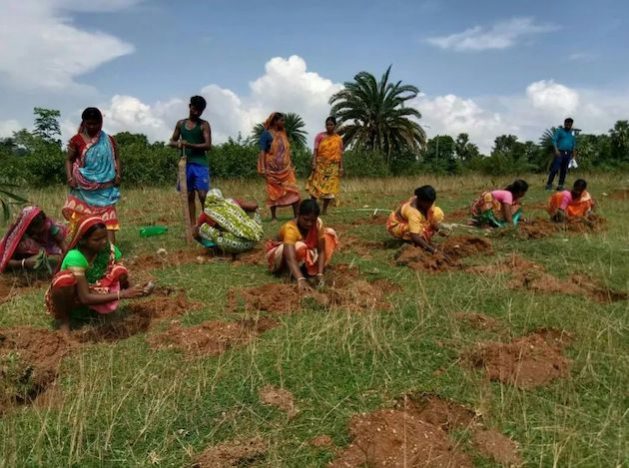 Jhargram, India, Oct 24 2022 (IPS) - At Jhargram, a far-flung village in India’s West Bengal state, a group of farmers sit together in one of the open fields. They debate, deliberate, and confabulate about the marketing strategy they should use when selling their harvest on the open market.

Two years ago, the scenario in the village was completely different. The farmers were perturbed by sudden market inflation—a price hike on seeds, fertilisers, and saplings. On top of that, they were worried about climate change and the damage that occurs with the changes in weather patterns—late monsoons, unseasonal rains, and extreme heat waves.

The state of West Bengal is located in the eastern region of India along the Bay of Bengal. It was in this Indian state that Britain’s East India Company started doing business before it went on to rule almost the entire South Asia.

West Bengal is primarily an agricultural state. Despite covering only 2.7% of India’s geographical territory, it is home to approximately 8% of its 1.3 billion population. There are 7,1 million farming families, with 96% being small and marginal farmers in West Bengal. The average land holding is only 0.77 hectares. The state has a broad set of natural resources and agro-climatic conditions that allow for the production of a wide range of crops.

However, over the past few years, farmers here have been reeling in distress.  According to recent research conducted to determine the intensity of the agrarian crisis in the region, agricultural produce returns for farmers were meagre.

Jayanta Sahu, a farmer from Jhargram village, recalls how the drastic price rise of seeds and saplings put farmers like him in dire straits.

“We belong to the village, which is far away from the city. It takes hours of bus rides to reach the markets. Hardly a bus drones through this place. This was why we used to rely mostly on the middleman to supply seeds, fertilisers, and related entities required for farming. They used to take their commission from the supplies, and we were left with extremely high-priced material,” Sahu told IPS.

He adds that several issues have afflicted the farming sector in the past, including loss of agricultural land, a shortage of local seeds and seedlings, irrigation, and a lack of agricultural infrastructure, manures, fertiliser, and biocides.

But above all, said Sahu, the plummeting income from farming left them feeling “wretched” in more ways than one.

“We couldn’t even cover the basic expenses of our family through the meagre income from agriculture. Our finances were strained by inflation and climate change. We were really helpless before such a tumultuous situation,” Sahu said.

Another farmer, namely Mongal Dash, recalls how he was about to bid adieu to farming forever and instead do menial jobs like working as a daily wage labourer in the main town. “We were fighting a battle on multiple fronts—the low yields of our crops, the high cost of fertilisers and seeds, and climate change. The middlemen who used to supply us with the seeds raised the basic cost four to five times. We had no option left but to buy from them. The degraded quality of these seeds would result in low yields and, ultimately, low incomes,” Dash told IPS.

Witnessing insurmountable predicaments coming from all sides, the farmers last year sat together to decide a future course of action. It was like either they would perish or prosper. After hours of deliberations, they identified the key issues concerning them and how they should address them as a priority. One of the major hurdles was the involvement of middlemen or commission agents in procuring seeds. Another hurdle was the long distance to the city, which made it difficult to procure seeds and fertilisers for themselves.

At this time, they deliberated over a strategy to produce their own seeds and saplings that they could grow and make profitable yields.

The village, with more than 250 households, identified six veteran and experienced farmers who were tasked with producing their indigenous seeds and saplings. These farmers were trained in seed preservation, seed bed making, organic manure preparation, and pest control.

About an acre of land was identified. Seedbeds for Tamara, cabbage, cauliflower, and chilli, with an estimated 9000 saplings, were prepared there. The farmers resolved that no chemical fertilisers or pesticides would be used on seedlings or seed beds—everything was grown organically.

The saplings were distributed at a low cost to the farmers in the village based on their needs.

Now, when more than a year has passed, the endeavour these otherwise crisis-stricken farmers have made is beginning to yield the desired results.

“We are no longer dependent on the outside market for seed procurement. We do not use chemical fertilisers, nor are we importing any degraded saplings from outside. Our village is becoming self-reliant in this regard, and we are very proud of this,” says a local farmer Shyam Bisui.

The farmers, who otherwise had to invest about one-third of their yearly earnings on purchasing inorganic seeds and chemical fertilisers, now save most of their money because organic manures are used. Seeds are prepared in the village.

“The yields are subtly growing, and so are our hopes of good living. We are sure our earnest efforts will bring us prosperity, and we will never perish,” the farmer said.