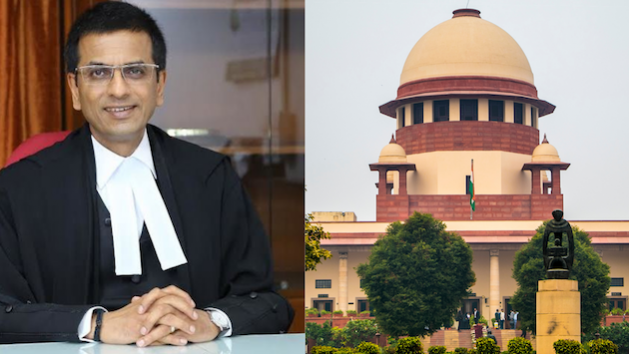 India’s new Chief Justice, Dhananjaya Y Chandrachud has significant challenges ahead as activists hope he will continue with his legacy. Credit: Subhashish Panigrahi and Charmanderrulez

Lucknow, Dec 14 2022 (IPS) - India’s new Chief Justice, Dhananjaya Y Chandrachud, has a significant challenge ahead – as activists and minorities remain hopeful that he will remain true to his legacy of delivering judgments that enshrined the Constitution, especially on personal liberty.

Sanjay Kapoor, founder editor of Hardnews Magazine and political analyst told the IPS that many of the rulings by Indian courts in recent times have been deeply disturbing.

“In the name of national security, draconian laws are evoked to curb personal liberty. Journalists and activists have been arrested and locked away under anti-terror law without evidence,” said Kapoor.

He gave the example of Siddique Kappan, who has remained in jail for more than two years for unknown reasons. Kappan got bail from the Supreme Court, but anti-money laundering laws were immediately slapped upon him to ensure that he remained in prison.

Kapoor’s main concern is the undermining of courts by the government, which is sure to weaken institutions and harm democracy in India.

Meanwhile, the CJI also warned that he was not here to do miracles.

“I know that challenges are high; perhaps the expectations are also high, and I am deeply grateful for your sense of faith, but I am not here to do miracles,” Chandrachud said after his appointment.

The challenges facing the judiciary include a backlog of cases, delays in appointing Supreme Court judges, and significant inconsistencies in judicial approaches.

Soon after Chandrachud took oath on November 9, Chandrachud expressed concern over the long list of requests before the Supreme Court for bail. He said that district judges are reluctant to grant bail in a fair manner out of fear of being targeted.

Activists say that this is the same reason that media personnel, political opponents, and social activists are languishing behind bars without bail today.

Activist Teesta Setalvad was arrested in June 2021, and her bail plea was only accepted three months later when she was finally released. There are others, like student leader Umar Khalid, who has languished in jail for more than two years.

The judicial system in India is under tremendous pressure. Until last May, countless cases were pending in courts across different levels of the judiciary. Many of the cases were pending in subordinate courts, a large percent in High Courts, while a hundred thousand cases have been pending for over 30 years. Amid the rising trend of litigation, more and more people and organisations seek justice from courts today. However, there are not enough judges to hear the cases. The courts are overburdened, and the backlog of cases is intimidating.

The reluctance to grant bail to especially political opponents has only aggravated the matter. Most recently, Sanjay Raut, senior opposition party leader, said that he had lost 10 kgs while in prison. The legislature was accused of money laundering. He was in jail for 100 days before bail was granted to him in November. He was kept in a dark cell where he did not see sunlight for 15 days.

The use of the justice system as a political tool and reluctance to grant bail at the district level has clogged the higher judiciary with far too many cases.

“The reason why the higher judiciary is being flooded with bail applications is because of the reluctance of the grassroots to grant bail, and why are judges reluctant to grant bail not because they do not have the ability to understand the crime. They probably understand the crime better than many of the higher court judges because they know what crime is there at the grassroots in the districts, but there is a sense of fear that if I grant bail, will someone target me tomorrow on the ground that I granted bail in a heinous case. This sense of fear nobody talks about but, which we must confront because unless we do, we are going to render our district courts toothless and our higher courts dysfunctional,” Chandrachud said at an event hosted by the Bar Council of India last week to felicitate his appointment as the country’s 50th CJI.

The Supreme Court of India is perhaps the most powerful Court in the world. However, in recent times the judiciary has been criticised for its uneven handling of cases. It is under scrutiny over contradictions found in its functioning. The fact that a former CJI accepted a seat in the upper house of parliament soon after his retirement two years ago had raised eyebrows.

The judiciary’s perceived deference to the present government is a major concern, including the ongoing arrest of political opponents, and refusal to grant bail to those arrested is becoming the norm. On the other hand, ‘friends’ of the ruling party are allowed to get away with murder and rape.

The nation was shocked after a document was made public last October as proof that the premature release of 11 men convicted for the gang rape of Bilkis Bano and the killing of her family during the 2002 Gujarat riots was approved by the home ministry despite opposition by a special court. A Communist Party of India (Marxist) member Subhashini Ali, journalist Revati Laul and Professor Roop Rekha Verma together filed a public interest litigation (PIL) against a remission granted to 11 convicts who were released on August 15, India’s 75th Independence Day celebrations this year on account of good behaviour.

Bano was gang-raped along with 14 members of her family. Her 3-year-old daughter Saleha was killed by a mob in a village in the province of Gujarat as they fled communal violence in 2002. Bano was 19 years old and five months pregnant at that time. Shobha Gupta, the lawyer for Bano has battled for years for the rape survivor to get justice. Gupta told Barkha Dutt, a senior journalist, that she is shattered and unable to face Bano. That after the release of her rapists from custody, Bano is silent and feels alone.

Dutt had interviewed Bano 20 years ago. Today she wrote in her column that an unspeakable injustice is unfolding with brazen impunity. Its legality is dodgy. Dutt said, “Let’s raise hell”.

After the men who raped Bano and killed her child were freed, they were greeted outside the prison with sweets and garlands. This is the story of a very seriously ill nation, columnist Jawed Naqvi said.

“The nation that was baying for the execution of men who raped a young woman in a bus in Delhi in 2012 seemed deaf to Bilkis’s trauma,” Naqvi wrote. The executive has turned its back on Bano. The media is disinterested and civil society has been bullied into silence at a time when principles are passe for most politicians.”

So who will give justice to citizens like Bano?

In a plea filed by Azam Khan last July, the opposition party leader pointed out a new trend amongst the high courts to impose unnecessary bail conditions. Khan said that a high court had ordered the politician to hand over allegedly encroached land as a condition for bail. The ruling was overturned.

Seeking justice these days is tough within the courts and outside.

The 74-year-old Khan has been behind bars since early 2020. Multiple charges have been slapped on him, including corruption, theft, and land grab, in an effort to make sure that he remains behind bars on some charge or the other. However, Khan was granted interim bail last May. A few months later, he was fined and has been sentenced to three more years in prison for a hate speech made in 2019. At that time, Khan was accused of blaming the Prime Minister for creating an atmosphere in the country in which it was difficult for Muslims, the largest minority community in India, to live.

A new report published by the USA-based NGO Council on Minority Rights in India (CMRI) and released on November 20 at New Delhi’s Press Club found that by helping offenders, detaining victims, and failing to register first information reports (FIR) in some cases, law enforcement agencies play a role in furthering hate crimes.

Discussing the legal aspects of persecution, lawyer Kawalpreet Kaur said that minorities are facing the brunt of the state to varying degrees. Cases of the pogrom against Muslims during the Delhi riots have been lying in the high court for the last two years.

“Indian courts need to keep their eyes and ears open; it is not a one-off case of Afree Fatima’s house bulldozed or when the stalls of working-class Muslims were razed in Delhi despite a stay from the court,” she said.

The lawyer called it an attack by the Indian state against its minorities and a campaign of misinformation and Islamophobia witnessed every day.

The release of the CMRI report comes at a time when numerous countries and organisations are calling upon India to take stock of the plight of its religious minorities.

Six international rights groups – the International Federation for Human Rights (FIDH), World Organisation Against Torture (OMCT), Christian Solidarity Worldwide (CSW), Inter­national Dalit Solidarity Network, Amnesty International, and Human Rights Watch have reminded New Delhi in a joint statement that it is yet to implement recommendations of a recent UN report on India which cover topics which include the protection of minorities and human rights defenders, upholding civil liberties, and more.

“The Indian government should promptly adopt and act on the recommendations that United Nations member states made at the UN Human Rights Council’s Universal Periodic Review process on November 10,” the joint statement read.