KARACHI, Sep 29 2008 (IPS) - Rape and sexual violence are endemic in Pakistan, but cases are rarely registered. Few survivors and their families can withstand the pressure to compromise with the assailants over the years the cases drag on. 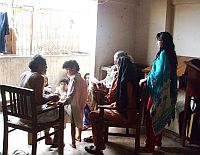 A volunteer speaks with rape survivor Naseema, who has taken refuge in Karachi along with her family. Credit: Beena Sarwar/IPS

The independent Human Rights Commission of Pakistan (HRCP) recorded 755 cases of sexual harassment in 2007, including 377 cases of rape (166 minors) and 354 cases of gang rape (92 minors). Activists believe that the actual number is higher since most cases are never reported due to social, legal and economic repercussions.

Most alarmingly, says HRCP, the accused are "predominantly influential people in the community or landlords… residents of the victim's community" (Report on Trend Analysis of Human Rights Violations- 2005 and 2006).

Even the high-profile case of Mukhtaran Mai, gang-raped by locally influential people in 2002, is still pending before the Supreme Court. Instead of keeping quiet, she pursued the case, using compensation money from the government to set up the first schools in her village. As she acquired international celebrity status, the government had to provide her police protection so she was able to stay on in her home, unlike others in similar situations.

"Here in Pakistan, the survivor is safer when her identity is made public," says Owais Aslam Ali who heads Pakistan Press Foundation, a media training organisation. "In rural areas particularly, where everyone around already knows what happened and who was involved, not naming her makes her more vulnerable to threats."

The Soomro and Lubano cases, as well as the families, were transferred to Karachi for safety reasons. There are eleven members of Kainat’s family in Karachi. Naseema is here with her parents, six younger siblings, and her uncle’s family with their six children whom she refuses to part with.

They have managed to survive with help from the War Against Rape (WAR), a Karachi-based non-profit organisation whose understaffed team and volunteers reaches beyond its mandate of legal aid and psychological counselling to help the rape survivor’s entire family long after media interest has died down.

"It will be a long haul, at least seven or eight years," warns advocate Faisal Siddiqui who has been working pro bono on these cases.

"Meanwhile, there has to be a long-term plan to deal with the issues these families face," he added. Security, long-term sustenance, and other issues arising from their displacement – shelter, loss of income, disruption of children’s education and loss of self-esteem.

Back home, Kainat’s father Ghulam Nabi Soomro, the respected president of the transporters’ union, was once able to support his family comfortably. His sons were working, and so was his daughter-in-law Tasleem, a para-medical nurse (lady health visitor). Now their economic situation is precarious.

Tasleem’s application for a transfer to Karachi has been stuck at the health ministry for months. "You know that nothing happens without ‘Quaid-e-Azams’," she says wryly, referring to the currency notes officials want in order to ‘move the file’. Meanwhile, she is looking for other jobs and has also embroidered some cloth pieces to sell. So far, there are no buyers.

Her husband Noor Nabi brings in a paltry Rs 2,000 (35 US dollars) a month. A recent donation enabled his brother, 17-year-old Bilawal, to rent a pushcart and buy cosmetics to sell on the street below.

"We don’t like him going further because they (the perpetrators) are still around," the elder Soomro told IPS, adding, "before, I always held my head high. Now, my head is bent. I feel driven to the point of suicide…"

The Lubanos also feel desperate. There are no educated adults in the family. They sleep on the floor in a fifth floor apartment in downtown Karachi that a kindly political worker has allowed them to use.

"Thanks to him, we have a shelter. Otherwise, we would be out on the streets," Naseema’s father Hamza Gaman Khan, a grizzled, sturdy 50-something told IPS, his voice nearly drowned by the din of buses in the street five floors down.

A dozen sleepy children huddled in one corner of the verandah. One girl had scratch marks on her face – from a fight with Naseema, she said. Tensions are exacerbated by being constantly cramped together. Naseema, like Kainat, twists and untwists her thin fingers constantly.

Brought up in a rural setting, the children are afraid to step into the busy street below – and of other threats. "If they kidnap a child, we would be terribly weakened," said Hamza.

The women started stitching a rilli (traditional patchwork) to sell but ran out of material before they could complete it. They are too afraid to go to the market to buy more, even if they had the money.

They cannot afford to pay for electricity, gas, or water. They bring buckets of water from a community tap near the apartment building. Their ‘stove’ is two bricks fired by crate-wood. Donations are spent on essential food items. That day, food had run out – they had been subsisting on tea since the day before.

"We can bear anything but we can’t bear to see the children hungry," said Hamza, his eyes welling over suddenly. "I never saw him cry before," Nasreen Siddiqui, a WAR volunteer, told IPS. "He is always so strong and courageous."

Naseema’s younger brother Ali Asghar, 16, was then the only earning family member, working long hours in a restaurant kitchen. With no money for transport, he walked the eight km there and back every day.

Now, WAR has found a sponsor to give Asghar a stipend, enabling him to return to school, and got the multinational company for whom Hamza worked back home to give him a job at their Karachi warehouse. Their lives may be limping back to normalcy.

Both families told IPS that if they were to agree to a compromise and drop their cases, they would be able to go home. That is an option they are not willing to consider.