LUCANAMARCA, Peru, Jun 30 2011 (IPS) - Fuchsia, green and turquoise yarn shuttles swiftly across the wooden loom Dora Huancahuari has learned to use. Together with other craftswomen, she has started a small weaving business which is helping to rebuild their lives in this remote, poverty-stricken Andean community torn by Peru’s history of armed conflict. 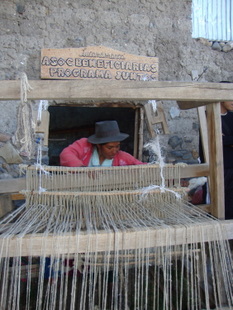 Vilma Matías weaving on a loom at the Lucanamarca workshop. Credit: Milagro Salazar/IPS

It is Saturday afternoon and there is hardly anyone about in Santiago de Lunamarca, the capital of the municipal district of the same name, perched on the eastern Andes highlands at an altitude of 3,490 metres above sea level, among deep valleys and steep mountains in Huanca Sancos province, in the southern Peruvian region of Ayacucho.

Most of the local people are still working in the fields, but three women have got together to weave colourful woollen blankets, sweaters and bags.

“We’re gradually making a start on our woven goods, which we will sell later on in Huamanga (another name for Ayacucho, the regional capital) to make money for our children,” Huancahuari, a 42-year-old mother of five, told IPS as she wove steadily without missing a beat.

Lucanamarca, with a population of 2,700 and an average monthly family income of barely 62 dollars, is in the category of the extremely poor municipalities, and has the lowest human development index in Huanca Sancos province, according to the 2005 United Nations Development Programme (UNDP) report.

Ninety-five percent of the townspeople are indigenous Quechua or Aymara speakers; only 2.4 percent have plumbing at home; only 480 households own radios and 84 have a TV set. Farming and livestock are the economic mainstays, especially potato and alfalfa cultivation and sheep-rearing.

On top of this litany of unmet needs, an episode of Peru’s 1980-2000 armed internal conflict filled Lucanamarco with grief and unhealed wounds.

Ayacucho was the region most heavily affected by clashes between the Maoist guerrilla group Sendero Luminoso (Shining Path) and the armed forces, and Lucanamarca was the scene of one of the worst massacres during the conflict.

On Apr. 3, 1983, a group of Shining Path guerrillas murdered 69 townspeople with axes and machetes, including men, women, children and elderly people, in revenge for the town’s refusal to follow the insurgent group’s orders.

“After events of such cruelty, the community wasn’t the same. People didn’t want to participate in community work, and were indifferent to any initiative,” Ángel Huamanculí Matías, who became the mayor five months ago, told IPS.

The women of Lucanamarca’s weaving project is a struggle against that apparent apathy, which according to many of the townspeople is derived from the desire to forget and bury painful memories.

The first stage of the project is being carried out in Lucanamarca and the nearby community of Carmen de Alanya, where women have formed a legally-recognised association for the sale of their woven goods and are developing into a small cooperative.

“During the period when violence reigned, the social fabric was destroyed. That’s why the weaving project was devised, so that women could unite around a common aim, as well as improve their lives,” historian Carola Falconi of the Human Rights Commission (COMISEDH), a Peruvian NGO, told IPS.

Every woven thread is a step towards rebuilding their lives, and that of the town.

To guarantee the viability of the project, COMISEDH has been working since last year with beneficiaries of the government social programme Juntos, which provides the equivalent of 36 dollars a month to mothers living in extreme poverty.

There are more than 50 beneficiaries in Lucanamarca, 10 of whom have become involved in the weaving project. “We mended some looms that had been abandoned, and we brought in a weaving teacher to train the women,” said Ramiro Valdivia, the area head of COMISEDH.

The plan is for the women to form a registered association, so they will be eligible for microcredits. Then they will be able to manage their own resources and sell their products directly in Ayacucho, which is an arduous six-hour journey along a winding road from Lucanamarca, although the distance is only 180 km.

At present, COMISEDH acts as the intermediary for sales of bags embroidered in the Peruvian capital, 360 km northwest of Lucanamarca and an eight-hour journey by road.

“By weaving my own blanket, I save 60 soles (22 dollars), which helps pay for schooling for my two children,” said 29-year-old Vilma Matías.

Like most of the people in the town, she lost a family member in the 1983 massacre. “My brother is still up on the highlands. They told my mother: ‘Don’t bring his body down, or they’ll kill you.’ So that’s where my brother still is (buried),” she said, as she organised her coloured yarns.

Matías was very small when the massacre took place, but she managed to reconstruct what happened from the accounts of other townspeople. Her mother never spoke about the dreadful episode.

“Now we want to get ahead, and here we are,” she said, adding that her husband is not upset by her interest in weaving and the association she is creating with other women, but does not encourage her either. “He doesn’t say anything, so I just come,” she said in halting Spanish, since her mother tongue is Quechua.

But the project faces quite a struggle. Machismo is the rule in Lucanamarca, and the women who benefit from the Juntos programme are seen by some men as neglecting their responsibilities and even as unfaithful, according to a 2010 study by COMISEDH that was part of a broader social assessment of the area.

“They are accused of disregarding their husbands’ wishes and not fulfilling their domestic responsibilities. In the view of the (municipal) authorities, the Juntos programme has caused family separation on a mass scale, as well as increased adultery,” says the study, pointing to the predominant sexist attitudes in this region.

Community decision-making is still in the hands of men, and there is only one woman on the municipal council.

Family and gender-based violence is the main social problem in the area. In 2009 and 2010, two women were killed by their partners or former partners, and a young woman was raped and killed, the COMISEDH study says.

“Because of the complexity of the situation, the plan was to take some small steps forward with a project that connected directly to these women’s needs and gave them the opportunity to socialise together more. Little by little, the way is opening up,” said Falconi.

The concentration and dedication with which the three women weave on their looms on an ordinary Saturday afternoon seems to bode well for the project.