Many are also pointing to the U.S. government’s potential role as key. 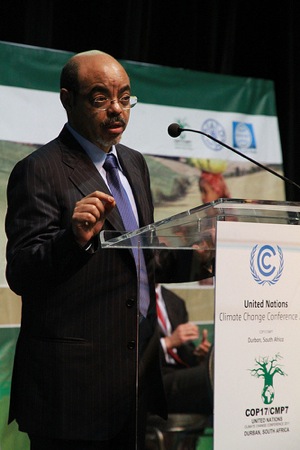 “Meles’s death has created an opportunity for peace in Ethiopia, meaning that this transition should not be business as usual,” Getachew Begashaw, a professor of economics at Harper College here in the U.S., told IPS.

“This process needs to be something…that can put the country on the road to national reconciliation. It is important for the United States to realise that its long-term interests would be served best if we can resolve the internal conflicts of Ethiopia.”

The potential for sectarian violence has been a top concern for those attempting to plan for the death of the Ethiopian leader, who had been sick for several months. Meles ruled with an increasingly authoritarian fist for more than two decades, and many worry that his absence could leave a political vacuum.

Still undetermined is the impact that Meles’s death will have on ongoing negotiations between Sudan and South Sudan, as well as in Somalia, talks in which the Ethiopian leader has provided leadership. Currently, however, the focus for many is on more immediate concerns.

“I am afraid that a missed opportunity at this crucial point will lead to the total failure of the Ethiopian state,” Begashaw said. “Once the situation turns violent, it will be extremely difficult to turn around – we will have another Somalia. And if Ethiopia were to fail, the whole region would be massively affected.”

For all the talk about Ethiopia’s recent economic revival, many warn that this development has yet to reach the vast majority of the country’s population. Instead, much of this wealth – and political power – has been retained by the ruling party and, particularly, by the tiny Tigrayan minority community to which Meles belonged.

Already Meles’s deputy prime minister, Hailemariam Desalegn, has been put forward to rule until elections can be held in 2015, although a meeting of Parliament to make this move official, slated for Wednesday, was suddenly called off.

“Meles Zenawi’s whole policy was based on short-term interest – what’s good for him, not what’s good for his nation. Today, Ethiopia is more divided today by ethnicity than ever, and that is his fault,” Obang Metho, executive director of the Solidarity Movement for a New Ethiopia, based here in Washington, told IPS.

“The U.S. in particular used Meles as puppet. For the last 20 years, they’ve put their eggs in one basket, and that basket is now gone. So, it’s time to start a new plan, one that supports the Ethiopian people and is based on mutual national interest.”

Metho and others particularly emphasise the role of the United States in the upcoming transition. The two have a long and contested relationship, as Washington has funnelled huge amounts of military and development aid to the Meles regime, particularly following the start of the US-led “war on terror”.

Today, the United States continues to run unmanned aerial “drone” flights out of a base in Ethiopia. The U.S. also continues to provide significant humanitarian aid to Ethiopia, which currently brings in more foreign aid than any other country in Africa.

“The United States must seize this opportunity to recalibrate its relationship with Ethiopia and help to build strong, accountable institutions and respect for the rule of law, lest it risk…a relationship with yet another ‘strongman’ and depend on the luck of the draw over his longevity,” Amnesty International said in a statement Tuesday.

The International Crisis Group, in a report released Wednesday, similarly called on the United States, in concert with the U.K. and E.U., to “seek to play a significant role in preparing for and shaping the transition”, especially by working to strengthen capacity within the opposition.

While the initial U.S. response , including condolences from President Barack Obama and Secretary of State Hillary Clinton, merely commended Meles for his role in strengthening Ethiopia’s democracy and economy while also noting his efforts in the civil war in Sudan, subsequent days have seen a slight shift in tone.

“We have not been shy about expressing concern … with regard to journalists’ freedom, human rights, etcetera,” State Department spokesperson Victoria Nuland said Wednesday. “We would always look for further improvements that can strengthen the system and support for people across Ethiopia.”

Strengthening the opposition and loosening the reins on civil society generally is particularly important, Begashaw said, in turning away from the spectre of potential ethnic strife in a post-Meles Ethiopia.

He said the United States needs to play a role as a “credible peace broker between the opposition and the ruling party”, ensuring that the country’s politics open up, that political prisoners are released, and that organisations outlawed by Meles on grounds of “terrorism” are reinstated.

“These groups must be given the legitimate right to peacefully to participate in the political life of the country,” Begashaw said. “We can only have peace when we are trying to accommodate everyone, so long as they are peaceful – and as far as I know, all opposition groups would like to participate peacefully.”

Doing so, he explained, will buy time, allowing civil-society leaders and community opinion-makers to “go out and start talking to political activists, encouraging them to give a chance to peaceful resolution rather than armed conflict.”

Still, others suggest that the remnants of Meles’s regime remain so strong that there is little reason to expect an outbreak of violence anytime soon.

“The ruling party is so dominant that I seriously doubt that there will be internal turmoil. They control 99 percent of the seats at the federal, regional and local levels,” a former U.S. official and Horn of Africa expert told IPS on condition of anonymity.

“Look at the restructuring that has gone on in the past several years – the removal of the old senior leadership, bringing in a new generation of leaders, including the deputy prime minister. I think Meles knew how important a smooth transition was and saw this as the process of handing power to the next generation.”

Metho hinted that incorporating the ruling regime could well prove to be an important part of the opposition’s strategy.

“We need to make the ruling minority realise that this is a new chapter: you have nothing to be afraid of; there’s room for you in the new Ethiopia,” he said. “The old system has to be torn down, but they can be part of this.”