Market Gardening, a Ladder to Progress for Bolivians in Argentina 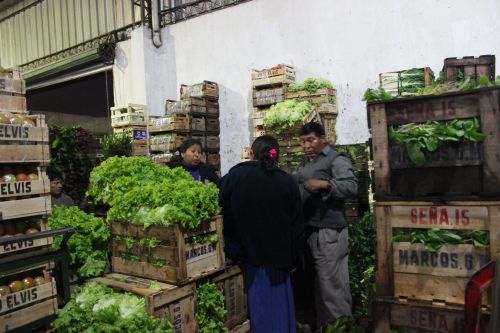 Fresh produce market in Escobar, a symbol of the progress made by the Bolivian community in Argentina. Credit: Marcela Valente/IPS

BUENOS AIRES, Oct 9 2012 (IPS) - At the age of 53, Alberto Ramírez has come a long way since he came from Bolivia to Argentina every year during the harvest season since he was 12 years old, to work alongside his father. He now has a prosperous vegetable and fruit wholesale business in this city on the outskirts of Buenos Aires.

Ramírez, who today heads the Bolivian Collectivity of Escobar, receives IPS in a spacious office built above the local wholesale market where fruit and vegetables grown by Bolivian immigrants are sold.

Only produce from Bolivian farmers is sold here – a rule so strict that if something is needed, trucks are immediately sent out to other parts of the country to purchase it from Bolivian garden farmers.

The market, which operates on six hectares in Escobar¸ 50 km from the Argentine capital, was created in 1990 and now supplies dozens of towns in the northern part of Greater Buenos Aires.

When the market opens at 7:00 PM, it becomes a hive of activity until dawn the next day, with industrious workers pushing carts along the narrow corridors between the towering stacks of crates of fruit and vegetables.

Both men and women work in production, purchasing and sales. But it is the women who are the least willing to be interviewed when approached by IPS amidst the neat crates of tomatoes, strawberries or aubergines.

Nearby is a market that sells to the public during the daytime, football pitches, and a cultural hall where last year the community welcomed Bolivian President Evo Morales, who now smiles down from a photo hanging on the wall next to Ramírez’s desk.

“Come back, we are waiting for you with open arms,” the left-wing indigenous president told Bolivians in Escobar at the time, after telling them about the progress made by his country since he first became president in January 2006.

But many of Morales’ listeners here are doing well and have no plans to return to South America’s poorest country.

They visit Bolivia once or twice a year, and on almost every trip they come back with one relative or another who comes to work in the community’s garden farms here.

However, fewer and fewer Bolivians are coming here, said Ramírez, because they now have better opportunities in Bolivia.

“My family and I have set down roots here. I used to come with my father for the tobacco harvest. I was 12 years old. At 22 I came back with my wife, and we stayed in Escobar. We started out as farm-hands, but now I changed my area of work,” he said proudly.

The couple managed to climb the social ladder, from farm labourers to sharecroppers, and eventually were able to rent one hectare of land and become independent farmers. “We didn’t care if we had to work 14 hours a day, because it was for our own benefit,” he said.

Ramírez, who has children and grandchildren born in Argentina, now has his own business selling produce wholesale.

But the case of Ramírez and the market in Escobar, which has some 900 partners, is not unique in this South American country. The progress made by Bolivian farmers who grow fresh produce can be seen on the outskirts of just about every sizeable town or city in Argentina, from north to south.

“There are at least eight wholesale markets run by Bolivians in the northern part of Buenos Aires alone, and this predominance is also seen in other urban green belts around the country,” Roberto Benencia, a sociologist, told IPS.

“This is a case of successful migration…Some of them are doing really well, have a good standard of living and no longer think about going back to their country, because they invest and spend their money here,” says the author of a study on “Bolivian immigrants in the labour market of fresh produce in Argentina”.

Bolivians make up the second-largest community of immigrants in Argentina today, after Paraguayans. Bolivians began to arrive in the 1930s to work in construction and manufacturing, or as seasonal farm workers.

But starting in the 1980s, a growing number of Bolivians began to work in the production of fruit and vegetables, giving rise to “a process of growing social mobility that we call the ‘Bolivian ladder’,” sys Benencia, whose study was published by the International Organisation for Migration this year.

Recent arrivals start out as farm labourers, like Ramírez and his wife. They then become sharecroppers, keeping 45 percent of what they produce, which motivates them to work longer days, to save up money and get ahead.

Once they have some money saved up, they rent one or two hectares, and start farming for themselves. Some manage to buy land of their own, or get involved in buying and selling fresh produce.

In the central province of Córdoba, one of the most populous provinces, only 10 percent of farmers of fresh produce were Bolivians before the 1980s, according to Benencia’s study. But 20 years later, they represent 50 percent, and that proportion is growing.

Small-scale farmers from Bolivia have also settled in the province of Santa Fe in the east, Mendoza in the west, and Jujuy and Salta in the north, as well as in provinces much farther from Bolivia, like Chubut and Tierra del Fuego in the south.

“They created horticultural zones where there were none,” Benencia says. They did this by introducing new technology, such as sprinkler irrigation systems or greenhouses to protect the crops from freezing or from hail, he says.

In the case of lettuce, which is widely consumed in Argentina, they went from three to nine crops a year, using greenhouses. Benencia’s study also reflects the scepticism of Argentine market gardeners in the face of the Bolivians’ determination and dedication.

The study gathered the accounts of immigrants who remember Argentine farmers telling them that they were not going to manage to grow tomatoes in Córdoba or that they would not be able to grow other products, which in fact they initially failed to produce, in their first few attempts – until they were finally successful.

Today they produce a wide multi-coloured range of high-quality fruit and vegetables, in large quantities and at a low cost, supplying big cities with low-price fresh produce.

The suppliers of farm inputs interviewed for the study say Bolivian market gardeners are always seeking out the best quality seeds, and are interested in any innovations that enable them to boost their yields.

According to Benencia, horticultural production is shunned by Argentine farmers. Before the Bolivians arrived, this work was done by Portuguese, Italian or Japanese immigrants, communities that have already been almost completely pushed out of market gardening.

Ramírez says the lack of interest in this work on the part of Argentine farmers can be explained by the risky nature of growing fresh produce, and the long hours of work required.

“You don’t always win. There are freezes, hail, and sometimes you lose,” he says.