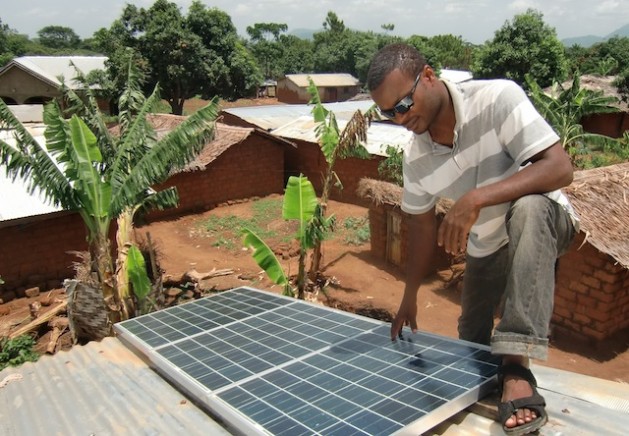 BAMENDA, Cameroon , Nov 8 2012 (IPS) - In the small farming village of Sabongari, in Cameroon’s North West Region, the need for kerosene to light bush lamps and petrol to run electric generators has been replaced by the need for something much cheaper and cleaner: sunshine.

In an open corner in the village of about 2,000 people, large sunlight-capturing solar panels stand tilted towards the sun. They form the mini-solar power plant that supplies the electricity grid here in this village that is some 700 kilometres from the country’s capital, Yaoundé. It is an unusual sight for rural Cameroon.

The grid supplies 30 homes, including the home of Ndzi Samuel, a local primary school teacher, three small shops and a local hotel with electricity 24 hours a day.

“My children can now read with good lights, and I am able to use a mobile telephone today with no problem although we also have very low network coverage,” Samuel told IPS.

Prior to the installation of the solar panels in 2011, this village relied on three electric generators owned by business people. It allowed the few people here with mobile phones to charge them, but the electric generators were unreliable and often short-circuited equipment.

“I lost three phones due to power surges from an electric generator. But with the solar panels I can easily charge my mobile phone and stay connected,” one villager told IPS.

While this west Central African nation may have the second-largest hydroelectric production potential in Sub-Saharan Africa – 103 Terrawatt hours per year at present – only 30 percent of that potential is being exploited, according to the Renewable Energy and Energy Efficiency Partnership (REEEP). And access to electricity in rural areas is low.

According to the World Bank, of the country’s estimated 20 million people, some 8.1 million live in rural areas and only 14 percent of those have access to electricity. It is a huge disparity compared to access in urban areas of 65 to 88 percent of the population.

The government has been encouraging the use of solar panels to generate electricity. In 2011 a law was passed declaring that those importing solar equipment would not have to pay Value Added Tax from the 2012 financial year.

“Solar power is a good opportunity for all in Africa. Africa’s position at the equator level makes this continent the sunniest in the world,” said Asanji Nelson, a renewable energy engineer at the Ministry of Mines, Energy and Water Resources (MINEE).

But reaching rural areas with this alternative power source is still a challenge because the costs of the solar panels still remain unaffordable to the rural poor who depend on subsistence farming for a livelihood. An overview of market prices shows that home panels ranges from 400 to 10,000 dollars.

“The final cost of a solar panel is still a major impediment to villagers as such; enterprises in Cameroon do not target the rural poor due to costs that cannot be borne by villagers,” Asanji told IPS.

According to figures from MINEE, there are more than 25 registered firms providing solar panels in Cameroon, but most of them target urban dwellers and businesses.

The Cameroon Solar Energy Company also provides sustainable energy to people, but mainly reaches an urban-based clientele who acquire solar panels as a backup in case of a general electricity blackout.

For the most part, they target other enterprises that use solar panels for business operations, the managing director Tebo Vincent told IPS.

Energie Cameroun is another solar firm based in Yaounde. They sell solar installations, and also install solar street lamps for rural communities.

“We are based in the city because we have better customers than we could possibly have in villages. But we also work in villages when customers hire us to install panels. However, our reliable customers are city dwellers,” Haman Sani, the commercial director of Energie Cameroun, told IPS.

“Rural communities need our products, but the cost involved in the whole chain is high; importation, taxes, transportation and installation are costs that determine the final value of our products. In order to cover those costs and to make a profit, we mostly deal with companies and missionaries who can readily afford it for community hospitals and schools,” Sani says

Renewable Energy Innovators(REI) was able to install the panels in Sabongari and 10 other rural villages thanks to international funding. 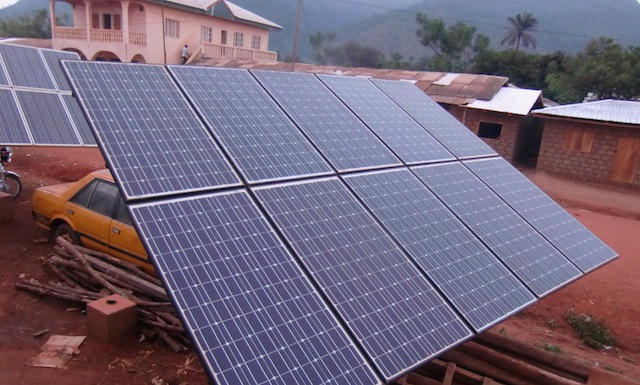 Numfor Jude, the president and co-founder of REI, explained that Wireless Light & Powers, a Canadian organisation that works to improve the lives of people in rural communities, supports them by providing material and financial resources for REI to travel to rural villages and by importing the solar panels into the country.

In Sabongari, the installation costs of the mini-solar power plant were minimal.

“The villagers are united by their common problem of lack of electricity. They showed interest in the project by contributing the money that covers the partial cost of installation. Each household contributed a sum of 25 dollars and businesses paid 100 dollars. A maintenance fee of one dollar each is expected from them monthly,” he said.

A local villager in Sabongari told IPS: “It is like being rescued from incessant darkness. We can charge our phones and make calls to other places at any time.”

Weriwu Godfred, the project director of a government solar street light scheme in Yaounde implemented five years ago, told IPS: “Solar equipment is still only for the rich and beyond the reach of the ordinary Cameroonian, despite the non-payment of VAT today.”

He worries about the fact that most communities have rural radios but audiences cannot power radio receivers. “It is even more sustainable to run rural and community radios with solar power that represents less risk to humans and appliances,” he said.

Meanwhile, Cameroonians are increasingly vocal about power shortages and blackouts, which have made energy an increasingly important political and economic issue.

Rising oil prices, increasing global energy consumption and concern for the environment have led to a renewed interest in renewable energy. Cameroon’s development objectives under the Vision 2035 programme envisage significant investments in the renewable energy sector.

Asanji said that: “Cameroon relies on approximately 30 aging diesel power stations as back-up facilities for its hydroelectric network, meaning our hydro source is not totally clean.”